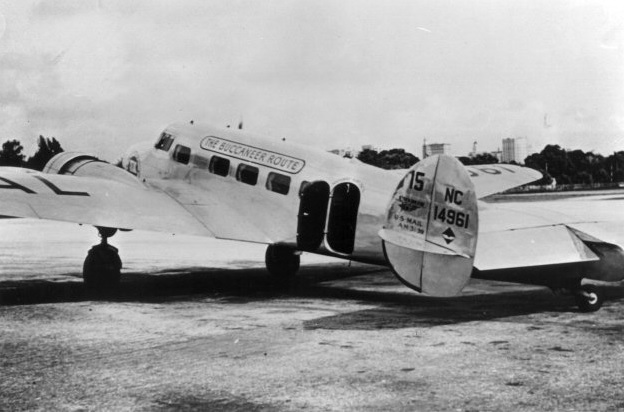 1930s
National Airlines was founded by George T. Baker in 1934, originally being headquartered in St. Petersburg, Florida and based at the city's Albert Whitted Airport. On October 15 of that year, revenue flights were launched, initially transporting passengers and mail from St. Petersburg to a few destinations within Florida using a fleet of two Ryan ST monoplanes. In 1935, the Stinson Trimotor was introduced with National Airlines, which were soon replaced by the Lockheed Model 10 Electra. In 1939, the company headquarters were moved to Jacksonville. By the end of the decade, the National Airlines network spanned from Miami to New Orleans, on what it called the Buccaneer Route. 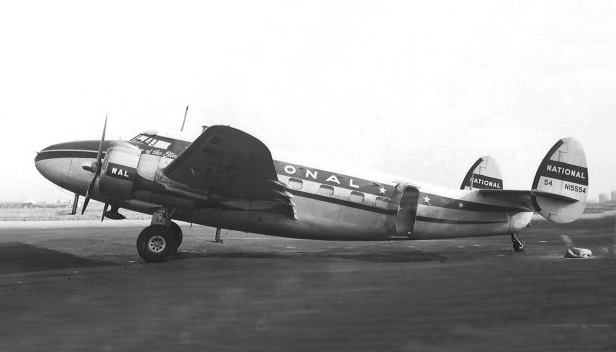 In 1940 the Lockheed Model 18 Lodestar became the backbone of National's fleet. National was awarded rights from Florida to New York City and other cities along the East Coast in 1944, with flights starting in 1945. In 1946 National got approval to fly to Havana, Cuba, which coincided with the introduction of the Douglas DC-4. The DC-4 allowed non-stop flights between Miami and New York that started on February 14, 1946. Later that year National relocated its headquarters to Miami International Airport; a maintenance base opened at Miami in 1950.
The Douglas DC-6, National's first pressurized airliner, began flights on July 1, 1947 and reduced New York to Miami flight time from five to four hours. Flights on the DC-6 were marketed as Star Service. National ran the Piggy Bank Vacations campaign, promoting low-fare flights to Florida during the off-peak summer season. 1950s
This decade saw the introduction of the Convair 340/440, the Douglas DC-7, and the Lockheed L-1049 Super Constellation. On December 10, 1958 National became the first airline to operate domestic jet flights, using a Boeing 707 leased from Pan American World Airways between Miami and New York. In 1959 the Lockheed L-188 Electra was introduced into the fleet as another new type for National and was the only turboprop aircraft type ever operated by the airline. At the end of the decade Houston and Boston were the ends of the network with heavy emphasis on service between Florida and the U.S. East Coast and Gulf Coast. 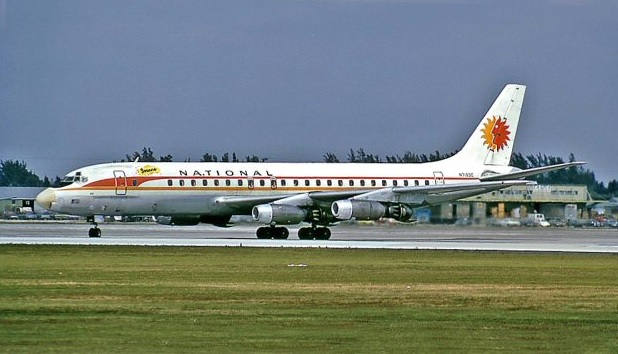 1960s
With the award of traffic rights on the southern transcontinental route on March 11, 1961, National Airlines gained access to California and began operating new Douglas DC-8 jetliners between Florida and Los Angeles and San Francisco with a number of flights making intermediate stops in Houston and/or New Orleans (previously, American Airlines, Delta Air Lines and National had together operated Douglas DC-6 and DC-7 propliner aircraft with interchange through-service between Miami and California). In March 1962, National was operating only one round trip transcontinental nonstop service: National flight numbers 34 and 35 between Miami and Los Angeles which were both flown with DC-8 jets. According to the front cover of its system timetable at the time, National billed itself as the "Airline of the Stars". Concerning international destinations in Central and South America, a cooperation involving interchange flights with Pan Am was set up. 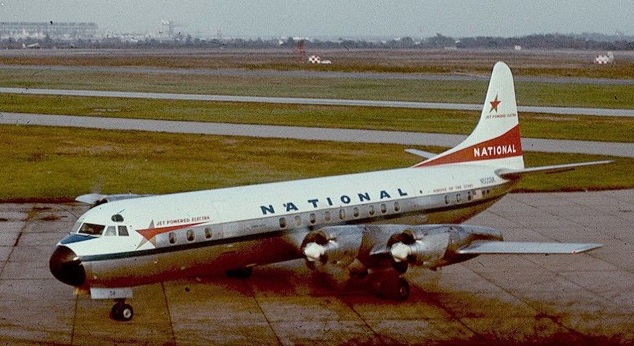 Also during the early 1960s, National inaugurated new service with the Lockheed Electra propjet to Las Vegas and San Diego. Eastbound coast to coast routes flown with the Electra at this time included San Diego-Los Angeles-Houston-New Orleans-Miami and San Francisco-Las Vegas-Houston-New Orleans-Tampa-Orlando-Jacksonville.[19] National was also operating other long, multistop routings with the Electra as this time such as Boston-New York City-Jacksonville-Orlando-Tampa-New Orleans-Houston-Las Vegas-San Francisco. National flight number 223 departed Boston at 7:30am and arrived in San Francisco at 8:42pm with this latter routing being flown on a daily basis. Total travel time for this flight was 16 hours and 12 minutes.
In 1962 Louis Bergman "Bud" Maytag, Jr. (grandson of Maytag Corporation founder Frederick Louis Maytag I), who had previously led Frontier Airlines bought a majority share in National Airlines and replaced George T. Baker as CEO. In 1960, the airline modernized its fleet with new Douglas DC-8 jetliners which were then followed by ten new Boeing 727-100 trijets, the first of which was delivered in 1964. After the retirement of the Electras in 1968, National became an all-jet airline with the DC-8 and 727. The Douglas DC-8 fleet included the stretched Super DC-8-61 which was the largest aircraft type operated by the airline until the introduction of new wide body jetliners such as the Boeing 747 and McDonnell Douglas DC-10. In 1969, National was operating the Super DC-8 nonstop between Miami and New York JFK airport and also nonstop between Miami and Los Angeles with these flights having specific names such as "The Royal Biscayne", "The Royal Dolphin", "The Gotham" and the "The Manhattan" between Miami and New York, and "The Californian" and "The Caribbean" between Miami and Los Angeles.
On July 26, 1969 the Atlanta-San Francisco nonstop route was awarded to National and service began on October 1, 1969. It was National's only route out of Atlanta.

A $17 million IBM electronic computer reservation system, called Res-A-Vision, was completed and put into operation in 1970.
On June 16, 1970 National Airlines reintroduced international flights, when their Miami-London route opened (flights to Cuba were suspended in 1961 due to the Cuban Revolution). With the London route, they became the third U.S. transatlantic passenger carrier, after Pan Am and TWA.
In October, the Boeing 747-100 jumbo jet, at that time the largest commercial airliner, entered service with National on the Miami-New York nonstop route on October 1, 1970 and the Miami-Los Angeles transcontinental nonstop route on October 25, 1970. National sold its 747s in May 1976. Also in 1970, National Airlines opened their own terminal at John F. Kennedy International Airport, which was dubbed the Sundrome.

Having placed an order for ten aircraft back in 1969, the wide body McDonnell Douglas DC-10-10 was put in service on the Miami-New York route on December 15, 1971. A 1971 publicity campaign designed by F. William Free promoting National's flight attendants was criticized by the National Organization for Women as being sexist due to the slogan "I'm Cheryl. Fly me.", or similar. Seeing one of these posters in Manchester inspired Eric Stewart of 10cc to write the band's 1976 song "I'm Mandy Fly Me". 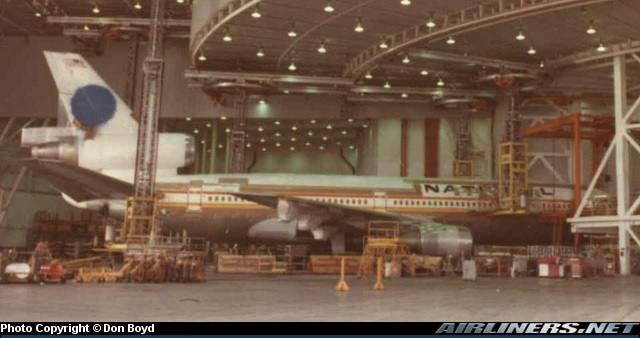 In the late 1970s, several airlines tried to take over National Airlines, who had become a major player in the southern transcontinental and Florida-East Coast airline markets.[29] In 1978, Texas International Airlines (which was led by Frank Lorenzo at that time) acquired 24.6 percent of the shares, but did not succeed in the subsequent tender offer takeover bid. A similar attempt was made by Eastern Air Lines in 1979. At the same time, the shares held by Texas International were sold to Pan American World Airways, who emerged as a white knight and succeeded in accumulating a controlling majority. On January 7, 1980, the acquisition was completed, with Pan Am taking over the National Airlines fleet and route network.