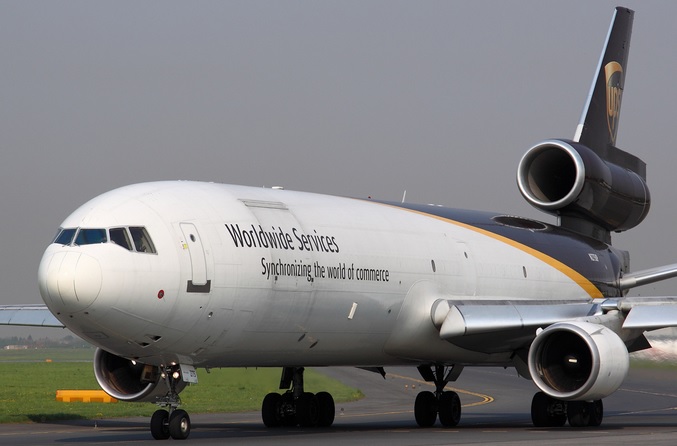 UPS Airlines is an American cargo airline owned by United Parcel Service Inc. (NYSE: UPS). The company is headquartered in Louisville, Kentucky. Its international all-points air hub, Worldport, is based at Louisville International Airport. The pilots are represented by the Independent Pilots Association.

Early years
The origin of transporting packages by air for UPS (then United Parcel Service) dates to 1929; much like the U.S Postal Service, UPS packages were transported as baggage on commercial airline flights.[4] Many packages were shipped by the Ford Trimotors of United Airlines. After Black Tuesday and the beginning of the Great Depression, the air service would be discontinued by the end of 1931. However, the air service would lead to the expansion beyond the West Coast; in 1930, the company moved operations from Oakland to New York City and established operations in other regions across the country as well.

After World War II, UPS (in the process of acquiring common carrier rights for every address in the United States) revisited the idea of shipping packages by air. Starting in 1953, 2-day delivery was offered on coast-to-coast packages; the service was called Blue Label Air. As before, volume was transported via commercial flights. Initially unprofitable, Blue Label Air became popular as its speed created enough demand to maintain a profit.

A UPS DC-8-71F in Miami, Florida
In 1975, UPS started its first international operations as it moved into Canada; the next year, it started service in Germany. As UPS had become a truly international company, the need for its own fleet of aircraft was becoming imminent rather than relying on commercial flights. Additionally, competitor Federal Express, with its own jet fleet, was making inroads on UPS and had become profitable for the first time in 1976. In 1978, the Airline Deregulation Act gave UPS a significant opportunity: the company could now establish its own airline and flying from city to city would require far fewer legislative hurdles, as the federal government now encouraged competition between airlines. In 1980, UPS opened its first major hub, located in Louisville, Kentucky. The location was chosen largely because it is three hours flying distance (by jet) from the majority of the continental United States. In addition, Louisville has relatively mild weather and is at the westernmost point of the Eastern time zone. Also in the early 1980s, the company began acquiring a fleet of jet aircraft recently retired from commercial aircraft duty; it was composed of Douglas DC-8s, Boeing 727-100s, and Boeing 747-100s.

In 1988, UPS Airlines was founded; at the time of its founding, UPS had a route network serving 41 countries connecting the United States to Asia and Europe. During the 1990s, the airline expanded its jet fleet with all-new aircraft. The first of its 75 Boeing 757-200s was delivered starting in 1987, while 32 767-300s were delivered beginning in 1995. In the 1990s, the airline began to expand its network beyond the Louisville hub with facilities in Rockford, Illinois; Philadelphia; Dallas/Fort Worth; Columbia, South Carolina; and Ontario, California.

As the jet fleet flies primarily on weekdays, UPS was eager to find ways for its aircraft to produce income other ways. In the 1990s, eight 727s were converted (at a cost of $2.5 million each) into 727-100QC (QC=Quick Change) freighters that were able to be converted into passenger aircraft for the purpose of charters.

2000 – present
In 2000, the UPS airline fleet saw another major addition, as the first of 90 Airbus A300 freighters entered service; these marked the first non-Boeing/Douglas aircraft in the fleet. In 2001, the airline ended its passenger service, focusing exclusively on freight service. In April 2001, the airline made its first flights to China, six days a week.[6] In 2003, the aircraft saw a change in livery as United Parcel Service officially became UPS and the tail logo (a design seen since 1961) was redesigned.

In September 2002, UPS opened an international all-points air hub called Worldport in Louisville, Ky. An expansion of Worldport was completed in April 2010, with the facility now measuring 5.2 million square feet, with a perimeter of 7.2 miles.

On February 8, 2010 UPS announced the plans to furlough at least 300 pilots in 2010 and 2011, cancelling the agreement reached in 2009 between UPS and the Independent Pilots Association.[7] The remaining pilots not furloughed demonstrated unprecedented unity by not flying overtime while colleagues were laid off. UPS decided to reduce the furlough to 109 pilots. The final pilot furloughed was in August, 2010. UPS decided to recall pilots back to work in December, 2011. The furlough officially ended in May, 2014 when the first pilot furloughed returned to work