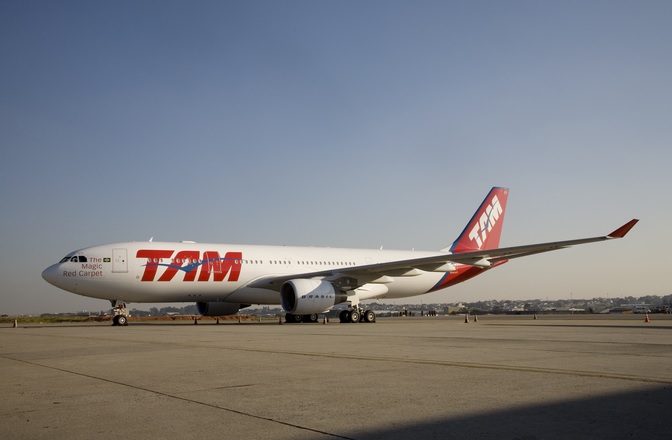 
TAM Airlines (Portuguese: TAM Linhas Aéreas) is the Brazilian brand of LATAM Airlines Group. The merger of TAM with LAN Airlines was completed on June 22, 2012. The company is currently the largest Brazilian airline by market share and fleet size, though it is not a flag carrier.

Before the takeover, TAM was Brazil's and Latin America's largest airline. Its headquarters are in São Paulo, operating scheduled services to destinations within Brazil, as well as international flights to Europe and other parts of North and South America. Shares in the company were traded on the São Paulo Exchange (BM&F Bovespa) and New York Stock Exchange as "TAM".[9] Prior to the merger with LAN, the company closed its capital, transferring its shares to Latam Airlines Group.

According to the National Civil Aviation Agency of Brazil (ANAC), between January and December 2012 TAM had 40.79% of the domestic and 89.44% of the international market shares in terms of passengers per kilometre flown.[10] Starting September 2010 statistics refer to the totality of TAM Group, comprising TAM Airlines and TAM (Paraguay)

The airline withdrew from the Star Alliance and joined Oneworld effective March 31, 2014.

TAM – Transportes Aéreos Regionais (KK)
On November 11, 1975, the Government of Brazil created the Brazilian Integrated System of Regional Air Transportation and divided the country in five different regions, for which five newly created regional airlines received a concession to operate air services. Founded by Rolim Adolfo Amaro[11] TAM – Transportes Aéreos Regionais S/A was the third of those regional airlines to be made operational. Its services started on July 12, 1976, and its operational area comprised parts of the Southeast and Central West regions of Brazil, specifically the states of Mato Grosso do Sul, and parts of Mato Grosso, and São Paulo plus the possibility of serving the cities of Cuiabá, Rio de Janeiro, Londrina, Maringá and Brasília when linking them to its area of concession.[12]

TAM – Linhas Aéreas Regionais was formed as a joint-venture between TAM – Táxi Aéreo Marília and VASP, the latter of which was then a state-owned airline. The airline received the IATA code KK[13] on October 13, 1999. The new airline flew Embraer EMB 110 Bandeirantes at first, but these proved grossly inadequate for the task at hand, and even at full capacity needed to be subsidized by the government in order to be profitable.

TAM went on to purchase three used Fokker F27 turboprops, which were subsequently refurbished by Fokker in the Netherlands. In order to obtain the import authorization for the aircraft, a deal was struck with the government in which TAM was forced to maintain 3 Bandeirantes for every F27, as well as removing 5 seats from each one, bringing the F27's capacity down to 40 passengers. A fourth F27, previously owned by Air New Zealand, was added to the TAM fleet in 1981. By 1983, TAM had acquired 10 F27s. By 1981, TAM had flown one million passengers, and two million by 1984.

TAM (KK) joint operations with TAM (JJ)[edit]
Main article: Brasil Central Linhas Aéreas
In August 1986, the company, under financial stress, went public and began floating stock in the market. The same year, TAM – Transportes Aéreos Regionais (KK) acquired another regional airline, VOTEC, which operated in areas of northern and central Brazil. VOTEC was then renamed Brasil Central Linhas Aéreas. TAM and Brasil Central were both regional airlines and operated in different designated areas. They however operated as a consortium with integrated networks and fleet, with the most notable differences being the flight number IATA codes (whereas TAM had the IATA code KK, Brasil Central operated with the code JJ inherited from VOTEC), the different color schemes of the aircraft, and their designated areas of operation. In 1988, TAM flew its 3 millionth passenger.

On May 15, 1990, the Brazilian Government lifted restrictions on operational areas of regional airlines allowing them to fly anywhere in Brazil. As a consequence, Brasil Central was renamed TAM – Transportes Aéreos Meridionais, acquired the same color scheme of TAM (KK) but maintained the IATA code JJ.

In 2000 TAM (KK) was merged into TAM (JJ) and TAM (JJ) was renamed TAM Transportes Aéreos. The code JJ was maintained and the code KK was released back to IATA. It is now used by Atlasjet.

Despite TAM's success in the market, it was evident the airline would not last long when competing against airlines such as Varig and VASP, both of which already possessed Boeing 737s in their fleet. Amaro then tried to buy VASP, which was about to be privatized, and called the project "Revolution". Having lost the bid, he opted for slower growth with a gradual addition of new aircraft, re-dubbed "Evolution".

Consolidation of Services[edit]
Main article: Helisul Linhas Aéreas
Main article: Pantanal Linhas Aéreas
On September 15, 1989, TAM arranged for the acquisition of two Fokker 100 jets, which had originally been ordered by the now-bankrupt Pan American World Airways. Like the F27s before them, TAM did not actually purchase these aircraft, but used Amaro's credibility to arrange for a third-party asset management company, Guinness Peat Aviation to purchase them and subsequently lease them back to TAM. Two more were added in 1991. In 1992, TAM carried its eight millionth passenger. By 1993, through the use of the Fokker 100 fleet, which now numbered at 14, TAM was serving 56 cities in Brazil.

In 1996 TAM bought another airline, Helisul Linhas Aéreas, which used the trade name of TAM. In 1997, TAM ordered its first large jets; the airline ordered 45 planes from Airbus, including 10 A330s, 4 A319s, and 34 A320s. In 1997, the Airbuses began to be delivered and the airline flew its first international service, from São Paulo to Miami International Airport.

In 2009 TAM decided to replace its Passenger Service System provided by Sabre, known as Sabresonic, with the Altéa platform from Amadeus.[16] The migration to Altéa was completed in the first quarter of 2010.[17]

On December 21, 2009, TAM Airlines purchased Pantanal Linhas Aéreas. At that time TAM decided to maintain Pantanal as a separate airline within the TAM Group integrated into the network of TAM.[22] Starting August 1, 2011 Pantanal operated flights on behalf of TAM, all with origin and destination at São-Paulo-Congonhas Airport. On March 26, 2013 Brazilian authorities approved the incorporation of all Pantanal assets by TAM and Pantanal ceased to exist.[23] The incorporation process was completed on August 23, 2013.[24]

In January 2013, the Jet Airliner Crash Data Evaluation Centre (JACDEC) determined that TAM Airlines had the second worst safety record in the world. The ratings take into account the number and deadliness of the hull losses (destroyed airplanes) they have suffered in the past 30 years, how they have fared more recently, and how many flights they have flown without incident. The results do not take into account the cause of the hull losses, or whether the airline is at fault, so they are not a perfect measure of how safely an airline behaves.[25]

A TAM Boeing 777-300ER taxiing at Frankfurt Airport.
On August 13, 2010, TAM signed a non-binding agreement with Chilean airline LAN Airlines to merge and create LATAM Airlines Group.[26] This was changed into a binding agreement on January 19, 2011.[27] Latam agreement was approved with 11 restrictions by Chilean authorities on September 21, 2011. These included transferring 4 slots at São Paulo-Guarulhos to competitors interested in operating flights to Santiago de Chile, renouncing membership to either Oneworld or Star Alliance, restricting increase capacity on flights between Brazil and Chile, and opening code-share possibilities and fidelity program membership to interested competitors.[28] On December 14, 2011, Brazilian authorities approved the agreement imposing similar restrictions as Chilean authorities. By August 2012 LATAM made a decision in favor of Oneworld and frequencies between São Paulo and Santiago de Chile were reduced: TAM had two pairs of slots while LAN had four. LAN ceded two pairs to competitors interested in using them which later was known to be Sky Airline.[29] The merger was completed on June 22, 2012.[5]

TAM plane at Londrina airport
In 1994 TAM Airlines established a small subsidiary airline in Paraguay called ARPA - Aerolíneas Paraguayas with a fleet consisting mostly of Cessna 208 Caravan aircraft, formerly operated by TAM. On September 1, 1996, TAM via ARPA, purchased 80% of the shares of the former state-owned LAP – Líneas Aéreas Paraguayas and merged it with ARPA. The new airline was named TAM – Transportes Aéreos del Mercosur and maintained the IATA code of LAP, PZ. Today TAM owns 94.98% and the Paraguayan government 5.02% of the shares.

In 2008, following a branding strategy, the name TAM Mercosur was dropped and the airline adopted an identical corporate identity of TAM Airlines. However, its corporate structure remains the same.[30] This airline is today informally known as TAM Paraguay, and uses the IATA code PZ.

TAM Airbus A320 in the former livery
On June 16, 2005, TAM purchased 20 additional Airbus A320 family aircraft (including the A319, A320 and A321), with an additional 20 options. These are expected to be delivered between late 2007 and 2010, adding to the already scheduled delivery of 6 A320s between 2006 and 2008. At the same time, the company signed a memorandum of understanding with Airbus stating its intent to buy 10 of the new Airbus A350-900 (plus 5 options), with deliveries due to commence at the end of 2014. These are expected to replace the A330 on the Paris and Miami routes as they become available.[citation needed]

TAM has signed a firm contract with Airbus to acquire 37 additional aircraft. The order comprises twelve A319s, 16 A320s, three A321s and three A330s and includes twelve unspecified extra options. This would bring the number of aircraft in TAM's fleet acquired directly from Airbus to 115 aircraft.[33] The commitments are separate from deals in earlier years for 29 firm-ordered A320s and 20 options. The deliveries are to be concluded by 2010.

In 2013, TAM announced the phase out of the 3 Boeing 767 it operates, but it later changed plans and decided to keep the aircraft and bring 6 more newer aircraft from LAN Airlines. They will replace older A330-200. TAM will also receive the first aircraft of the A320 family with Sharklets in April 2013. TAM will also receive 10 more Airbus A321 in the ends in March 2015. Plane will be ferried from Stockholm to Brasilia at the same time.[citation needed]

Fleet maintenance is partially conducted at the technology center at São Carlos Airport.[34][35]

Actual points accrual vary according to the fare basis of the ticket. Figures in the table are for full fares.

To achieve BLACK status, only points flown with TAM Airlines, LAN Airlines and their subsidiaries are taken into account.