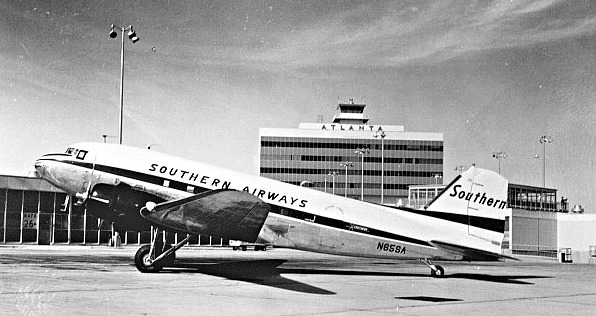 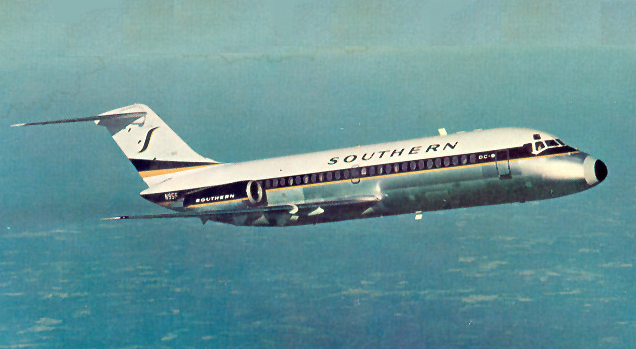 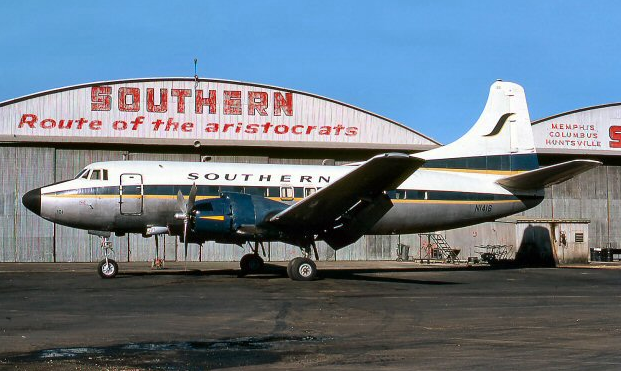 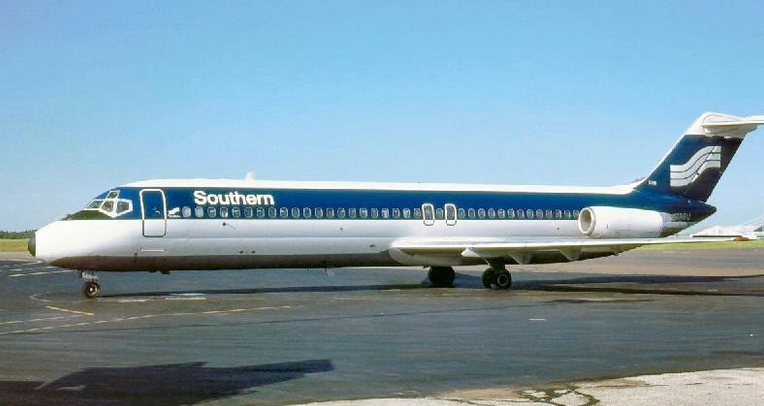 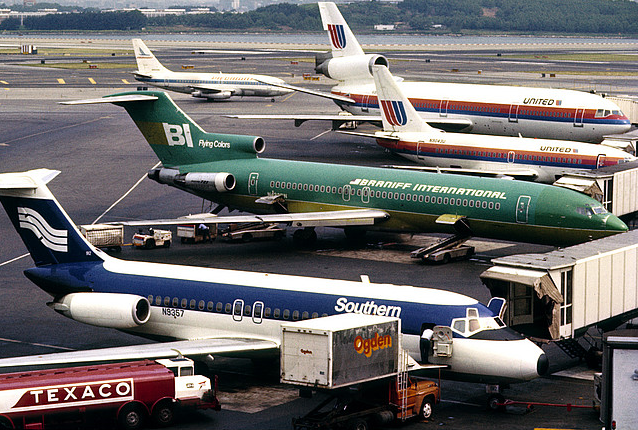 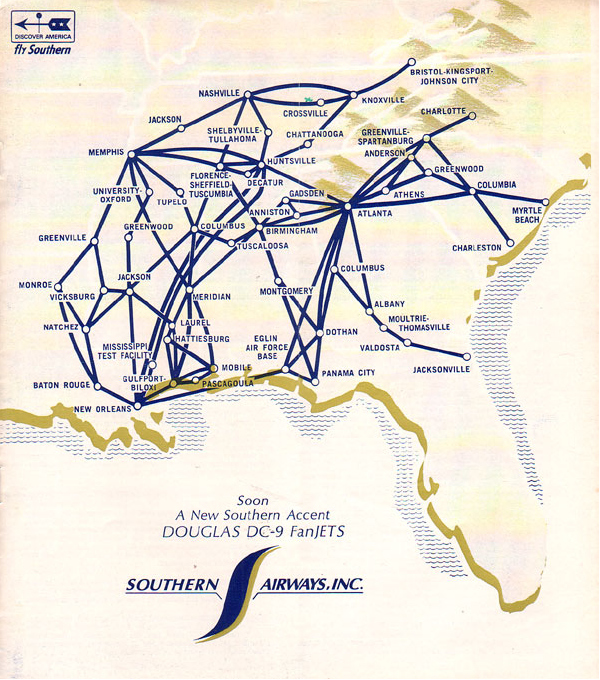 Southern Airways (IATA: SO, ICAO: SOU, Call sign: Southern) was a regional airline operating in the United States from its founding by Frank Hulse in 1949 until 1979 when it merged with North Central Airlines to become Republic Airlines, which on October 1, 1986, became part of Northwest Airlines, which in 2008 became a part of Delta Air Lines. Southern was headquartered at William B. Hartsfield Airport, near Atlanta.

[edit] Aircraft and routes   Southern Airways was the Local Service airline covering the south-central U.S. In 1955 routes spanned from Memphis south to New Orleans and east to Charlotte and Jacksonville. By 1968 Southern's route system extended from its most northerly stop at the Tri-Cities regional airport in Tennessee south to New Orleans and Jacksonville. At the west edge of Southern's route system were Baton Rouge and Monroe, Louisiana. Routes extended east to the Atlantic Ocean at Myrtle Beach and Charleston.   Like most other Local Service airlines Southern flew only Douglas DC-3s for its first few years; it began acquiring 40-passenger secondhand Martin 4-0-4 piston airliners from Eastern Air Lines in 1961 and its last DC-3 was retired in 1967. The first 65-75 passenger Douglas DC-9-10s arrived in 1967 and 85-95 passenger DC-9-30s in 1969. Some of these were bought new from the manufacturer. Unlike other local service airlines Southern did not use turboprop aircraft in the 1960s, but by the time of the North Central merger Southern had replaced its Martins with a small fleet of 19-passenger Fairchild Metro II turboprop airliners.   [edit] 1970s

Revenue passenger traffic, in millions of passenger-miles (scheduled flights only)

Douglas DC-9-15 of Southern Airways at Atlanta, Georgia, in October 1973 By 1971 Southern was operating flights into New York City and Chicago and as far south as Orlando and Miami. Because U.S. government regulation of airline routes prohibited Southern from operating flights from New York or Washington, D.C. nonstop to Atlanta, Southern had multiple daily flights from New York and Washington nonstop to Columbus, Georgia, then on to Dothan, Alabama; Mobile, Alabama; Panama City, Florida, Eglin Air Force Base, Florida; and/or Gulfport/Biloxi, Mississippi. Southern remained a regional airline in character with many flights scheduled with up to five or six stops.   With increasing acquisitions of DC-9 jet aircraft, many routes once served with propeller-driven aircraft were served with jets. Jet flights linked small cities to hubs at Atlanta and Memphis, sometimes with multiple stops. Some examples include:  Columbus, Georgia to Washington, DC. and New York/Newark.  Meridian, Mississippi to Birmingham, Alabama; Columbus, Mississippi; and Laurel/Hattiesburg, Mississippi.  Tuscaloosa, Alabama to Atlanta, Georgia and Columbus, Mississippi.  Muscle Shoals/Florence, Alabama to Memphis, Tennessee and Huntsville/Decatur, Alabama.  Greenville, Mississippi to Memphis, Tennessee and Monroe, Louisiana.  Columbia, South Carolina to Greenville/Spartanburg and Charleston, South Carolina.  Albany, Georgia to Atlanta, Georgia; Valdosta, Georgia; Dothan, Alabama; and Columbus, Georgia.   One of the most extreme examples of a single flight number, same aircraft, with multiple stops, was the routing flown by a DC9-14 originating in Miami, then on to Orlando, Tallahassee, Panama City, Eglin AFB, Mobile, Gulfport, New Orleans, Birmingham, Atlanta, Huntsville, Memphis, St Louis and terminating in Chicago (Midway Airport), a total flight time start to finish of 14hr 32min.   By the mid-1970s Southern's route system had expanded to St. Louis, Detroit, Ft. Lauderdale and Grand Cayman, Southern's only international destination.   Southern Airways billed itself as the "Route of the Aristocrats."  and used the slogan "Nobody's Second Class on Southern" in its television commercials. They were famous for their promotional shot glasses: for a time, differently designed shot glasses were issued each year. Original Southern shot glasses are valued by collectors of airline memorabilia.   During the early 1970s, before strict airport security was implemented across the United States, several airlines experienced hijacking incidents. One such incident occurred on November 10, 1972, when Southern Airways Flight 49, a Southern Airways DC-9 en route from Memphis to Miami was hijacked during a stopover in Birmingham, Alabama. The three hijackers boarded the plane in Birmingham armed with handguns and hand grenades. At gunpoint, the hijackers took the airplane, the plane’s crew of four, and 27 passengers to nine American cities, Toronto, and eventually to Havana, Cuba. During the long flight the hijackers threatened to crash the plane into the Oak Ridge, Tennessee, nuclear facilities, insisted on talking with President Richard Nixon, and demanded a ransom of $10 million. Southern Airways was only able to come up with $2 million. Eventually the pilot talked the hijackers into settling for the $2 million when the plane landed in Chattanooga for refueling. Upon landing in Havana the Cuban authorities arrested the hijackers and, after a brief delay, sent the plane, passengers, and crew back to the United States. The hijackers and $2 million stayed in Cuba.   Southern Airways accounted for the $2 million by debiting it to an account entitled “Hijacking Payment.” This account was reported as a type of receivable under “other assets” on Southern’s balance sheet. The company maintained that it would be able to collect the cash from the Cuban government and that, therefore, a receivable existed. Southern Airways was repaid $2 million by the Cuban government, which was attempting to improve relations with the United States.[4]   [edit] Difficulties and merger

By the late 1970s, Southern Airways began to experience difficulties. Two fatal accidents (See Southern Airways Flight 932 November 14, 1970 and Southern Airways Flight 242 April 4, 1977) blighted the airline's otherwise excellent safety record. Improved highways and an increasing willingness among passengers to drive to airports farther away for more convenient flights made many of Southern's routes obsolete. With dramatic increases in the price of jet fuel in the 1970s, many of Southern's routes were no longer cost-effective.   On July 1, 1979, Southern merged with North Central Airlines to form Republic Airlines and the "Route of the Aristocrats" came to an end.