Frustrated by the limited extent of existing air service, Ralph Atkin, a St. George, Utah lawyer, purchased Dixie Airlines to shuttle businessmen to Salt Lake City in 1972. After early struggles, SkyWest began steady expansion across the Western US. It became the eleventh largest regional carrier in 1984 when it acquired Sun Aire Lines of Palm Springs, California, and had its initial public offering in 1986. 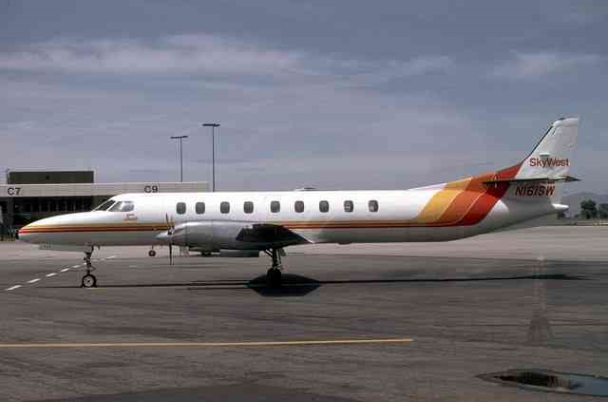 In 1985, SkyWest began codesharing as Western Express, a feeder service for Western Airlines at its Salt Lake City hub, later acquired by Delta. In 1995, SkyWest began operating flights for Continental Airlines out of LAX. The relationship was discontinued two years later when SkyWest began flying for United Airlines. SkyWest's United Express flights out of SFO, LAX and DEN became its largest operation by the late 1990s. A partnership with Continental was revived in 2003 out of George Bush Intercontinental Airport, but was discontinued in June 2005. On August 15, 2005, Delta announced that it was selling Atlantic Southeast Airlines to the newly incorporated SkyWest, Inc. for $425 million in cash. The acquisition was completed on September 8, 2005.

On August 4, 2010, SkyWest Inc. announced that it planned to acquire ExpressJet Airlines and merge it with SkyWest subsidiary Atlantic Southeast Airlines in a deal reported to have a value of $133 million. The purchase aligned the largest commuter operations of United Airlines and Continental Airlines, who were in a merger process, and was approved on September 13, 2010, by the Federal Trade Commission.

In February 2011, Alaska Airlines announced SkyWest would be replacing six Horizon Air flights on the West Coast beginning May 14. The flights were scheduled to based out of Seattle and Portland, and fly to several California cities including Fresno, Burbank, Santa Barbara and Ontario. Alaska Airlines has similar agreements with PenAir for Alaskan flights and Horizon Air for flights in the lower 48.[16]

In June 2011, AirTran Airways announced that it would end codesharing and partnership with SkyWest effective September 2011. Two months later, SkyWest announced a codesharing agreement with US Airways, effective early to mid-2012, to operate CRJ200 aircraft from US Airways' hub in Phoenix, Ariz.

In September 2012, SkyWest announced that it would begin a capacity purchase agreement with American Airlines for 12 CRJ200 aircraft from American's hub in Los Angeles, California, effective November 15, 2012.