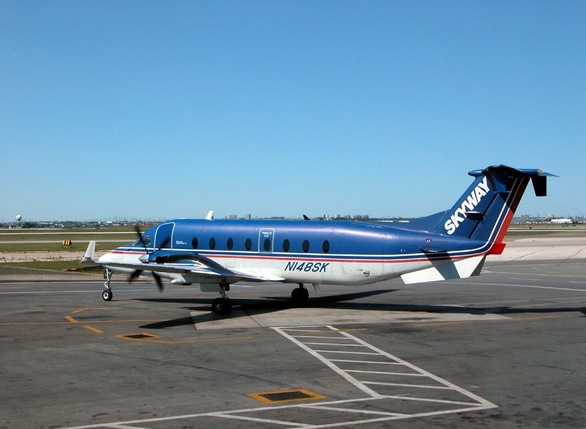 In 1999, Skyway became the world launch customer for the Fairchild Dornier 328JET aircraft, a 32-seat jet. It ultimately acquired 12 328JETs. The 328JETs allowed Skyway to provide new service to cities as far as Hartford, New York City, Washington, D.C., and Raleigh-Durham, and to provide more comfortable passenger accommodations on routes previously served by the Beechcraft 1900. Skyway planned to transition to an all-jet fleet by obtaining additional 328JET aircraft, purchasing German manufacturer Fairchild Dornier's planned 44-seat version, known as the 428JET, and phasing out the Beechcraft 1900.

In 2002, Dornier, an aviation pioneer dating back to the 1930s, became insolvent. Production of the 328JET stopped. This interrupted Skyway's plans to further expand its jet fleet and replace the Beechcraft 1900. AvCraft Aviation, a Virginia-based parts supplier for the 328 turboprop and the 328JET, purchased the production rights for the 328JET from Fairchild Dornier's receivers, and planned to re-establish production of the type. Then AvCraft went bankrupt. This made further growth of the 328JET fleet effectively impossible.

The other regional jets built by Canadair and Embraer had substantial order backlogs, and the training, maintenance and inventory costs of running a small airline with three different aircraft types made another jet purchase financially impractical. Without having an available replacement aircraft, Skyway began to draw down its Beechcraft 1900 fleet, planning to eventually eliminate that fleet.

In March, 2003, Midwest Express Airlines reincorporated and changed its name to Midwest Airlines. Astral Aviation, Inc., d/b/a Skyway Airlines also reincorporated and changed its name, to Skyway Airlines, Inc., d/b/a Midwest Connect. New logos were designed for both airlines' aircraft and uniforms, and the connection between Midwest Airlines and Midwest Connect was made more obvious for marketing purposes.

In 2006, Midwest Airlines announced that it would obtain additional regional feed from SkyWest Airlines, an independently owned airline based in St. George, Utah which operated Canadair regional jets. The SkyWest aircraft would also bear the name "Midwest Connect." Midwest announced that it would operate the SkyWest and Skyway operations side-by-side.

Following the Northwest Airlines/TPG purchase, Midwest announced on January 16, 2008 that it would terminate all Skyway Airlines flight operations and transfer the remaining Midwest Connect flying to SkyWest. Midwest also discussed a potential contract with Great Lakes Airlines to provide code-share feed to a the Essential Air Service cities they would serve from Milwaukee. The Skyway subsidiary would remain as a ramp services and catering company for Midwest Airlines and for certain (SkyWest) Midwest Connect operations.

Midwest, already in a financially weakened condition following the September 11, 2001 attacks and the aforementioned takeover battle, suffered another severe financial blow as a result of the 2008 fuel price spike. Midwest's fleet of MD-80 airliners had been well suited to its markets and Midwest's high-service business model during the 1990s, but by 2008 it was no longer fuel efficient as compared with newer aircraft designs. Midwest terminated the leases on those aircraft and returned them to their lessors. Shortly thereafter, as the result of a failed lease renegotiation with Boeing, Midwest also lost the leases on 16 of its 25 newer Boeing 717 aircraft, leaving the airline with only 9 of the 38 aircraft with which it had started the year.

On September 3, 2008, Skyway's parent Midwest Airlines announced an agreement to transfer most of its mainline flight operations to another independent regional airline, Republic Airways. Republic agreed to operate 12 76-seat Embraer 170 jets under the Midwest Connect name and provide Midwest $20 million in financing. As a result, Midwest furloughed 269 of its 399 pilots and total employee cuts for the year were approximately 1,850[citation needed].

On February 2, 2009, Midwest Air Group CEO Tim Hoeksema announced in an internal corporate memorandum that all remaining Skyway functions will be assumed by Midwest Airlines, and that Skyway will cease to exist as a separate entity. No end date for Skyway operations had been announced. It remains unclear if Skyway had been fully integrated into Midwest prior to Republic Airways' acquisition of Midwest from TPG. 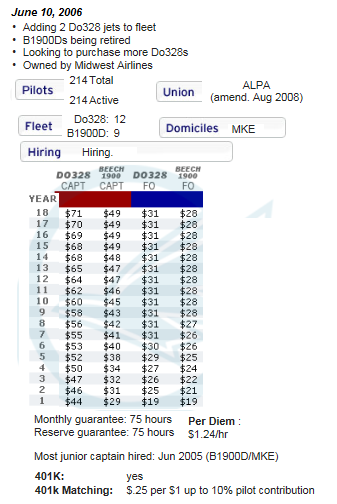