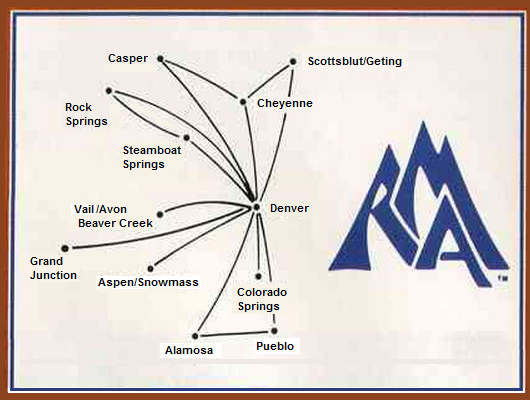 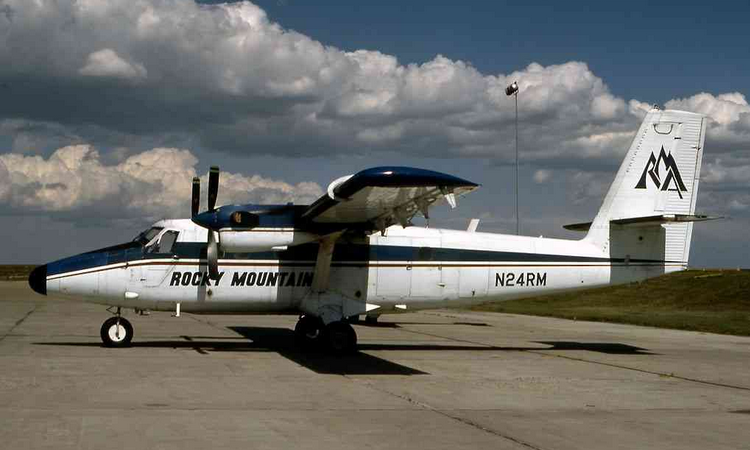 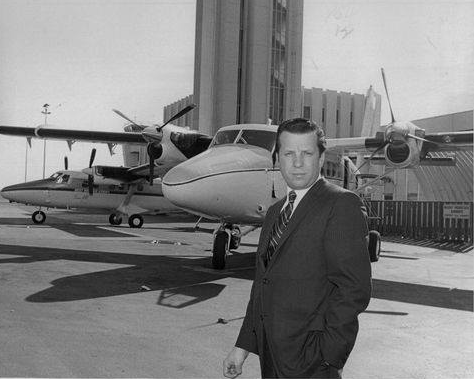 The airline flew from Denver's Stapleton International Airport to a variety of destinations in Colorado. The airline operated out of the old commuter terminal in Concourse A at Stapleton.
The airline was founded as Vail Airways in 1963 by Gordon Autry. The airline adopted "Rocky Mountain Airways" in 1968, shortly after service to Aspen was introduced.

Both the DHC-6 Twin Otter and the DHC-7 Dash 7 featured short takeoff and landing (STOL) performance. This enabled Rocky Mountain Airways to serve destinations that otherwise would not have received scheduled passenger air service. One example was the Avon STOLport located in close proximity to the Vail ski resort which was served with the Dash 7. Another example was the Steamboat Springs Airport which was also served with the Dash 7. With a relatively short runway length of 4,452 feet and an airfield elevation of 6,882 feet, the Dash 7 was well suited for passenger operations from this small airport located near the Steamboat Springs ski resort. Rocky Mountain Airways also operated Twin Otter flights from Lake County Airport in Leadville, Colorado. With an airfield elevation of 9,927 feet, Leadville is the location of the highest airport ever to have received scheduled passenger air service in the U.S. The Avon STOLport, which was a private airstrip controlled by the airline, no longer exists. Airline service to Vail is now provided via the Eagle County Airport which is located over 35 miles to the west via Interstate 70. Steamboat Springs is now served by several airlines from the Yampa Valley Airport which is located over 25 miles to the west via U.S. 40. Leadville no longer has airline service.

Another primary route served by the airline was between Aspen and Denver. RMA flew the Twin Otter between the two destinations and then introduced Dash 7 service. The major competitor at the time in Aspen was Aspen Airways which flew Convair 440 piston engine prop aircraft which were subsequently replaced with Convair 580 turboprops. Aspen Airways then began operating new British Aerospace BAe 146-100 jet aircraft on the route. Rocky Mountain and Aspen Airways competed for many years from Aspen.

Rocky Mountain Airways also served as a Continental Express air carrier at one point in order to provide passenger feed at this major airline's hub operation in Denver at the time. Twin Otter and Dash 7 aircraft were painted in Continental's distinctive red, gold and white livery with "Continental Express" titles. 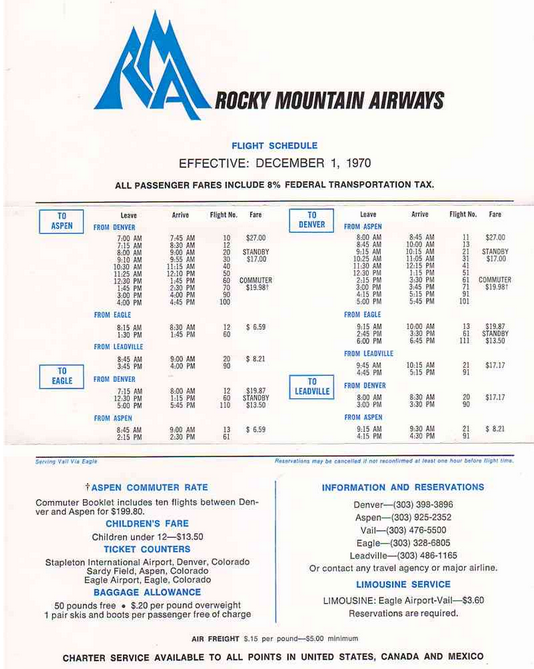 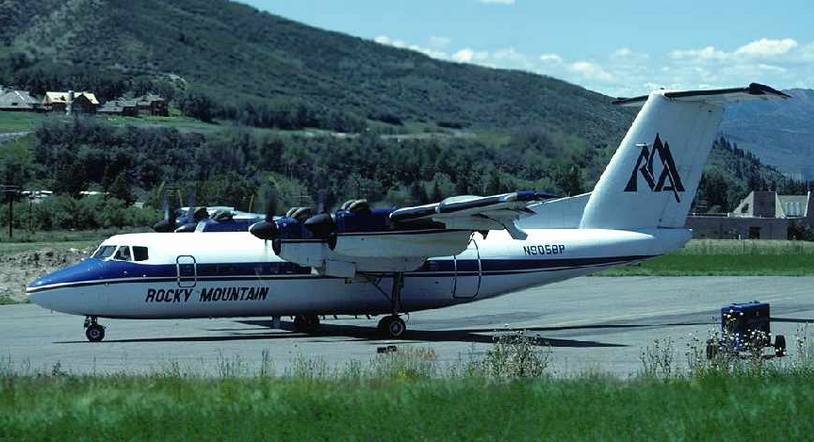 Development started in 1972 and the prototype first flew on March 27, 1975. Testing went smoothly, and the first delivery took place to Rocky Mountain Airways on February 3, 1978. The Dash 7 enabled Rocky Mountain Airways to operate scheduled passenger air service from Denver into the Avon STOLport in Colorado which was controlled by the airline. The Avon STOLport was located in a mountain valley in close proximity to the Vail ski resort. Another close-in ski resort airfield served by Rocky Mountain Airways with Dash 7 flights from Denver was Steamboat Springs Airport in Colorado. With a relatively short runway length of 4,452 feet and an airfield elevation of 6,882 feet, the Dash 7 was well suited for operations from this airport located in the Rocky Mountains.

Avon Airport was run by a commuter airline, Rocky Mountain Airways. It was a STOLport (Short Takeoff & Landing), surrounded by mountains. The airline pilots actually needed a specific type rating to fly into Avon Airport. Jon Silver (former Rocky Mountain Airways Captain) recalled, “Avon Airport...The glideslope was 8 degrees, and was the steepest glideslope in the world. It was a TALAR (Tactical Landing Aid Radio) and was used originally used during the Vietnam war.” According to former Rocky Mountain Airways pilot Lou Popolizio, the 11/2/79 Avon MLS Rwy 28 Approach plate indicated Avon Airport was located at an 7,538' elevation. Rick reported, “The MLS approach had a Decision Height of 8,644' MSL. The distance from the final approach fix (SCALI intersection) to the end of the Runway 28 was 8.7 NM & the glideslope intercept began at 15,000' MSL. You had to descend 7,468' in 8.7 NM which is an 8 degree glideslope. This descent amounted to an altitude loss of 858' / NM. We typically had an approach speed of 77 KIAS which is approximately 90 KTAS. We typically saw 1,000-1,400 FPM descents on the glideslope.” Tim Fitz-Gerlad recalled, “I use to live in Avon, Colorado from 1972-92. This airport was actually called the Avon STOLport. The airplane that was frequently used by Rocky Mountain Airways was the DeHavilland DHC-7 (Dash 7). The contract for keeping the airport cleared was under the Nottingham family (Randy) and they installed an underground heating system to actually help heat the ground and make cleaning/clearing the runway easier & at times also completely unnecessary. Rocky Mountain Airways had a local nickname of Rocky Mountain Scareways and the descents into this airport occasionally produced a zero-G sensation due to the steep descents (I have flown into that airport at least 4 times & it was better than any roller coaster ride I’ve ever been on with steep banks & rapid descents). Missed approaches were not a big deal because the valley descends & widens very quickly 'down valley' to the west.”