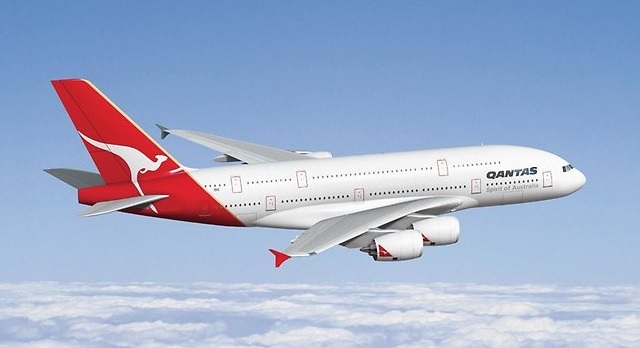 Qantas Airways Limited  is the flag carrier airline of Australia and its largest airline by fleet size, international flights and international destinations.[4] It is the second oldest in the world,[5] having been founded in November 1920; it began international passenger flights in May 1935. The Qantas name comes from "QANTAS", an acronym for its original name, "Queensland and Northern Territory Aerial Services", and it is nicknamed "The Flying Kangaroo".

The airline is based in the Sydney suburb of Mascot with its main hub at Sydney Airport. Qantas has a 65% share of the Australian domestic market and carries 18.7% of all passengers travelling in and out of Australia.[6][7] Its subsidiaries QantasLink and Jetconnect provide services within Australia and to New Zealand respectively, flying under the Qantas brand. Qantas also own the low-cost airline Jetstar, which operates both domestic and international services, and hold stakes in a number of its sister airlines.

Qantas operates a mixed fleet of Airbus and Boeing aircraft. It was the only airline in the world to have a fleet made up solely of Boeing 747s during the 1980s, and in 2008 began to replace the type with the Airbus A380 as part of its fleet renewal.

Qantas is a founding member of the Oneworld airline alliance, together with American Airlines, British Airways, Cathay Pacific and the defunct Canadian Airlines.

Qantas Empire Airways International seaplane flights arriving at Rose Bay (c.1939)
Qantas was founded in Winton, Queensland on 16 November 1920 as Queensland and Northern Territory Aerial Services Limited.[8] The airline's first aircraft was an Avro 504K. The airline flew internationally from May 1935, when it commenced service from Darwin, Northern Territory to Singapore. In June 1959 Qantas entered the jet age when the first Boeing 707–138 was delivered.[9]

Qantas Boeing 747-400 on final approach to 27L at London Heathrow Airport, 2004
The key trends for the Qantas Group (Qantas Airways Ltd and Controlled Entities), which includes Jetstar and Qantas Cargo, are shown below (as at year ending 30 June):

Qantas Building A
Qantas' headquarters are located at the Qantas Centre in the Mascot suburb of the City of Botany Bay, Sydney, New South Wales.[2]

In 1920 Queensland and Northern Territory Aerial Services Ltd had its headquarters in Winton, Queensland. In 1921 the head office moved to Longreach, Queensland. In 1930 the head office moved to Brisbane. In 1957 a head office, Qantas House, opened along Hunter Street in Sydney.[16] In the 1970s a new A$50 million headquarters, consisting of twin skyscrapers, was being built in Sydney and expected to take one city block. The first and largest tower had an expected completion time in 1973.[17]

Qantas has also bought and donated some Aboriginal art. In 1993, the airline bought a painting — Honey Ant and Grasshopper Dreaming — from the Central Australian desert region. As of 2007, this painting is on permanent loan to Yiribana at the Art Gallery of New South Wales. In 1996, Qantas donated five extra bark paintings to the gallery. Qantas has also sponsored and supported Aboriginal artists in the past.[18]

A Qantas Boeing 747-400 in special F1 Australian Grand Prix Livery at Los Angeles International Airport.
An early television campaign, starting in 1967 and running for several decades, was aimed at American audiences; it featured a live koala, voiced by Howard Morris, who complained that too many tourists were coming to Australia and concluded "I hate Qantas."[19] The koala ads have been ranked among the greatest commercials of all time.[20] A long-running advertising campaign features renditions by children's choirs of Peter Allen's "I Still Call Australia Home", at various famous landmarks in Australia and foreign locations such as Venice.[21]

Fundamental structural change[edit]
The Australian Commonwealth Air Navigation Act caps foreign ownership of Qantas at 49 percent if it wants to use Australian traffic rights on international routes. The Qantas Sale Act, under which the airline was privatised, also limits foreign ownership of Qantas to 49 percent. Foreign airlines are subject to further restrictions under the Qantas Sale Act, which stipulates a 35-percent limit for all foreign airline shareholdings combined. In addition, a single foreign entity can hold no more than 25 percent of the airline's shares.[28]

In August 2011 the company announced that, due to financial losses and a decline in market share, major structural changes would be made. Up to 1,000 jobs would be lost in Australia, and a new Asia-based premium airline would be set up, operating under a different name. It would also launch a budget airline, called Jetstar Japan, in partnership with Japan Airlines and Mitsubishi Corporation. The change become necessary because of losses in the airline's international operations, due to airlines such as Emirates and Singapore Airlines becoming more competitive and because of the deregulation of Australian international routes during the mid-to-late 1980s.[29] Included in the changes were the cessation of services to London via Hong Kong and Bangkok; Qantas will still operate to these cities, but with onward flights to London via its Oneworld partner British Airways under a code-share service.[30]

The first daylight arrival of a Qantas Airbus A380 at Dubai International Airport on 1 April 2013 is greeted with a water cannon salute.
Qantas is attempting to turn around its international operations, which lost about A$200 million ($209 million) for the year ending June 2011. Therefore, on 26 March 2012, Qantas announced it would set up Jetstar Hong Kong with China Eastern Airlines Corporation, which will begin flights in 2013. No budget carrier has a hub at Hong Kong Airport, which had 54 million passengers in 2011.[31]

Due to high fuel prices, intense competition and industrial disputes, Qantas reported a A$245 million full-year loss to the end of June 2012, which was its first loss since Qantas was fully privatised 17 years previously, in 1995, and led to the airline cancelling its order of 35 new Boeing 787 Dreamliner aircraft, to reduce its spending.[32] In focusing on core business, Qantas also divested itself of its 50% holding of StarTrack, Australia's largest road freight company, in part for acquiring full interest in Australian Air Express.[33][34]

Qantas and Emirates began their historic alliance on 31 March 2013, in which their combined carriers offer 98 flights per week[35] to Dubai, that saw bookings up six-fold.[36] To accommodate Muslim sensitivities, the airline has banned pork from all flights bound to/from Europe,[37] which provoked a backlash on social media.[38] In September, following the announcement the carrier expects an A$250 million (US$220 million) net loss for the half-year period that ends on 31 December and the implementation of cost-cutting measures that will see the cut of 1,000 jobs within a year,[39] S&P downgraded Qantas credit from BBB- (the lowest investment grade) to BB+,[40] which may imply a rise in borrowing costs and a limitation in the investment potential.[41][42] Moody's applied a similar downgrading a month later.[43]

New uniform[edit]
Paris-based Australian designer Martin Grant is responsible for the new Qantas airline staff uniforms that were publicly unveiled on 16 April 2013. These were to replace the previous uniforms, dubbed colloquially as "Morrisey" by staff after the designer, Peter Morrissey. Qantas ambassador and model Miranda Kerr assisted with the launch of the new outfits for which the colours of navy blue, red and fuchsia pink are combined. Qantas chief executive Alan Joyce stated that the new design "speaks of Australian style on the global stage" at the launch event that involved Qantas employees modelling the uniforms. Grant consulted with Qantas staff members over the course of one year to finalise the 35 styles that were eventually created.[49] Not all employees were happy with the new uniform, however, with one flight attendant being quoted as saying "The uniforms are really tight and they are simply not practical for the very physical job we have to do."[50]

Qantas operates flightseeing charters to Antarctica on behalf of Croydon Travel. It first flew Antarctic flightseeing trips in 1977.[51] They were suspended for a number of years due to the crash of Air New Zealand Flight 901 on Mount Erebus in 1979. Qantas restarted the flights in 1994.[52] Although these flights do not touch down, they require specific polar operations and crew training due to factors like sector whiteout, which contributed to the 1979 Air New Zealand disaster.

With new non-stop service from Sydney Airport to Dallas/Fort Worth International Airport aboard the Airbus A380 starting on 29 September 2014, Qantas now operates the world's longest passenger flight on the world's largest passenger aircraft 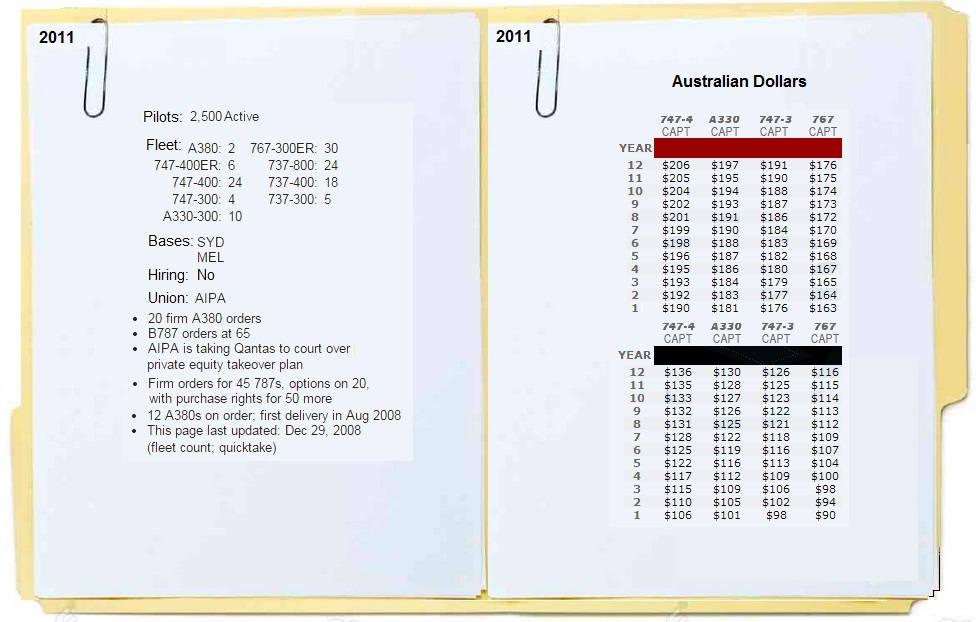