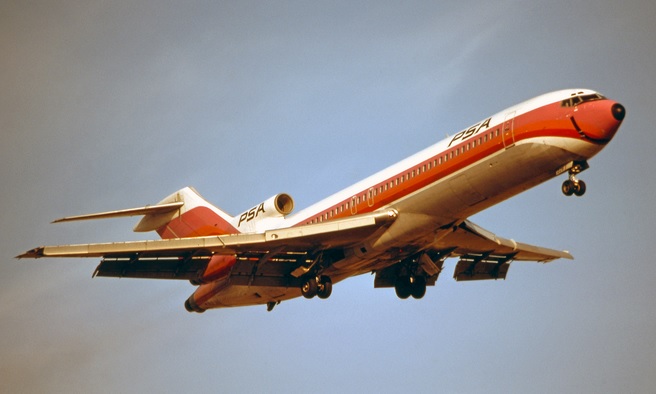 Pacific Southwest Airlines (PSA) was a United States airline headquartered in San Diego, California, that operated from 1949 to 1988. It was the first large discount airline in the United States. PSA called itself "The World's Friendliest Airline" and painted a smile on the nose of its airplanes, the PSA Grinningbirds. Opinion L.A. of the Los Angeles Times called PSA "practically the unofficial flag carrier airline of California for almost 40 years."[1] The airline initially operated as an intrastate air carrier wholly within California before expanding to other destinations in other states following the Airline Deregulation Act of 1978.
PSA was one of the four airlines that formed US Airways, the others being America West Airlines, Piedmont Airlines and Allegheny Airlines. PSA was merged into USAir in 1988. USAir then changed its name to US Airways which in turn merged with American Airlines in 2013.
PSA's Boeing customer number was 14. Following the acquisition by and merger with USAir, the PSA name was given to Jetstream International Airlines by US Airways to preserve the PSA name and trademarks.

A PSA Boeing 737-200 with the “smiling” livery in 1974.
Kenny Friedkin founded the airline in 1949 with a $1,000-a-month leased Douglas DC-3. Friedkin obtained information from a travel agent upon starting the airline due to lessons learned from a failed precursor airline (Friedkin Airlines).[2] The DC-3 inaugurated a weekly round trip from San Diego to Oakland via Burbank. Reservations were initially taken from a World War II surplus latrine refitted as a ticket office. In 1951, PSA flights moved from Oakland to San Francisco International. In 1955, PSA bought two Douglas DC-4s from Capital Airlines and painted boxes around the windows to make the planes resemble the Douglas DC-6.
In January 1958, it scheduled 37 DC-4s a week Burbank to San Francisco (29 of which originated in San Diego) and four nonstop flights San Diego to San Francisco; the fare from Burbank to San Francisco was $9.99. United, Western and TWA then had 241 non-stop flights each week from Los Angeles to San Francisco and 49 flights a week Burbank-San Francisco. About half of their flights were First Class only ($22.05); the rest carried coach passengers for $13.50. (All fares were subject to 10% federal tax.) Later in 1958, PSA shifted some flights from Burbank to Los Angeles; that year it carried 296,000 passengers.

In November 1959 PSA began flying Lockheed L-188 Electra turboprops with 92 seats and a six-seat lounge, replacing 70-seat DC-4s. Boeing 727-114s, Boeing 727-214s and Boeing 737-214s replaced the Electras in 1966-70. The May 1965 OAG shows 103 Electras a week Los Angeles to San Francisco, 32 a week Los Angeles to Oakland, 34 a week Burbank to San Francisco and 5 a week San Diego to San Francisco. Los Angeles-San Francisco was scheduled for 60 minutes, Burbank-San Francisco was 55. In 1966 PSA started flying to San Jose, and in 1967 to Sacramento Executive Airport; later that year they and everyone else moved to then new Sacramento International Airport. Ontario was added in 1968 and Long Beach, Fresno and Stockton in 1971–72. Starting in 1974 PSA briefly operated several wide body Lockheed L-1011 TriStar jetliners until 1976 before deeming them unprofitable and selling them; PSA's L-1011-1s were unique in having lower deck seating.[4] The L-1011s flew intrastate routings of Los Angeles-San Francisco, Los Angeles-San Francisco-Sacramento and San Diego-Los Angeles-San Francisco. PSA was the only intrastate air carrier in the U.S. ever to operate wide body jetliners. Electras returned in 1975 for flights to Lake Tahoe that ended in 1979. (Lake Tahoe, in the Sierra Nevada Mountains, did not allow airline jets until the 1980s although Pacific Air Lines briefly operated Boeing 727-100 jetliners into Lake Tahoe in 1966.) Major intrastate competitor Air California also flew Electras to Lake Tahoe until 1979-80 but then returned to Lake Tahoe as AirCal with McDonnell Douglas MD-80s and Boeing 737-300s after the jet ban ended. PSA never served Lake Tahoe again after retiring its Electras.
After airline deregulation, PSA expanded beyond California to Reno, Las Vegas, Salt Lake City, Phoenix, Tucson and Albuquerque. Its first flight beyond California was Oakland to Reno in December 1978. The airline introduced automated ticketing and check-in machines at several airports and briefly flew to Cabo San Lucas in Mexico. When PSA's plan to buy the assets of Braniff International Airways fell through, the airline expanded its network north to Washington, Oregon and Idaho. PSA used new BAe 146s to smaller airports like Eureka, California, and Concord, California. PSA held a "Name the Plane" contest, publicized in full-page newspaper advertisements, to name the fleet, with the prize being a private flight for the winner and 99 friends. The winning entry was Smiliner[5] submitted by Dr. Hugh Jordan of Whittier, California.
Revenue Passenger-Miles/Kilometers, in millions

In 1986, Western and AirCal were purchased (by Delta Air Lines and American Airlines respectively).
An hour after the AirCal deal was announced PSA agreed to merge with USAir, which was completed in 1987. At the time, PSA was in talks with Boeing about acquiring a Boeing 757-200 but never ordered it. PSA's last flight was on April 8, 1988. The PSA route network slowly disintegrated within USAir and was gone by 1994. Most of the former airline's assets were scrapped or moved to USAir's hubs on the East Coast. PSA's base at San Diego International Airport was gutted and is now that airport's commuter terminal. PSA had planned from the start to become a nationwide carrier, but this never came to fruition. By the time of the merger, PSA's route system covered the western United States as far east as Colorado and New Mexico, and as far north as Washington state.
In the San Diego Aerospace Museum a display showcases PSA, the city's home town airline.
PSA was one of the sponsors of The Dating Game TV show on ABC from 1965 to 1973.

US Airways Airbus A319 painted in PSA's livery
After the 2005 merger of US Airways and America West, a US Airways Airbus A319 was repainted in PSA's livery as one of four heritage aircraft commemorating the airlines that had merged to form the present-day US Airways. The aircraft was dedicated at San Diego International Airport's commuter terminal (PSA's former operations base) on March 30, 2006, and flew routes similar to PSA's.
Corporate culture[edit]
PSA was known for its sense of humor. Founder Ken Friedkin wore Hawaiian shirts and encouraged his pilots and stewardesses to joke with passengers. Its slogan was "The World's Friendliest Airline", and its recognizable trademark was a smile painted on the nose of each plane and an accompanying advertising campaign declaring "Catch Our Smile". Because of the major San Diego flight schedule and its discount fares, military personnel nicknamed PSA the "Poor Sailor's Airline." After PSA was bought by USAir, ex-PSA mechanics would occasionally paint smiles on USAir planes as a joke.

During the 1960s, PSA was also known for the brightly colored flight attendant uniforms that included miniskirts. In the early 1970s, the fashion changed to hotpants.[8] One PSA flight attendant, Marilyn Tritt, wrote a book about her tenure at the company titled Long Legs and Short Nights (ISBN 0-9649577-0-1).
Management diversified in the early 1970s into a broadcasting venture called PSA Broadcasting. Radio stations were purchased in Sacramento (96.9 KPSC later KEZC), San Jose (106.5 KEZD later KEZR), Los Angeles (107.5 KPSA later KLVE) and San Diego (102.9 KEZL now KLQV). All ran easy listening formats (hence EZ call letter combinations). The idea was to keep some of the airline's advertising dollars within the broadcasting company as well as collect some co-op (co-operative advertising) from businesses doing business with the airline. These stations were sold to various interests in the late 1970s.

Throughout PSA's lifetime as an airline, the flight attendants, with their humor, over-the-top passenger service, and sense of duty, helped to create a loyal passenger following. One flight attendant, Sandy Daniels, with the help of a frequent flyer, started the "Precious Stewardess Association". Frequent fliers would bring tasty treats to the crew, particularly on morning flights. In turn, PSA started the "Precious Passenger Association", with certificates and free drinks given to friendly and helpful passengers.

Ken Friedkin's son Tom was a PSA pilot in 1962 when the elder Friedkin died abruptly of a stroke, aged 47. A year later, Tom Friedkin's mother died, making him the largest shareholder of PSA. Tom had a seat on the Board of Directors, but continued working as a full-time pilot for the airline.
Southwest Airlines founder Herb Kelleher studied PSA extensively and used many of the airline's ideas to form the corporate culture at Southwest, and even on early flights used the same "Long Legs And Short Nights" theme for stewardesses on board typical Southwest Airlines flights.
PSA helped train the first class of mechanics for Southwest Airlines and lent the fledgling carrier flight manuals and other needed items.