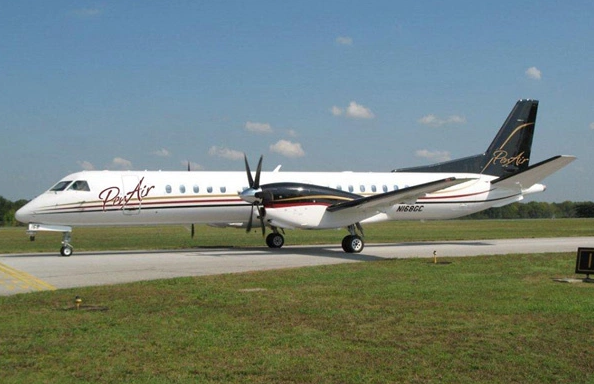 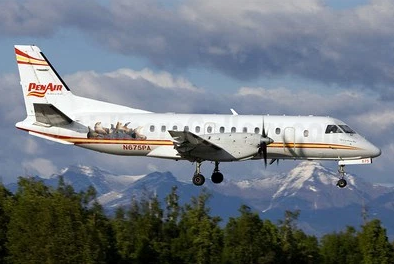 Peninsula Airways, operating as PenAir, is an American airline headquartered in Anchorage, Alaska. It is Alaska's second largest commuter airline operating an extensive scheduled passenger and cargo service, as well as charter and medevac services. Its main base is Ted Stevens Anchorage International Airport, with other hubs located at Portland International Airport in Oregon and Boston Logan International Airport in Massachusetts. PenAir currently has a code sharing agreement in place with Alaska Airlines with its flights operated in the state of Alaska as well as all of its flights in the lower 48 states appearing in the Alaska Airlines system timetable.

In 2013 Penair received $6,363,008 in annual Federal subsidies for Essential Air Services that it provided to rural airports in Plattsburgh, New York and Presque Isle, Maine.

History
Peninsula Airways was founded by Orin Seybert in 1955. Seybert was 19 years old, living in Pilot Point, Alaska and owned a 1946 two-seat Taylorcraft. In 1956, a four-seat Piper Tri-Pacer was added. On March 1, 1965 Peninsula Airways became incorporated and purchased the fixed base operation (FBO) in King Salmon.

In 1969, Peninsula Airways acquired all assets of Tibbetts-Herre Airmotive, which had operated from Naknek since 1950. By 1973, regular service was provided between King Salmon and the Pribilof Island communities, St. Paul and St. George. Charter service was also extended into the Aleutian Islands, Dutch Harbor, Atka and Adak with Grumman G-44 Widgeon amphibious aircraft.

In 1977, two Grumman Goose amphibious aircraft were purchased from Reeve Aleutian Airways, and the sub-contract was expanded to cover all locations certificated to Reeve throughout the Alaskan Peninsula and Aleutian Islands. This required setting up an operating base at Cold Bay, with hangars, offices and employee housing.

In 1980, the Civil Aeronautics Board awarded a Part 401 Certificate of Public Convenience and Necessity to Peninsula Airways, and all aircraft operations were conducted under Part 135 of the Federal Air Regulations.

In 1985, Peninsula Airways acquired all assets of Air Transport Service, Inc., based in Kodiak. Included in the deal was a hangar and office facility with approximately six aircraft and scheduled year-round service to all points on the Island. A base was established in Anchorage with two Cessna Conquest turboprops offering charter service from Anchorage to the Pribilof Islands. Scheduled service from Anchorage to King Salmon and Dillingham was added a year later.

The first Fairchild Swearingen Metroliner propjet was placed into service in 1987 and Metro aircraft remained in the fleet until 2011.

In 1988, several bush operators in Dillingham had their certificates revoked by the Federal Aviation Administration (FAA), prompting Peninsula Airways to set up an operation there. A hangar and aircraft were purchased and service to the surrounding communities began.

In 1991, Peninsula Airways began doing business as PenAir and became a code sharing and Mileage Plan partner with Alaska Airlines. PenAir transitioned to FAA Part 121 regulations in 1996, operating under both Part 135 and 121. PenAir was the first regional airline in the United States to make the 10-19 seat required conversion, including a dispatch department.

In 1997, PenAir acquired two Saab 340B aircraft and, in 1998, moved into a new hangar/office complex in Anchorage, Alaska. The airline commenced operations from Boston's Logan International Airport in 2012 after being awarded Essential Air Service routes from Logan to Bar Harbor, Maine, Plattsburgh, New York and Presque Isle, Maine.

In 2016, PenAir bid on multiple Essential Air Service (EAS) routes to be operated between Denver, CO and several small cities in Kansas and Nebraska. These bids proposed the creation of a hub in Denver (DEN) and service to several cities currently served by Great Lakes Airlines: Dodge City and Liberal, Kansas; Kearney, North Platte, and Scottsbluff, Nebraska. All of these cities' respective airport authorities have recommended PenAir to provide service.  PenAir has since announced it will initiate new service between Denver and these destinations.

As of January 2016 the PenAir fleet consists of the following aircraft:

PenAir Fleet
Aircraft In Service Orders Seats Notes
F Y T
Saab 340B 15 — — 30 30
Saab 340A 2 — Cargo
Saab 2000 3 2 — 45 45 Orders are for used aircraft
PenAir was among the very last airlines in the world to operate the venerable Grumman G-21A Goose seaplane on scheduled flights. This piston powered amphibious aircraft was used to resupply remote coastal locations where no land-based airstrip existed. On December 21, 2012, the last Grumman Goose made its last flight from Unalaska to Anchorage and was officially retired from the fleet.[15] PenAir also previously operated another piston powered amphibious aircraft type being the Grumman G-44 Widgeon.

The airline previously operated several turboprop powered aircraft types as well such as the Cessna 208B Grand Caravan and Cessna 441 Conquest as well as different Fairchild Swearingen Metroliner models including the Metro II, Metro III and Metro 23. 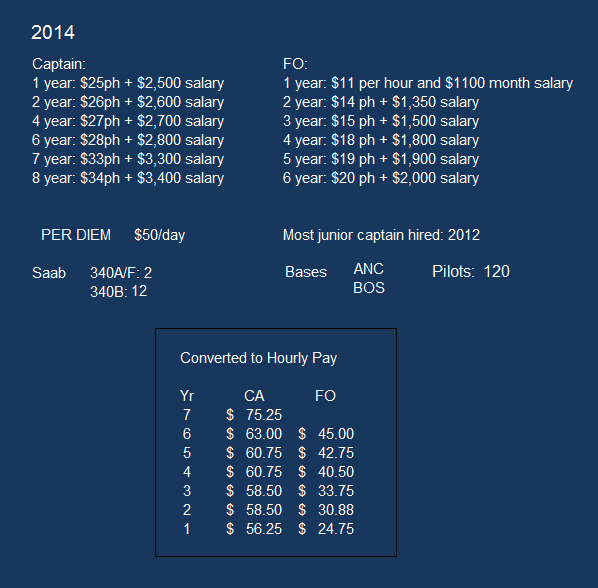 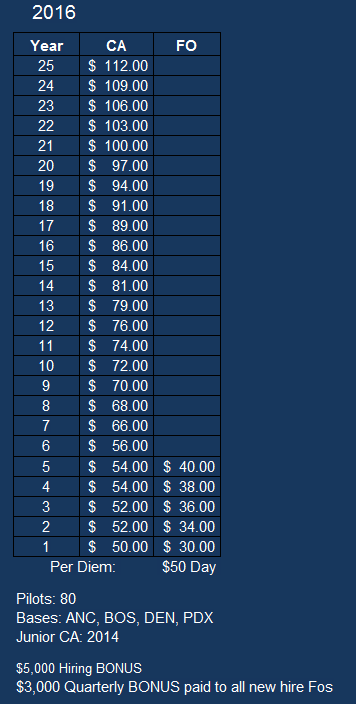