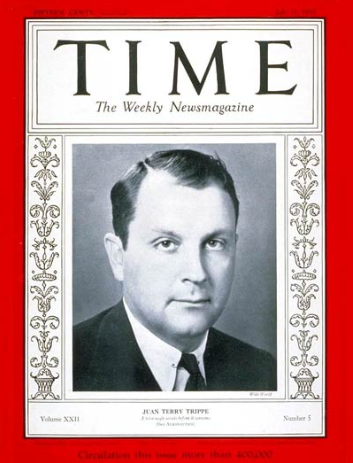 Pan American Airways, Incorporated (PAA) was founded as a shell company on March 14, 1927 by Air Corps Majors Henry H. "Hap" Arnold, Carl A. Spaatz, and John H. Jouett as a counterbalance to the German-owned Colombian carrier SCADTA, operating in Colombia since 1920. SCADTA lobbied hard for landing rights in the Panama Canal Zone, ostensibly to survey air routes for a connection to the United States, which the Air Corps viewed as a precursor to a possible German aerial threat to the canal. Arnold and Spaatz drew up the prospectus for Pan American when SCADTA hired a company in Delaware to obtain air mail contracts from the U.S. government. Pan American was able to obtain the U.S. mail delivery contract to Cuba, but lacked any aircraft to perform the job and did not have landing rights in Cuba.

On June 2, 1927 Juan Trippe formed the Aviation Corporation of the Americas (ACA) with the backing of powerful and politically connected financiers who included Cornelius Vanderbilt Whitney and W. Averell Harriman, and raised $250,000 in startup capital from the sale of stock. Their operation had the all-important landing rights for Havana, having acquired American International Airways, a small airline established in 1926 by John K. Montgomery and Richard B. Bevier as a seaplane service from Key West, Florida, to Havana. ACA met its deadline of having an air mail service operating by October 19, 1927 by chartering a Fairchild FC-2 floatplane from a small Dominican Republic carrier, West Indian Aerial Express.
The Atlantic, Gulf, and Caribbean Airways company was established on October 11, 1927 by New York City investment banker Richard Hoyt, who served as president. This company merged with PAA and ACA on June 23, 1928. Richard Hoyt was named as president of the new Aviation Corporation of the Americas, but Trippe and his partners held 40% of the equity and Whitney was made president. Trippe became operational head of Pan American Airways, the new company's principal operating subsidiary.

"Birthplace of Pan American World Airways", Key West, Florida
The U.S. government approved the original Pan Am's mail delivery contract with little objection, out of fears that SCADTA would have no competition in bidding for routes between Latin America and the United States. The government further helped Pan Am by insulating it from its U.S. competitors, seeing the airline as the "chosen instrument" for U.S.-based international air routes. The airline expanded internationally, benefiting from a virtual monopoly on foreign routes.
Trippe and his associates planned to extend Pan Am's network through all of Central and South America. During the late 1920s and early 1930s, Pan Am purchased a number of ailing or defunct airlines in Central and South America and negotiated with postal officials to win most of the government's airmail contracts to the region. In September 1929 Trippe toured Latin America with Charles Lindbergh to negotiate landing rights in a number of countries, including Barranquilla on SCADTA's home turf of Colombia, Maracaibo and Caracas. By the end of the year, Pan Am offered flights along the west coast of South America to Peru. The following year, Pan Am purchased the New York, Rio, and Buenos Aires Line, giving it a seaplane route along the east coast of South America to Buenos Aires, Argentina, and westbound to Santiago, Chile. Its Brazilian subsidiary NYRBA do Brasil was later renamed as Panair do Brasil. Pan Am also partnered with Grace Shipping Company in 1929 to form Pan American-Grace Airways, better known as Panagra, to gain a foothold to destinations in South America.
Pan Am's holding company, the Aviation Corporation of the Americas, was one of the most sought after stocks on the New York Curb Exchange in 1929, and flurries of speculation surrounded each of its new route awards. In April 1929 Trippe and his associates reached an agreement with United Aircraft and Transport Corporation (UATC) to segregate Pan Am operations to south of the Mexico – United States border, in exchange for UATC taking a large shareholder stake (UATC was the parent company of what are now Boeing, Pratt & Whitney, and United Airlines). The Aviation Corporation of the Americas changed 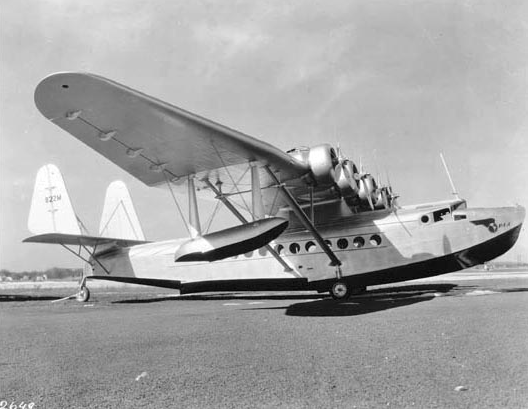 its name to Pan American Airways Corporation in 1931.

Critical to Pan Am's success as an airline was the proficiency of its flight crews, who were rigorously trained in long-distance flight, seaplane anchorage and berthing operations, over-water navigation, radio procedure, aircraft repair, and marine tides. During the day, use of the compass while judging drift from sea currents was normal procedure; at night, all flight crews were trained to use celestial navigation. In bad weather, pilots used dead reckoning and timed turns, making successful landings at fogged-in harbors by landing out to sea, then taxiing the plane into port. Many pilots had merchant marine certifications and radio licenses as well as pilot certificates.[14][15] A Pan Am flight captain would normally begin his career years earlier as a radio operator or even mechanic, steadily gaining his licenses and working his way up the flight crew roster to navigator, second officer, and first officer. Before World War II it was not unusual for a captain to make engine repairs at remote locations.

Pan Am's mechanics and support staff were similarly trained. Newly hired applicants were frequently paired with experienced flight mechanics in several areas of the company until they had achieved proficiency in all aircraft types. Emphasis was placed on learning to maintain and overhaul aircraft in harsh seaborne environments when faced with logistical difficulties, as might be expected in a small foreign port without an aviation infrastructure or even an adequate road network. Many crews supported repair operations by flying in spare parts to planes stranded overseas, in some cases performing repairs themselves.