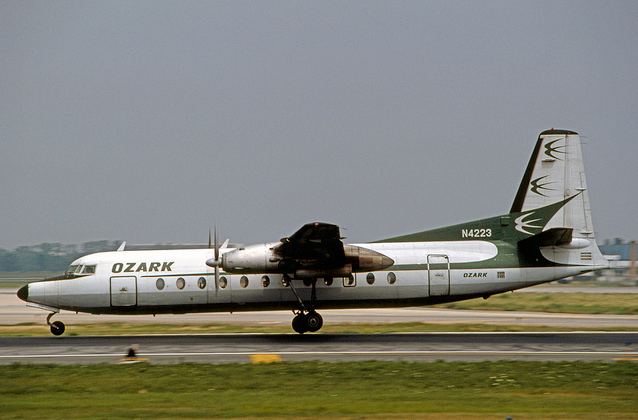 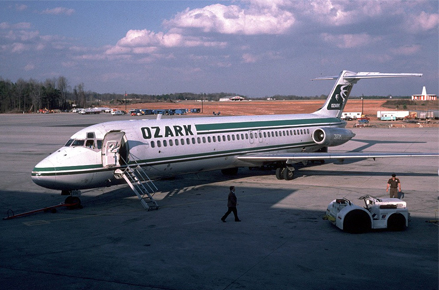 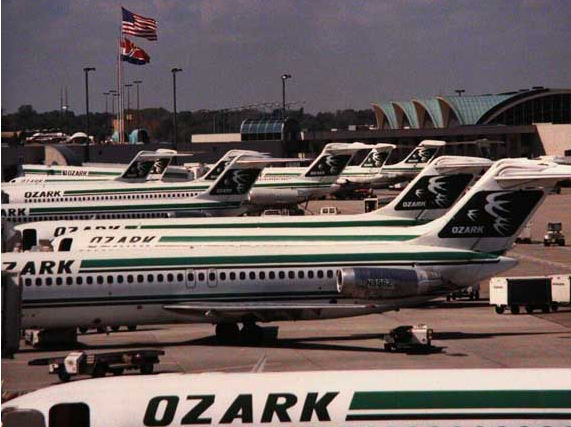 Ozark Air Lines operated in the United States from 1950 until 1986 when it was purchased by Trans World Airlines. A smaller airline with the same name (which was also known as Great Plains Airlines) operated in 2000–2001. From 1950 until 1986 Ozark's headquarters was at Lambert–St. Louis International Airport in St. Louis County, Missouri.

On 1 September 1943 Ozark Air Lines was founded to fly services from Springfield, Missouri, and in January 1945 it began flights between Springfield and St. Louis on Beech 17 Staggerwings, replaced by Cessna AT-17 Bobcat in the late 1940s. The required license from the Civil Aeronautics Board was not forthcoming and operations had to stop.

In July 1950 Ozark was granted a certificate to operate Parks Air Transport routes not previously activated. Services were started on 26 September 1950 using Douglas DC-3s from St. Louis to Chicago, Tulsa and Memphis. In 1955 the airline had 13 DC-3s flying to 35 cities between Sioux City, Indianapolis, Wichita and Nashville. Ozark's main hub was Lambert–St. Louis International Airport. Like other Local Service airlines it was subsidized; in 1962 its operating "revenues" of $14.0 million included $4.5 million of federal subsidy.

Fairchild-Hiller FH-227B of Ozark at Chicago O'Hare Airport in 1975
In 1961 Ozark's network reached from Minneapolis to Nashville and from Kansas City to Indianapolis and Louisville. Denver was added in 1966 and in 1969 the network sprouted eastward: Ozark was awarded nonstops from Champaign and Peoria to Washington Dulles, continuing to New York LaGuardia. Atlanta was added in 1978 and four Florida cities in winter 1978-79.

Merger with TWA
In the mid-1980s Ozark and TWA had a de facto duopoly at Lambert–St. Louis International Airport, a hub for both. Ozark accounted for 26.3 percent of boardings at STL in 1985, while TWA accounted for 56.6 percent. On March 1, 1986 the two airlines announced plans to merge: TWA would buy Ozark for $242 million in cash. Shareholders of both airlines approved the merger by late summer, and the U.S. Department of Transportation gave its approval on September 12, 1986.

Ozark ceased to exist as an independent company on October 27, 1986. The Ozark DC-9s were gradually painted with a modified paint scheme with "TWA" in the tail. Over the next couple of years the fifty Ozark airplanes were repainted in the TWA livery.

A year later the company ceased operations and sold its assets to the now-bankrupt Great Plains Airlines, based in Tulsa, Oklahoma.

Sales and marketing
Reservations
From the 1960s through the late 1980s, Ozark Air Lines' reservations department used a special toll-free WX telephone prefix in New Jersey which could be reached only in certain areas of the state by dialing 0 and asking the New Jersey Bell operator to connect to Ozark's WX number: WX-8300. The number could not be dialed directly by the customer and was only available to certain telephone exchanges where WX was available. (Direct-dial toll-free service made WX numbers obsolete, and they have been largely phased out.)