National Airlines was a United States airline that operated from 1934 to 1980. For most of its existence, the company was headquartered near Miami, on the grounds of Miami International Airport in unincorporated Miami-Dade County, Florida. At its height, National Airlines had built up a comprehensive network of "Coast-to-Coast-to-Coast" flights, linking Florida and the Gulf Coast with cities along the East Coast and the large population centers on the West Coast. It was one of three major US airlines that offered scheduled passengers flights to Europe during the 1970s.

1930s
National Airlines was founded by George T. Baker in 1934, originally being headquartered in St. Petersburg, Florida and based at the city's Albert Whitted Airport. On 15 October of that year, revenue flights were launched, initially transporting passengers and mail from St. Petersburg to a few destinations within Florida using a fleet of two Ryan ST monoplanes. In 1935, the Stinson Trimotor was introduced with National Airlines, which were soon replaced by the Lockheed Model 10 Electra. In 1939, the company headquarters were moved to Jacksonville. By the end of the decade, the National Airlines network spanned from Miami to New Orleans, on what it called the Buccaneer Route.

1940s
In 1940, the Lockheed Model 18 Lodestar became the new backbone of the National Airlines fleet. National Airlines was awarded traffic rights from Florida to New York City and other destinations along the East Coast in 1944, with flights on that route being launched in 1945. In 1946, National was granted governmental approval to operate into Havana, Cuba, which coincided with the introduction of the Douglas DC-4. This new aircraft type also allowed for non-stop flights between Miami and New York,[13] which were inaugurated on February 14, 1946. In the same year, National Airlines relocated its corporate headquarters to Miami International Airport, a move which was completed with the opening of an aircraft maintenance base at the airport in 1950. By then, National Airlines had grown to operate an extensive network throughout the Eastern and South Eastern United States.

With the Douglas DC-6, the first pressurized aircraft was put in service with National Airlines on July 1, 1947. The DC-6 allowed the New York flights to be operated on the great circle route over open water, which reduced the travel from five to four hours. To acknowledge the superior passenger experience, flights on the DC-6 were marketed as Star Service. National Airlines launched another successful advertising: the Piggy Bank Vacations campaign, promoting low-fare flights to Florida during the off-peak summer season.

This decade saw the introduction of the Convair 340/440 and the Douglas DC-7 into the National Airlines fleet., as well as the Lockheed L-1049 Super Constellation. On 10 December 1958, National became the first US airline to operate domestic jet flights, using a Boeing 707 that was leased from Pan American World Airways on the Miami-New York route. In 1959, the Lockheed L-188 Electra became another new aircraft type operated by National Airlines. At the end of the decade, Houston and Boston formed the endpoints of the route network.

1960s
With the award of traffic rights on the southern transcontinental route on March 11, 1961 National Airlines gained access to destinations in California (previously, these markets had been covered through interline agreements with American Airlines and Delta Air Lines). Concerning international destinations in Central and South America, a cooperation with Pan Am was set up.
In 1962, Louis "Bud" Maytag (a member[specify] of the Maytag family who had previously led Frontier Airlines) bought a majority share in National Airlines and replaced George T. Baker as CEO. The airline further modernized its fleet with the Douglas DC-8 (in 1960), as well as by placing an order for 10 Boeing 727s, the first of which was delivered in 1964. Following the retirement of the Electras in 1968, National Airlines became an all-jet airline.1970s

On 16 June 1970, National Airlines re-introduced international flights, when its Miami-London route was opened (flights to Cuba had been suspended in 1961 due to the Cuban Revolution). In October, the Boeing 747-100, at that time the largest commercial airliner, entered service with National on the Miami-Los Angeles Route. Also in 1970, National Airlines opened its own terminal at John F. Kennedy International Airport, which was dubbed the Sundrome.
Having placed an order for 10 aircraft back in 1969, the Douglas DC-10 was put in service on the Miami-New York route on December 15, 1971. A 1971 publicity campaign designed by F. William Free promoting National's flight attendants was criticized by the National Organization for Women as being sexist due to the slogan "I'm Cheryl. Fly me." With the advent of the intercontinental DC-10-30, National Airlines expanded its European network by adding Paris (inaugurated on 22 June 1977), as well as Frankfurt, Amsterdam (both in 1978) and Zurich (in 1979). 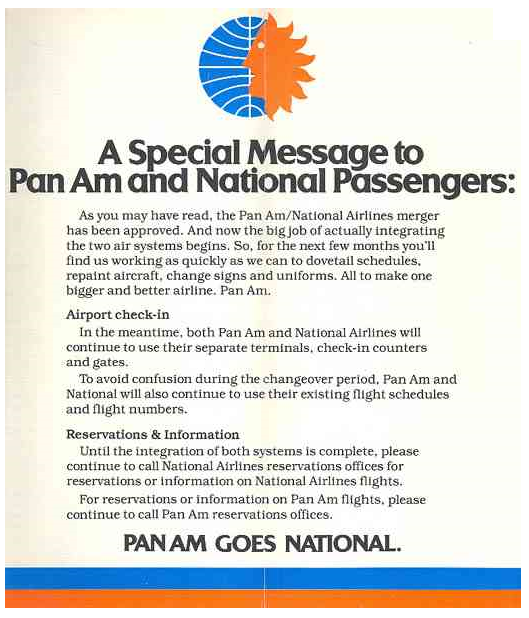 In the late 1970s, several airlines tried to take over National Airlines, which had evolved into a major player on the southern transcontinental and Florida-East Coast airline markets. In 1978, Texas International Airlines (which was led by Frank Lorenzo at that time) acquired 24.6 percent of the shares, but did not succeed in the subsequent tender offer takeover bid. A similar attempt was made by Eastern Air Lines in 1979. At the same time, the shares held by Texas International were sold to Pan American World Airways, which emerged as a white knight and succeeded to accumulate a controlling majority. On 7 January 1980, the acquisition was completed, with Pan Am taking over the National Airlines fleet and route network.