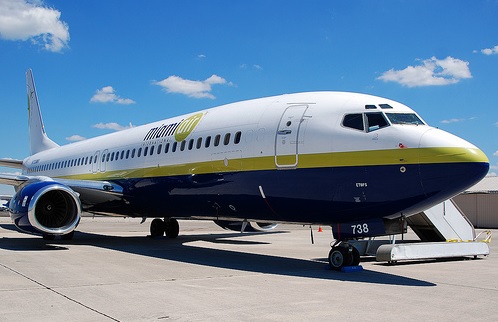 The airline was established in August 1990 and started operations in October 1991 using Boeing 727-200 aircraft on lease from Xerox Credit Corporation.
George Lyall who had a long career at Eastern Air Lines and Pan Am World Airways was Chairman and Ross Fischer who had run System Operations at People Express and Eastern was President. These executives were the primary shareholders and founders, which also included a variety of former Eastern personnel, a former "Big 8" partner with extensive industry audit experience, an upcoming Miami lawyer and several former People Express operations personnel. By 2000, the company had grown to 8 owned Boeing 727 aircraft and revenues in excess of $100 million.
That year, a consortium led by Eagle Global Logistics purchased a majority stake in the company, primarily from retiring shareholders and embarked on converting the company's Boeing 727s to cargo aircraft to operate its cargo hub in Austin, Texas under the Quest International name. Simultaneously, new Boeing 737-800s were leased to provide the passenger service of the converted Boeing 727s. In 2001, the events of 11 Sept and the awarding of the postal contract to FedEx Express caused lease rates and values of Boeing 727s to plummet and in early 2002 EGL stopped utilizing Quest cargo aircraft and they were sold off.
Meanwhile in large part due to the huge jump in military business, Miami Air's passenger business thrived and the company grew to 8 Boeing 737-800s and 2 passenger Boeing 727s by 2005. At that time one of the existing shareholders (TSI Holding Company) expressed a desire to purchase the entire company and bought out the other EGL consortium and remaining original shareholders.
At the present time, Miami Air International with its Boeing 737-800s remains an ad hoc charterer with a wide customer base. The military, sport teams, cruise lines, tour operators and incentive groups are the main customers. Its Boeing 737-400s which are in first class configuration are devoted mainly to professional sports teams in hockey, baseball and basketball. Its operations are worldwide covering every continent except Antarctica and it lands at more airfields annually than any other US carrier.
The IATA code has been changed from GL to LL due to Air Greenland use of the same code. Air Greenland was the first one to use the code.
Miami Air International is wholly owned by TSI Holdings and has 405 employees (at March 2007).