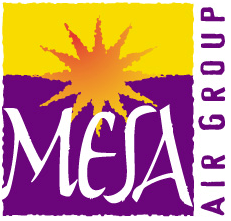 Mesa began when JB Aviation, a fixed base operator at Farmington's Four Corners Regional Airport, established a charter flight department in 1980. In 1982, using $140,000 in capital, Larry Risley, an A&P mechanic with JB Aviation, and his wife Janie, purchased the flight department and its single Piper Chieftain aircraft, and established Mesa Air Shuttle, flying a single route between Farmington and Albuquerque.

During its first few years, Mesa found itself in a very competitive environment as it slowly expanded throughout New Mexico. Six other carriers competed against Mesa: Air Midwest, Sun West Airlines, Pioneer Airlines, JetAir, Trans-Colorado Airlines and Airways of New Mexico. As fare wars erupted between the carriers, Mesa was able to survive due to its low cost structure. It performed maintenance in house, many of Mesa's employees performed multiple duties: pilots and mechanics doubled as gate agents and ramp agents.

In 1984, the Civil Aeronautics Board awarded Mesa its first Essential Air Service (EAS) contract, to serve Roswell, Hobbs, and Carlsbad, winning the contract from Air Midwest. A second round of EAS bidding resulted in Mesa winning contracts to serve Silver City, Alamogordo, Las Cruces, and Gallup.
By 1987, Mesa had grown from six employees in 1982 to 187 employees: from a single Chieftain in 1982 to three Beechcraft 99s in 1984 to five Beechcraft 99s and four Beechcraft 1900s. Of the six competing air carriers in 1982, none remained to challenge Mesa in New Mexico by 1987.
Mesa continued to grow in 1987. It listed on NASDAQ: MESA with an initial public offering of 865,000 shares of stock at $7.50. It expanded outside New Mexico by acquiring routes in Wyoming, Utah, and Colorado from Centennial Airlines.

To provide a pool of trained, qualified pilots, in 1989, Mesa established an ab-initio flight training program with San Juan College, a local community college. By the end of the 1980s Mesa poised itself for future growth and expansion.