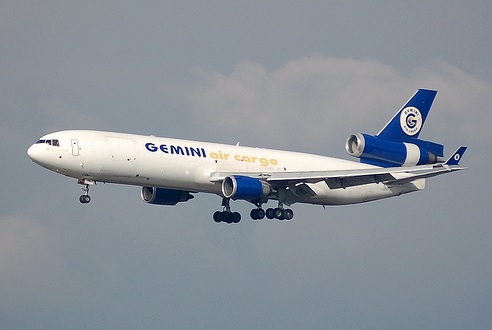 The airline was established in December 1995 by William Stockbridge, with financial backing from Lehman Brothers and Green Tree Capital. It began operations as an ACMI (Aircraft, Crews, Maintenance, Insurance) using DC-10-30F aircraft which were obtained from Lufthansa and converted to cargo configuration by Aeronavali in Venice. Prior to obtaining its own FAR Part 121 certificate, Gemini operated with crews from Sun Country Airlines under Sun Country's certificate for several months before certification in October 1996.

In July 1999 the airline was acquired by the Carlyle Group. In August 2006 the airline emerged from bankruptcy reorganization in a debt restructuring involving a DIP (debtor in position) and exchange of debt for equity with Bayside Capital. Bayside had pledged to grow Gemini and take advantage of the fast-growing cargo market into the next two decades.

But in the early summer of 2008 Gemini filed again for bankruptcy protection. The reasons were to be found in the sudden oil price increase that hit hard the thirsty McDonnell Douglas DC-10-30F fleet and the economic crisis of 2008.

Gemini Air Cargo ceased operations the evening of August 12th, 2008 and the airline later confirmed that month it was in liquidation.

As of December 2008, Gemini Air Cargo was purchased by Gemini Worldwide Holdings LLC with plans to start a new cargo/passenger service as Gemini Worldwide Airways. Operations have not started as of early 2010