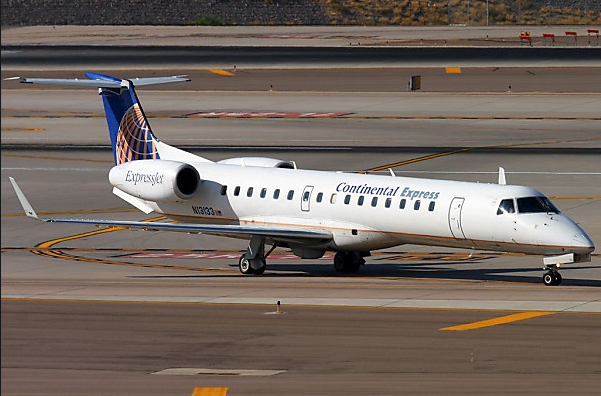 The airline was established in 1986 and started operations in 1987. Its origins were in a group of small commuter airlines acquired by Texas Air Corporation / Continental Airlines. These included Bar Harbor Airlines in Maine, Provincetown-Boston Airlines in New England, Rocky Mountain Airways in Denver, Colorado and Britt Airways in Terre Haute, Indiana. Express Jet operates under the original Federal Aviation Administration Part 121 certificate issued to Britt, which began operations as Continental Express in April 1987 and was later acquired by Continental Airlines. ExpressJet Airlines, Inc. incorporated in 1996.

ExpressJet was spun off from Continental in 2002. Afterwards the company began plans to move into a corporate headquarters location. ExpressJet has over 8,000 employees. ExpressJet Holdings also owns American Composites LLC, Saltillo Jet Center, and InTech Aerospace Services. Together with other facilities throughout the U.S. they make up ExpressJet Services which provides third-party maintenance, repair and overhaul services for a variety of aircraft types. ExpressJet Holdings also has non-controlling interests in Wings Holdings LLC 49% and Flight Services and Systems Inc 44%.

Before ExpressJet became independent, it was headquartered in Continental Center I in Downtown Houston.

Following a December 2005 decision by Continental to reduce ExpressJet's Continental Express flying by 69 aircraft, the airline elected to operate the aircraft independently. On December 31, 2006, the airline began its charter operation. It currently operates 6 aircraft for charter services under the Corporate Aviation Division. On February 5, 2007, the airline announced service to 24 cities in the west coast, southwest, and midwest regions of the United States beginning in April 2007.

On April 2, 2007, the airline began point-to-point services under its own name from locations throughout the USA. The airline had a total of 42 aircraft in their branded operation. According to ExpressJet CEO James Ream, LA/Ontario International Airport in Ontario, California (alternate airport to nearby Los Angeles International Airport) would become the airline's "biggest center of operation".

JetBlue Airways announced on March 7, 2007 that ExpressJet would operate four of its Embraer 145 jets on JetBlue routes while JetBlue's Embraer 190 jets are being serviced.

In June 2007, the airline began service at Los Angeles International Airport to western ski markets and Mexico on behalf of Delta Air Lines under the Delta Connection banner using 10 EMB 145XR aircraft. In July 2007, the agreement was increased to 18 aircraft. In July 2008, the airlines announced that their agreement had been terminated and ExpressJet would end all Delta Connection flying by September 1.

A few days after announcing the end of its agreement with Delta, ExpressJet announced on July 8, 2008, that it would also end its independent ExpressJet-branded flying on September 2 due to the oil price increases since 2003. This resulted in the furlough of 347 pilots.

An incident occurred where passengers were forced to stay on a parked plane at Rochester, Minnesota, on August 21, 2009, for six hours with no food and overflowing toilets. The airline crew tried over thirty times to call the contract carrier, Delta Connection, (which services the Rochester airport) to let the passengers off. The agents for the regional Mesaba Airlines refused. The Department of Transportation announced its findings in September 2009, citing the main cause of the incident as the Mesaba Airlines station's refusal to park the aircraft. However, Continental Airlines and ExpressJet were also fined for the part they played in the incident.

ExpressJet began a temporary contract with United Airlines to fly as a United Express carrier beginning in June 2009. The contract was for approximately 10 aircraft that operated out of United's O'Hare and Washington (Dulles) hub. The aircraft were flown in ExpressJet livery. The contract ended on September 2, 2009.

In late 2010 ExpressJet signed a multiple year contract with United Airlines for 22 ERJ-145 aircraft. The aircraft were flown, for the first time, in full United Express colors. Additionally, 10 more ERJ-145s; in ExpressJet colors, operated for United during the peak Summer travel season in 2010. The first flights under this new contract started December 1, 2009 and all 22 aircraft were in United Express service by Spring 2010.

ExpressJet operated its own point-to-point service with its main hub at LA/Ontario International Airport in Ontario, California. This service ended on September 2, 2008.

In April 2008, SkyWest Airlines proposed an acquisition of ExpressJet at a price of $3.50/share. ExpressJet Holdings Inc. said its special committee unanimously rejected the proposal. SkyWest rescinded the offer in early June after ExpressJet Holdings and Continental signed a new 7-year Capacity Purchase Agreement. This proposal was ultimately not successful.

In July 2011, the name "SureJet", with the tagline, "Ally, Partner, Friend" was revealed. However, the almost instantaneous universal ridicule and derision resulted in the withdrawal of the SureJet name within 2 days.