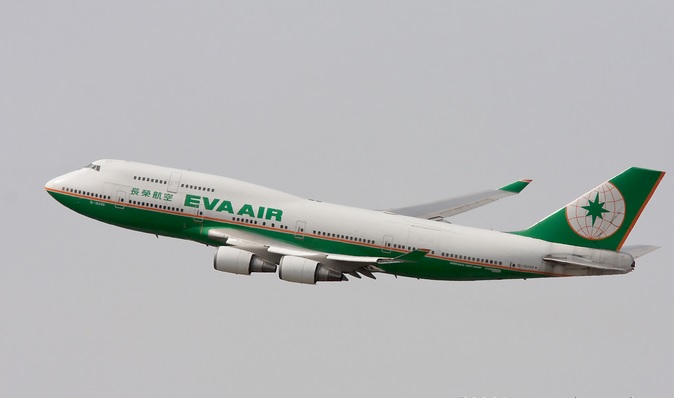 Since its founding in 1989 as an affiliate of shipping conglomerate Evergreen Group,[6] EVA Air has expanded to include air cargo, airline catering, ground handling, and aviation engineering services.[4] Its cargo arm, EVA Air Cargo, links with the Evergreen worldwide shipping network on sea and land.[5] Its domestic and regional subsidiary, UNI Air, operates a medium and short-haul network to destinations in Taiwan, China, and Macau, with its main hub in Kaohsiung, Taiwan.[5] As of January 2015, EVA Air is the 3rd safest airline in the world, with no hull losses, accidents, or fatalities since its establishment.

EVA Air operates a mixed fleet of Airbus, Boeing, and McDonnell Douglas aircraft, with Airbus A330, Boeing 747, Airbus A321, MD 90, and Boeing 777 airliners primarily used on passenger routes, along with Boeing 747 and MD-11 freighters used on cargo routes.[5] The airline was one of the first carriers to introduce the Premium Economy class (called Elite class in EVA Air), which it debuted in 1991.[5] Elite class is onboard Boeing 777 and selected Boeing 747 aircraft.

In November 2014, EVA Air annnounced they would start passenger service to Houston in 2015, and Chicago in 2016.

Upon recipient of regulatory approval, EVA Airways Corporation was formally established in March 1989.[7] The airline was originally to be called Evergreen Airways,[8] however this was deemed too similar to the unrelated Evergreen International cargo airline.[9] In October 1989, the newly formed EVA Airways Corporation placed a US$3.6 billion order for 26 aircraft from Boeing and McDonnell Douglas, including Boeing 747-400 and MD-11 airliners.[8]

Operations began on 1 July 1991 with a small fleet of EVA Air Boeing 767-300ER aircraft featuring business and economy class seating.[9][10] Initial destinations from Taipei were Bangkok, Seoul, Jakarta, Singapore, and Kuala Lumpur.[9] By the end of the year, the EVA Air network had expanded to include additional cities in East Asia and its first European destination, Vienna.[9] First year revenues reached US$40 million.[9]

Expansion in the 1990s[edit]
In 1992, EVA Air received the first of its Boeing 747-400 aircraft on order, and launched its premium economy class, "Economy Deluxe", on its 747 transpacific flights to Los Angeles, beginning in December of that year.[5][9] EVA Air's premium economy cabin, one of the first in the airline industry,[9] featured a wider 2-4-2 abreast configuration,[5] legrests, individual seatback video, and enhanced meal services. EVA Air's Economy Deluxe cabin (later renamed "Evergreen Deluxe" and "Elite Class") proved popular with the traveling public.[5][11] For international services, EVA Air's 747s were configured with 104 premium economy seats as part of a 370-seat, four-class cabin, in addition to first, business and economy classes.[9] In 1993, EVA Air added flights to Seattle, New York, Bangkok and Vienna with the Boeing 747-400.[5]

Aircraft in flight. Side view of quad-engine jet with extended landing gear and flaps.
EVA Air Boeing 747-400 in original livery (1991–2003)
By 1994, EVA Air was providing regular service to 22 destinations worldwide, and carrying over 3 million passengers annually.[9] In 1995, the airline posted its first profit on revenues of US$1.05 billion, one year ahead of schedule.[5][6][9] Internationally, EVA Air's rapid expansion and increased passenger volume was boosted by its safety record, in contrast to its primary competitor, China Airlines.[5][12] In addition to receiving IOSA (IATA Operational Safety Audit) certification,[13] EVA Air in 1997 achieved simultaneous official ISO 9002 certification in the areas of Passenger, Cargo, and Maintenance Services.[14]

Maturation in the early 2000s[edit]
In 2000, EVA Air embarked on its first major long-haul fleet renewal. The airline became one of the launch customers for the Boeing 777-300ER, ordering four aircraft plus eight options.[5] At the same time, the airline placed three orders for the Boeing 777-200LR. In January 2001, EVA Air ordered its first Airbus aircraft, the A330-200. The Boeing 777 aircraft were intended for United States and European services, while the Airbus A330 aircraft were intended for regional Asian routes.[5]

In 2004, EVA Air converted its remaining eight options for Boeing 777-300ERs into firm orders.[15] The first Boeing 777-300ER entered service as EVA Air's new flagship aircraft in July 2005. With the arrival of its new Boeing 777s, EVA Air launched a comprehensive revamp of its cabins, introducing lie-flat seats in its new Premium Laurel business class cabin, and upgrading its premium economy product to the new Elite Class cabin.[16] The airline's A330s were introduced with two-class Premium Laurel and Economy cabins. In December 2005, EVA Air and its associated divisions had 5,098 employees, and the airline's network spanned 40 passenger destinations worldwide, with additional cargo destinations.[4]

Repositioning in the late 2000s[edit]
In 2007, EVA Air announced a nonstop Taipei to New York (Newark) service, to be operated with its new long-range Boeing 777-300ERs.[17] At the same time, the airline withdrew passenger service from Taipei to Paris.[18] On 31 October 2008, EVA Air announced a resumption of Taipei to Paris service with thrice-weekly passenger flights beginning 21 January 2009.[19] In 2008, the airline also announced the suspension of services to Auckland.[20] The carrier also prepared to increase direct flights to China,[21] after initiating weekly charter flights in July 2008 following changes to the Three Links travel agreements.

Side view of aircraft in flight; fuselage painted with cartoon faces and reads 'Hello Kitty'.
EVA Air Airbus A330-200 in "Hello Kitty" livery
For the 2007–2008 period, EVA Air coped with a 34% surge in fuel prices, which contributed to a US$61.2 million 2007 loss.[22] In August 2008, EVA Air reported a second quarterly loss due to increased fuel costs.[23] In response, the airline implemented cost-saving measures, including flight schedule reductions and fee increases.[21] In early 2008, EVA Air's business office in El Segundo, California, announced a major staff reduction, with over half the staff advised that they would no longer be employed by May 2008.[24] Functions performed by those local staff were shifted to Taiwan by half, such as the reservation center.

Recent developments[edit]
In 2010, EVA Air released a newsflash about their service to Toronto, which began on 29 March 2010. In November 2010, EVA Air began nonstop flights connecting the inner-city Taipei Songshan and Tokyo Haneda airports.[27] In 2010, Chang Kuo-wei, son of Chang Yung-fa, returned to serve as EVA Air's president, and the carrier recorded increased sales and yearly profits.[28] In early 2011, the carrier announced that it had applied for airline alliance membership with Star Alliance,[29] and later that year clarified that it was in talks to join either Oneworld or Star Alliance by 2013.[30] In June 2011, the carrier began nonstop flights from Taipei to Guam,[31] and in October 2011 the carrier announced nonstop service from New York (JFK) to Taipei.[32]

On 27 March 2012, EVA Air announced that it would join Star Alliance in 2013.[1] On 24 September 2012 EVA Air signed a partnership with Amadeus IT Group Altéa suite for its Altéa Revenue Management system.

Multi-storey rectangular building with title Evergreen Aviation Technologies Corp.
EVA Air technical facilities at Taiwan Taoyuan International Airport
Cultural details[edit]
EVA Air has differentiated its onboard service by using Taiwanese (Hokkien), Mandarin, Hakka, English, and other languages for its in-flight cabin announcements.[11] The order of Hokkien and Mandarin has varied since the carrier's launch. EVA Air has also used Taiwanese folk songs in its boarding music, including an orchestral form of "Longing for Spring Wind" performed by the Evergreen Group's Evergreen Symphony Orchestra.[11] The carrier's aircraft and employee color scheme has at times been interpreted by observers as support for the Pan-Green Coalition of Taiwanese politics,[38] mainly due to Evergreen founder Chang Yung-fa's political views in the 2000 presidential election,[38][39] but this association changed following Chang's support of the Pan-Blue Coalition in the 2004 presidential election.[39] The carrier has further abstained from displaying official markings of Taiwan on its aircraft, and received expedited approval of international landing rights as a result.[40]

Branding[edit]
Name and logo[edit]
The name "EVA" was taken from two letters of "Evergreen" and the first letter of "Airways." The name "EVA" is always spelled in capital letters. The airline uses the logo of its parent company, using green with an orange trim.[41]

Livery and uniforms[edit]
Double-deck aircraft in flight, with deployed landing gear.
EVA Air Cargo Boeing 747-400BDSF in 2002–present livery
The standard EVA Air livery utilizes dark green, signifying durability,[10] and orange, representing technological innovation.[10] The tail globe logo is intended to represent stability and reliability, and its positioning on the tail, with one corner off the edge, represents service innovation.[10] The EVA Air livery was updated in 2002, adding a larger typeface and the use of green covering the aircraft below the window line. The tail design and logo remained unchanged.

Marketing slogans[edit]
EVA Air has used different slogans throughout its operational history. The first slogan appeared on English advertising in the United States,[43] while the 1996 and 2003 versions were introduced internationally in both English and Mandarin. In 2005, a second "Sharing the world" slogan was introduced to complement the arrival of the airline's Boeing 777s.[44] EVA Air slogans have been as follows:

"Fly EVA Air and Feel the Difference"[43] (1991 launch)
"The Wings of Taiwan"[43] (1996–2002)
"Just relax, your home in the air"[45] (2003–2005)
"Sharing the world, flying together"[44] (2005–present)
Divisions[edit]
EVA Air Cargo[edit]
Side view of tri-jet aircraft in flight, with deployed landing gear.
EVA Air Cargo McDonnell Douglas MD-11F
Founded concurrently with the passenger operations of EVA Air, EVA Air Cargo operates facilities in Europe, Asia, and North America. Its cargo operations have diversified to include transportation of high-tech equipment and special care items such as museum artwork[46] and live zoological specimens.[47] EVA Air has stated its goal of achieving a 50/50 split in revenues between its passenger and cargo operations.[5] The airline's cargo operations are mainly operated via a fleet of Boeing 747-400,[48] MD-11 dedicated freighters, Boeing 747-400 Combi aircraft, and additional belly cargo space on passenger aircraft.[5]

Following the establishment of its A330 fleet and the introduction of Boeing 777 long-haul aircraft, the airline converted some of its older Boeing 747-400 passenger aircraft to freighters to meet cargo market demands.[49] EVA Air Cargo established its European Cargo Center in Brussels in 2003[50] and opened its Southern China Cargo Center in Hong Kong in 2006.[51]

As of 2007, EVA Air Cargo has 43 weekly cargo flights to London, Vienna, Brussels and US destinations including Los Angeles, Dallas/Ft. Worth, Chicago, Atlanta and New York. The carrier also has code-shares with international airlines including Air Nippon (a subsidiary of All Nippon Airways), British Airways World Cargo, Austrian Airlines and Lufthansa Cargo.[52]

Through the mid-2000s, EVA Air's route network was affected by the political status of Taiwan, which has historically limited access for Taiwanese airlines to Europe and certain Asian countries.[5] Because Taiwanese carriers did not have direct access to China, EVA Air has used Hong Kong and Macau as interline destinations.[49] EVA Air operated regular charter flights to China in 2008. The airline began regularly scheduled, direct cross-strait operations in December 2008, following the restoration of direct travel links.[57]

Eva air currently plans to expand its North America network. Houston route will open in June 2015, while Chicago route will be open around 2016. Atlanta and Dallas route will soon be added to the network after 2016.