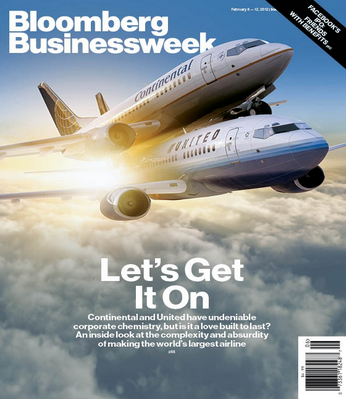 In February 2008, UAL Corporation and Continental Airlines began advanced stages of merger talks and were expected to announce their decision in the immediate aftermath of a definitive merger agreement between rival Delta Air Lines and Northwest Airlines.[60] The timing of the events was notable because Northwest's golden shares in Continental (that gave Northwest veto authority against any merger involving Continental) could be redeemed, freeing Continental to pursue a marriage with United. On April 27, 2008, Continental broke off merger negotiations with United and stated it was going to stand alone. Despite ending merger talks, Continental announced that it will join United in the Star Alliance.

United and US Airways were in advanced merger talks in late April 2008, following the announcement that Continental had broken off talks with United. In June 2008, CEOs of both United Airlines and Continental Airlines signed an alliance pact that led to their eventual merger. The alliance was an agreement to link international networks and share technology and passenger perks. This agreement was basically a "virtual merger" that included many of the benefits of a merger without the actual costs and restructuring involved. The alliance took effect about a year after Delta Air Lines and Northwest Airlines completed their merger, as that released Continental from the SkyTeam contract and allowed for the required nine-month notice. Additionally, Continental joined the Star Alliance, as Delta and Northwest merged.

United Airlines was reported to be in serious merger discussion with US Airways in early April 2010. A New York Times report indicated that a deal was close. Union consent was cited as a major hurdle for negotiators to clear. On April 22, 2010, United announced that it would not pursue a merger with US Airways.
On May 2, 2010, the Boards of Directors at Continental and United Airlines approved a stock-swap deal that would combine them into the world's largest airline in revenue passenger miles. The new airline will take on United Airlines name, Continental's logo and be based in United's hometown of Chicago. The new United is being run by Continental's CEO, Jeffery Smisek, along with United Airline's CEO, Glenn Tilton, serving as non-executive Chairman of the board. The deal received approval from US and European regulators in the summer of 2010. The shareholders of both airlines approved the deal on September 17, 2010. Both airlines had been reporting losses in the recession and expected the merger to generate savings of more than $1 billion a year.
In June 2010, Continental announced that it would begin offering nonstop flights from its hub in Houston to Auckland, New Zealand beginning November 16, 2011, subject to government approval. Flights from Houston to Auckland were to be flown using Boeing 787 Dreamliner aircraft which had been expected to be delivered in August 2011. However, due to an additional delay of the Boeing 787 Dreamliner aircraft, Continental decided to postpone the service until 2012. (United subsequently scrapped the plans.)

On June 14, 2010, Continental announced that it would launch nonstop flights from its hub in Houston to Lagos, Nigeria beginning November 10, 2011 subject to government approval. Flights were to be originally be flown on Boeing 787 Dreamliner aircraft. Due to an additional delay in delivery of the 787, Continental ended up launching Houston-Lagos flights with Boeing 777-200ER aircraft instead.
In July 2010 the Continental-United merger was approved by the European Union. In August, Continental and United Airlines revealed a new logo that was used after the merger was complete. On August 27, 2010, the US Justice Department approved the Continental-United Merger. This is partially because United and Continental agreed to lease 18 take-off and 18 landing slots at Newark Liberty International Airport to Southwest Airlines. On September 17, 2010, Continental shareholders approved the merger deal with United Airlines. Both carriers planned to begin merging operations in 2011 to form the world's biggest carrier and was expected to receive a single operating certificate by 2012. Continental's air operator's certificate (AOC) was retained, while those of United and Continental Micronesia were surrendered. On the other hand, United's maintenance certificate remained while Continental's did not.

On October 1, 2010, UAL Corporation completed its acquisition of Continental Airlines and changed its name to United Continental Holdings, Inc. Although the two airlines remained separate until the operational integration was completed by mid-2012, as of that day both airlines were corporately controlled by the same leadership. On December 22, 2010, Continental Airlines merged operating certificates with Continental Micronesia. All Continental Micronesia flights were then branded and operated by Continental Airlines. On August 27, 2010, US regulators approved the planned merger. UAL and Continental shareholders gave their consent to the deal on September 17, 2010. The transaction is expected to close by October 1, 2010. Both carriers began merging its operations in 2011. On February 17 of that year, United Continental Holdings announced that Economy Plus will be part of the new United Airlines. On March 22, UCH announced that they had plans to offer Wi-Fi Service on more than 200 domestic Boeing 737 and 757 aircraft. The airlines attained a single operating certificate from the FAA on November 30, 2011. That day, all Continental Airlines flights began to use the "United" callsign during air traffic control communications. This marked the end of Continental Airlines.

There has been some public negative reaction to the new United livery among United employees and frequent flyers and fans, with petitions on social networking sites such as Facebook and Twitter to save the pre-merger United Saul Bass logo and livery. Management may have taken note of this negative reaction when it changed the font of the new livery to the current all-caps san serif font closer to the latest United Airlines font, from the originally proposed title caps serifed font similar to the latest Continental font, though management has never publicly provided a reason for this change. A Boeing 777–200 with tail number N794UA was the last aircraft to receive United's blue and white livery.

The new United is the second largest airline in terms of fleet size, while Delta Air Lines remains the largest. The combined airline houses a fleet of over 700 aircraft, surpassing American Airlines' 621. There are also 118 aircraft on order, 50 from United, and 68 from Continental. The combined fleet features a mixture of Airbus and Boeing aircraft: Airbus A319s, Airbus A320s, Boeing 737s, Boeing 747s, Boeing 757s, Boeing 767s, Boeing 777s, and Boeing 787 Dreamliners with orders of Airbus A350s.
At the time of the merger with United, Continental was the fourth-largest airline in the US based on passenger-kilometers flown and the fifth largest in total passengers carried. Continental operated flights to destinations throughout the U.S., Canada, Latin America, Europe, and the Asia-Pacific regions. Principal operations were from its four hubs at Newark Liberty International Airport, George Bush Intercontinental Airport (Houston), Cleveland Hopkins International Airport and Antonio B. Won Pat International Airport in Guam. The only Continental hubs to be rebranded are Cleveland Hopkins International Airport and Houston's George Bush Intercontinental Airport. The Newark hub began the rebranding process on October 19, 2011 with all United-operated ticket counters and gates to be rebranded in Phase One; Phase Two of rebranding at Newark began in 2012 with Continental ticket counters and gates to be rebranded. On November 30, 2011, Continental officially merged with United and no longer operates as a separate airline.
Though the single operating certificate was acquired and all flights use the United callsign, some Continental Airlines flights continued into 2012. On March 3, 2012, Continental's passenger reservation system and frequent flyer program was merged into United. The last Continental Airlines flight taking off was "Continental Flight 1267", flying from Phoenix to Cleveland, and arriving into Cleveland as "United Flight 1267".