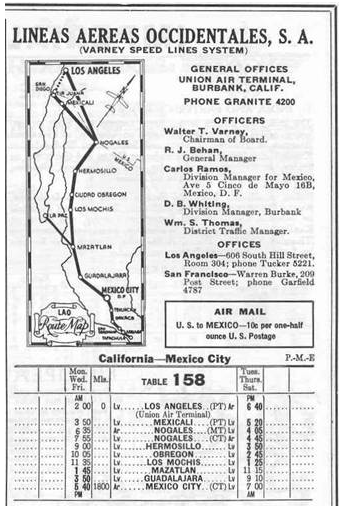 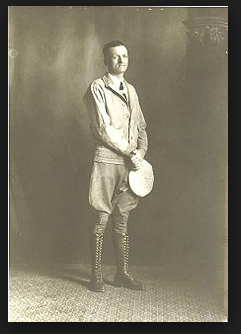 Varney Speed Lines (named after one of its initial owners, Walter T. Varney, who was also a founder of United Airlines) was formed in 1934, operating airmail and passenger services in the American Southwest over a route originating from El Paso and extending through Albuquerque, Santa Fe, and Las Vegas, NM to Pueblo, CO. The airline commenced operations with the Lockheed Vega, a single-engine plane that carried four passengers. The airline later flew other Lockheed planes, including the Lockheed Model 9 Orion, the Lockheed Electra Junior, and the Lockheed Lodestar.[5][page needed] Following cancellation of all domestic airmail contracts by the Roosevelt administration in 1934, Robert F. Six learned of an opportunity to buy into the Southwest Division of Varney Speed Lines which needed money to handle its newly won Pueblo-El Paso route. Six was introduced to Louis Mueller (who would serve as Chairman of the Board of Continental until February 28, 1966). Mueller had helped found the Southwest Division of Varney in 1934 with Walter T. Varney. As an upshot of all this, Six bought into the airline with US$90,000 and became general manager on July 5, 1936. Varney was awarded a 17-cent-rate airmail contract between Pueblo and El Paso; it carried   passengers as a sideline. The carrier was renamed Continental Air Lines (later changed to "Airlines") on July 8, 1937. Six relocated the airline's headquarters to Denver Union (later Stapleton) Airport in Denver in October 1937. Six changed the name to "Continental" because he wanted the airline name to reflect his desire to have the airline fly all directions throughout the United States.

During World War II Continental's Denver maintenance base converted B-17s, B-29s and P-51s for the United States Army Air Forces. Profits from military transportation and aircraft conversion enabled Continental to contemplate expansion and acquisition of new airliners after the war. Among those were the DC-3, the Convair 240 and the Convair 340. Some DC-3s were acquired as military surplus after World War II. The Convairs were Continental's first pressurized airliners. The airline's early route was El Paso to Denver, with routes being added during the war from Denver and Albuquerque across Kansas, Oklahoma, and Texas. In 1946 Continental flew Denver to Kansas City, Tulsa, and to Oklahoma City, and from El Paso and Albuquerque to San Antonio. Each route included stops in several of 22 smaller cities.

In 1953 Continental merged with Pioneer Airlines, gaining access to 16 more cities in Texas and New Mexico. In August 1953, before the merger, Continental flew to 35 airports and Pioneer flew to 19, but Continental's network didn't reach beyond Denver, El Paso, Houston and Kansas City until April 1957 when DC-7B flights reached Los Angeles and Chicago.

Bob Six petitioned the Civil Aeronautics Board (CAB) for longer routes to larger cities, hoping to transform the regional into a trunkline like United, TWA, and American. He was quietly discussing with Boeing for Continental to become one of the first to operate the soon-to-be-launched 707. The timing was crucial, since new routes would justify the 707s, and vice versa.