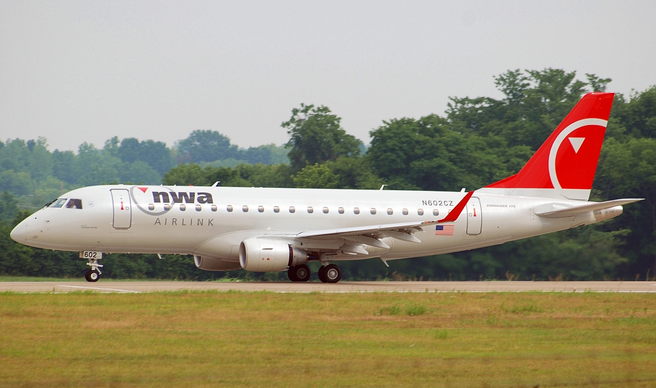 Compass Airlines, LLC is a regional airline headquartered in Delta Air Lines Building C at Minneapolis−Saint Paul International Airport in Fort Snelling, Hennepin County, Minnesota; prior to December 16, 2009, it was headquartered in unincorporated Fairfax County, Virginia, United States, east of the Chantilly CDP. The airline launched inaugural service with a single Bombardier CRJ200LR aircraft under the Northwest Airlink (now Delta Connection) brand between Minneapolis/St. Paul and Washington, D.C. on May 2, 2007. On August 21, 2007, it began flying two Embraer 175 76-passenger aircraft, and expanded to 36 aircraft by December 2008.

In July 2010, the airline was purchased from Delta Air Lines and became a wholly owned subsidiary of Trans States Holdings.

In order to adapt to the agreement, and fulfill a need to serve the regional markets with smaller, more efficient aircraft and a dramatically reduced wage labor force, Northwest bought the operating certificate of bankrupt Independence Air on March 10th, 2006 for $2 million. During the concept phase, the subsidiary was known as "NewCo". Compass' operations are limited to 76-seat aircraft or less, due to the language in the pilot contract at the mainline carrier.

On July 1, 2010, Delta Air Lines announced that it sold Compass Airlines to Trans States Holdings for US$20.5 million. Despite the change in ownership, Compass still shares many things with their former parents, including the pre-merger Northwest online crew scheduling software RADAR, headquarters in a Delta-owned building, and a logo that is a modified version of the final Northwest Airlines logo.

Embraer E-175LR — 20 12 20 44 76 To be operated as American Eagle. 20 aircraft to be leased from American Airlines Group from an order for 60 aircraft and 90 options. Compass also holds rights to operate the other 40 aircraft for American Eagle. Deliveries begin March 2015.

All Compass Airlines aircraft are currently operated as Delta Connection. As of Q1 2015, Compass will also begin flying for American Eagle.

This section needs additional citations for verification. Please help improve this article by adding citations to reliable sources. Unsourced material may be challenged and removed. (April 2013)
Both the Pilot and Flight Attendant groups are unionized, with the Pilots being represented by the Air Line Pilots Association, and the Flight Attendants represented by the Association of Flight Attendants (AFA-CWA). The pilots are covered by a collective bargaining agreement negotiated at the time the airline was created in 2007. The flight attendants elected AFA on November 18, 2009, by a two-to-one margin.

The flight attendants negotiated and approved a five-year contract with the company on May 1, 2013, following a failed vote on a tentative agreement in late 2011.  The new contract gave employees pay increases, a larger 401(k) match, a signing bonus, and other working condition improvements.

On August 25, 2010, Compass Airlines fired a flight attendant after she appeared on a local television program admitting publicly that she qualified for food stamps, even though she was a full-time employee of the airline.