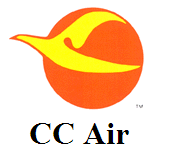 CCAir was created in 1987 when Sunbird Airlines was renamed. Operating as a Piedmont Commuter / USAir Express code-sharing partner, its radio call sign was "Carolina". The CC stood for Carolina Commuter. Most of the employees were local people who were extremely loyal to the company.

CCAir (beginning as predecessor Sunbird Airlines) had experienced a tremendous period of growth in the years 1985-1987. With the Piedmont/USAir merger, the company experienced a tremendous change in the compensation arrangements with their senior partner. These problems eventually led to the company filing bankruptcy in order to protect themselves from creditors. Former CEO Ken Gann, was responsible for turning around the airline and restructuring it. CCAir was the first commuter airline to ever enter Chapter 11 bankruptcy and emerge profitable.

CCAir Began with a fleet of Cessna 402 Businessliner piston-engined aircraft, Beech 99 Airliners and Shorts 330 Skyvans. After the changeover to CCAIR the Cessna were retired and the Shorts 330's were replaced by the new Shorts 360 . CCAir also acquired the BAE Jetstream 32, a pressurized aircraft which proved a poor choice as most flights were operated under 10,000 feet and maintenance costs were high.In the mid 90's code-sharing partner USAir directed CCAir to begin the acquisition of DeHavilland Canada Dash 8 aircraft.

In 1999, Mesa Air Group acquired CCAIR. Under Mesa CEO Jonathan Ornstein, CCAIR and Mesa were operated as separate airlines. Some CCAIR Gate/Ticket agents and Ground handlers attempted to unionize, but the vote was narrowly against representation. Mr. Ornstein promised to work with ground personnel, but shortly thereafter canceled the ground handling service with US Airways Express. Also several cities in North Carolina, Hickory, Southern Pines/Pinehurst, Kinston and Rocky Mount, NC lost their air service, which was flown by CCAIR. The CCAIR pilots resisted many offers to take paycuts and deep concessions to have the chance for growth and flying Regional Jets.

Mr. Ornstein slowly started making changes to CCAIR. First the high-maintenance Jetstream 32's were grounded and Mesa's Beech 1900s were brought in to replace the Jetstreams. Finally, in 2002, a deep concessionary agreement was proposed to the CCAIR pilots. When voted upon and ratified, ALPA (Airline Pilots Association) President, Duane Woerth promised the CCAIR pilots he would sign off on the agreement, but reneged when he felt the agreement was too concessionary in nature. A few pilots attempted to sue ALPA in federal court in Charlotte, but US District Court Judge Graham Muellen upheld ALPA's decision not to allow the new Collective Bargaining Agreement to take effect. On November 4, 2002, CCAIR ceased operations.[citation needed] Most CCAir pilots found employment with Mesa and Mesa's collective bargaining agreement in their respective operations.