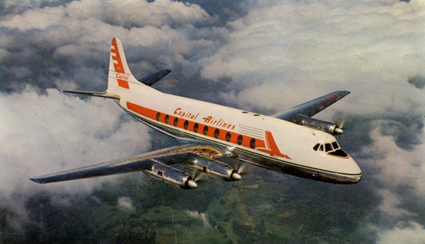 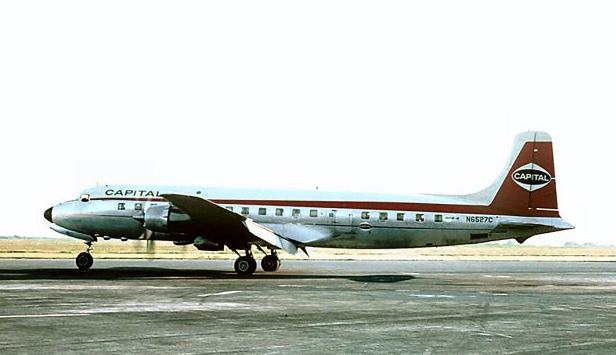 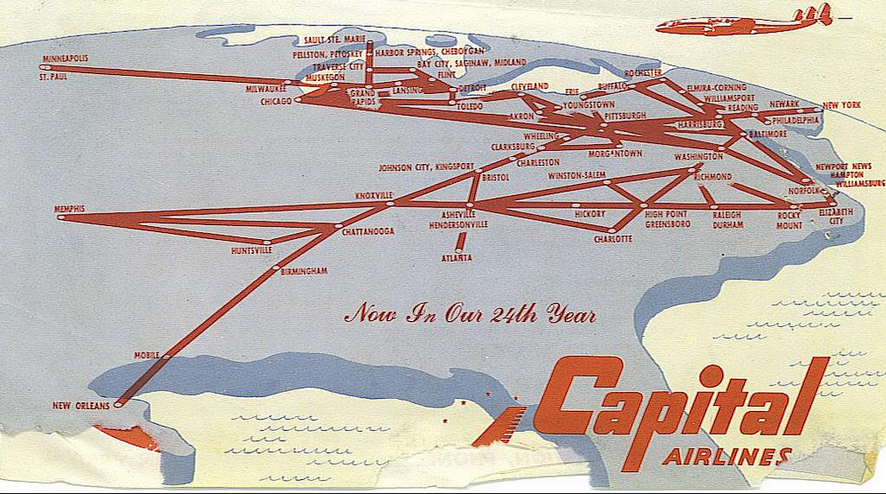 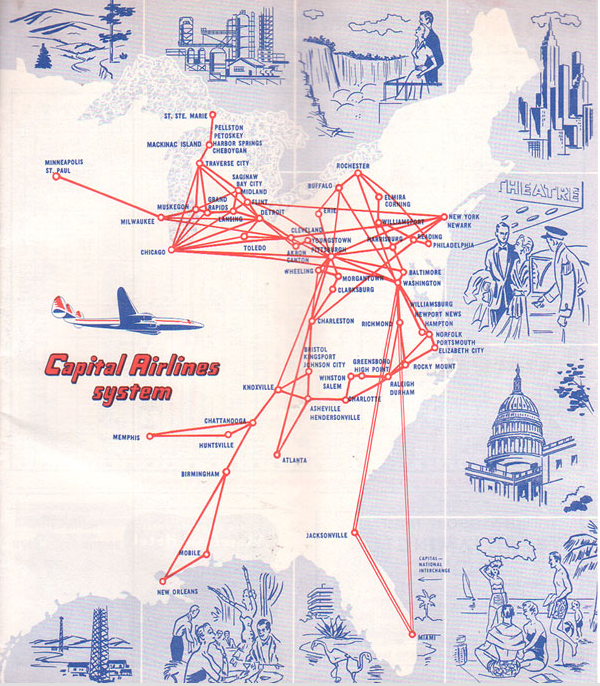 Capital Airlines was an airline serving the eastern United States that merged into United Airlines in 1961. Their primary hubs were National Airport near Washington, D.C., and Pittsburgh. In the 1950s they were the largest US domestic carrier by passenger count (and sometimes by passenger-miles) after the Big Four (American, United, TWA, and Eastern). Their headquarters was in Washington, D.C.

Predecessors
Clifford A. Ball, a McKeesport, Pennsylvania, automobile dealer and owner of a controlling interest in Bettis Field near Pittsburgh, won airmail contract route No. 11 on March 27, 1926. In April of the following year, The Clifford Ball Airline began operating between Pittsburgh and Cleveland, Ohio. Famed humorist and performer Will Rogers was known to be an early and regular passenger,[2] but scheduled passenger service did not begin until April 28, 1928. The following August, they became the first airline to serve Washington, DC, from the west, offering their flagship "Path of the Eagle" service from Cleveland to Hoover Field across the Potomac River.

Ball sold his interests in November 1930 to Pittsburgh Aviation Industries Corp., and the airline became Pennsylvania Air Lines (PAL). PAL was reorganized as Pennsylvania Airlines after the Air Mail scandal of the early 1930s. Central Airlines, otherwise notable for hiring Helen Richey, the first female commercial pilot in the U.S., became PAL's main competitor after their founding in 1934. The two companies merged to form Pennsylvania Central Airlines, or PCA, on November 1, 1936.

DC-3 of Pennsylvania Central Airlines
PCA, based at the new Allegheny County Airport near Pittsburgh, continued to add routes, notably to Chicago in 1938, and aircraft, notably the Douglas DC-3 in 1939.

In 1941 PCA moved their headquarters to the new Washington National Airport in Arlington, Virginia, becoming one of its three original tenants; PCA had been consulted during the airport's design. The row of office buildings next to its hangars became "mahogany row" and the airline adopted the slogan "The Capital Airline," with its aircraft dubbed "Capitaliners." By 1947 their route network no longer reflected their name, and on April 21, 1948, the airline adopted a new insignia, colors and name: Capital Airlines.

In 1946 PCA began flying the Douglas DC-4. In 1948 they created the "Nighthawk," one of the first coach class services, to compete with the railroads between Chicago and New York City and the dominant airlines on the route, United, TWA and American.[citation needed] Each flight left at 1 AM and stopped for ten minutes at Pittsburgh (Allegheny County). Chicago-NY fare was $29.60 plus 15% federal tax; seats on all other flights cost $44.10 plus tax.

Capital's last decade
In 1948 the first airborne television was installed on a Capital airplane.

In 1950 Capital Airlines received their first Lockheed Constellations. In 1955 they became the first U.S. operator of Vickers Viscounts, the first passenger turboprop. The Viscounts were deployed on the flagship Washington-Chicago route and the airline hoped to use them on expanded service, but they were mostly stymied by the Civil Aeronautics Board.

On July 20, 1952 a Capital pilot reported seeing a blue-white ball in the sky. This was one of a series of sightings that month known as the 1952 Washington D.C. UFO incident.

The airline also encountered labor difficulties. Maintenance personnel went on strike in 1958, crippling operations for 38 days. On April 1, 1960, the New York State Commission Against Discrimination faulted Capital Airlines for failing to hire Patricia Banks, an African-American woman who had been denied employment as a flight attendant despite meeting all job requirements. She became one of only two black flight attendants in the country.

These problems compounded slow revenue growth in the late 1950s, and the airline began to struggle financially. In May 1960 Vickers foreclosed on Capital's entire fleet of Viscounts, and bankruptcy for the airline seemed certain. However, on July 28, 1960, they announced a merger with Chicago-based rival United Airlines, saving them from that fate. When completed on June 1, 1961, it was the largest airline merger in history.[4] United continued to operate the British-built Viscounts that had been flown by Capital. In 1961 Capital had begun operating new Boeing 720s owned by United. The cover of the airline's June 1, 1961 timetable proclaimed: New Boeing 720 Jets New York - Atlanta - New Orleans: 2 Round Trips Daily.

In 1981 former employees formed the Capital Airlines Association to preserve their memories of the old carrier. A retired United Airlines pilot, Milt Marshall, bought the Capital trademark and operated a charter business under the Capital name out of Waterbury-Oxford Airport in Connecticut.

In a bizarre final chapter to the brand's story, in July 2004 Capt. Marshall was transporting a passenger in a Capital Airways Piper PA-31 Navajo from Waterbury to upstate New York. The plane crashed as it made an approach in clear weather near Lake George. Both pilot and passenger were killed. Their bodies were mangled and burned in the wreckage. A pistol magazine with two missing rounds was found at the crash scene but no gun was ever found. Many people believe that the passenger, a businessman who was facing both bankruptcy and indictment for fraud and who had attempted to buy a large life insurance policy just prior to the flight, killed the pilot and himself causing the crash. The bodies were so mutilated that no official cause of death was determined and the case was closed. This marked the last chapter in the tragedy strewn history of Capital Airlines