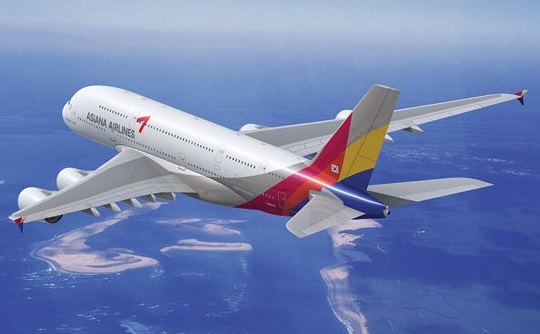 Asiana Airlines Inc. (Hangul: 아시아나 항공; RR: Asiana Hanggong; KRX: 020560; formerly Seoul Airlines) is one of South Korea's two major airlines, along with Korean Air. Asiana has its headquarters in Asiana Town building in Seoul.[2] The airline has its domestic hub at Gimpo International Airport and its international hub at Incheon International Airport (70 kilometres (43 mi) from central Seoul). As a member of Star Alliance, it operates 14 domestic and 90 international passenger routes, and 27 cargo routes throughout Asia, Europe, North America, and Oceania.[3] As of December 2014, the company employs 10,183 people. The majority of Asiana's pilots, ground staff, and flight attendants are based in Seoul. Asiana Airlines is the largest shareholder in Air Busan, a low-cost regional carrier joint venture with Busan Metropolitan City. Asiana is also currently an official sponsor of the South Korea national football team and The Presidents Cup 2015.

Founding
Korean Air (associated with the Hanjin Group), which was privatized in 1969, had a monopoly on the South Korean airline industry until the establishment of Asiana in 1988.[4] Asiana's formation did not come about as a policy initiative favoring liberalized market conditions but rather because of pressure from other chaebols and interests who wanted to compete.[5] It was formed by the Kumho Asiana Group (formerly Kumho Group) and was originally known as Seoul Air International. Asiana was established on 17 February 1988 and started operations in December 1988 with flights to Busan. As of 2007 the airline was owned by private investors (30.53%), Kumho Industrial (29.51%), Kumho Petrochemical (15.05%), foreign investors (11.9%), Korea Development Bank (7.18%), and others (5.83%).[6]

Expansion as global carrier and joining Star Alliance[edit]
Asiana Airlines has rapidly expanded since its establishment in 1988 to become a mid-sized, global carrier with a current fleet of 83 aircraft. In December 1998, the airline operated the presidential airplane for the first time.[7] The Airline was listed in KOSDAQ In December 1999. On 28 January 2003, the airline became a full Star Alliance member, expanding its worldwide network and global brand. In 2004, the airline added the Airbus A330 and the Boeing 777-200ER to its fleet, and expanded its routes into mainland China. Currently it provides international services to 71 cities in 23 countries on 91 routes, and domestic services to 12 cities on 14 routes. It also provides international cargo services to 29 cities in 14 countries on 28 routes by Asiana Cargo, the airline's freight division. In 2012, the airline had net sales of US$5.3 billion.[8]

New corporate identity[edit]
In February 2006, Asiana Airlines modernized its corporate identity for unification with those of other divisions of its parent company the Kumho Asiana Group. The names of the travel classes have changed from First Class, Business Class, and Economy Class to First, Business, and Travel classes respectively, and the colors of the travel classes have changed to yellow, blue and red for First, Business, and Travel Class, respectively. New uniforms were also created for the crew.[9]

Future developments[edit]
Since the 2000s, Asiana has focused on long-haul services and fleet modernization. As of December 2013, Asiana operates total 90 (45 round-trip) transpacific passenger flights per week. The airline also plans to increase the size of its fleet from current 83 to 85, with the delivery of the Airbus A380 in May 2014. For safety improvement, further focus will also be made on improving communications between crews.[10]

Notable achievements[edit]
Asiana began to focus on being an environmentally friendly company in the mid-90s and has put its efforts ever since in this regard, such as completely banning in-flight smoking and cigarette sales in 1995.[11] The company was awarded first in class certification by the International Organization for Standardization (ISO) for meeting criteria ISO 14001 in 1996.[11][12] In 2001, Asiana Airlines was recognized for being the "first environmentally friendly company within the service industry" by the Ministry of Environment.[11] Some of Asiana's other environmentally-minded programs include an emissions measurement and reduction system, reducing pollution from ground facilities and partnering with the Rainforest Alliance for coffee served on board.[11]

On 17 February 2009, Air Transport World (ATW) awarded Asiana the "Airline of the Year" award, which is considered to be one of the most honorable awards in the airline industry.[13] and later in May 2010, Asiana Airlines was named the best airline in the world by Skytrax at the 2010 World Airline Awards.[14] Asiana came in second place behind Qatar Airways in 2011 and 2012.

An Asiana Cargo Boeing 747–400BDSF
The airline has its headquarters in Asiana Town (아시아나타운) in Osoe-dong, Gangseo-gu, Seoul.[2] The airline's head office moved from Hoehyeon-dong, Jung District to Asiana Town in Osoe-dong on 1 April 1998.[15]

Destinations[edit]
Further information: Asiana Airlines destinations
Asiana Airlines serves destinations on four continents with a well-developed Asian network that includes important cities in the People's Republic of China, Japan, Southeast Asia and Central Asia. The airline serves a number of gateway cities in North America and Europe while retaining a limited coverage of Oceania. It is the first airline that has developed regular passenger routes between Seoul and Tashkent, Almaty, Siem Reap, Phnom Penh and Koror. Besides regular routes, Asiana also has served a number of seasonal charter routes from Seoul to some tourist attractions such as Brunei, Nha Trang, Qiqihar and Zhangjiajie. Asiana Cargo, the airline's only cargo subsidiary, also has a wide network, especially in Europe and the United States, and currently serves cities that Asiana does not offer regular passenger services to and from. Some of these cities in Europe, include Brussels, Milan, Oslo, and Vienna. Some of these cities in the United States, include Atlanta, Dallas, Miami, and Portland.

In July 2013, Asiana began its regular passenger service to Jakarta and Denpasar, Indonesia. Currently, there are also plans to launch a new passenger route between Seoul and Wuxi.[16] While trying to obtain traffic rights for Korea-Mongolia routes, the airline is also considering more investment in long-haul services, including launching a direct charter route to Barcelona by May 2014.