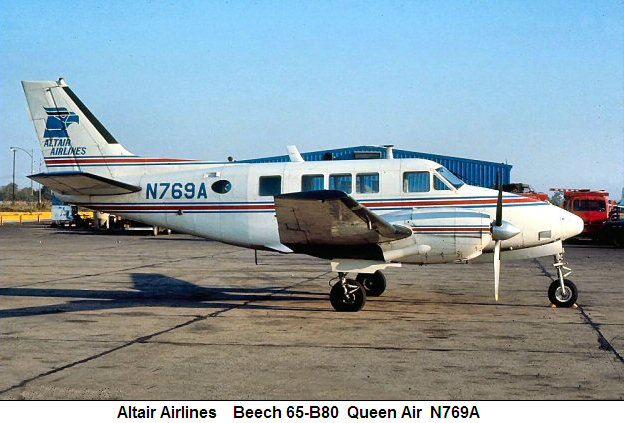 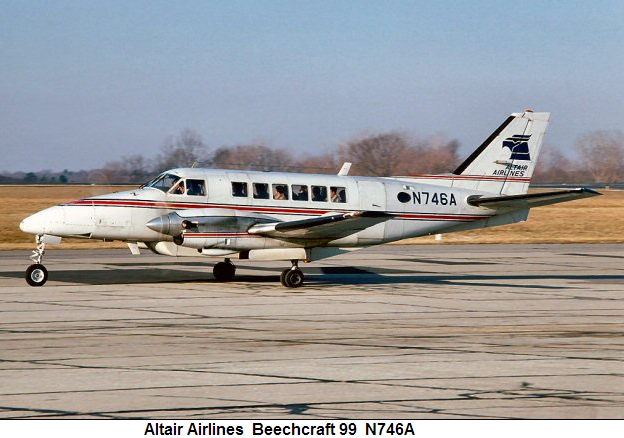 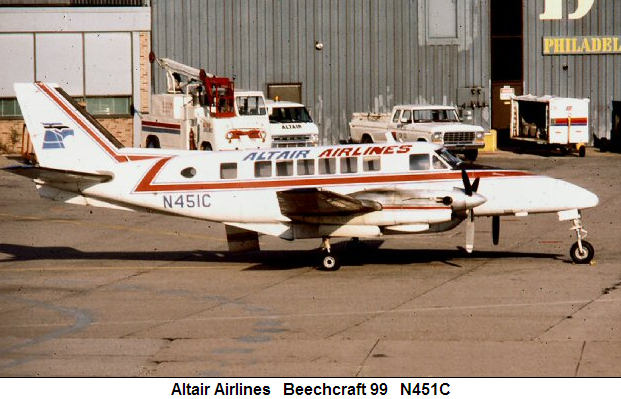 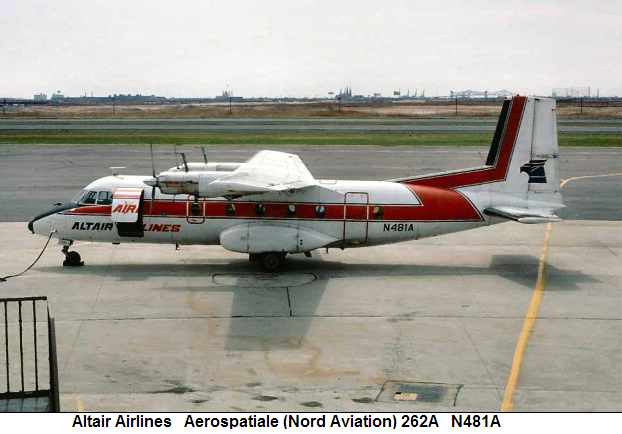 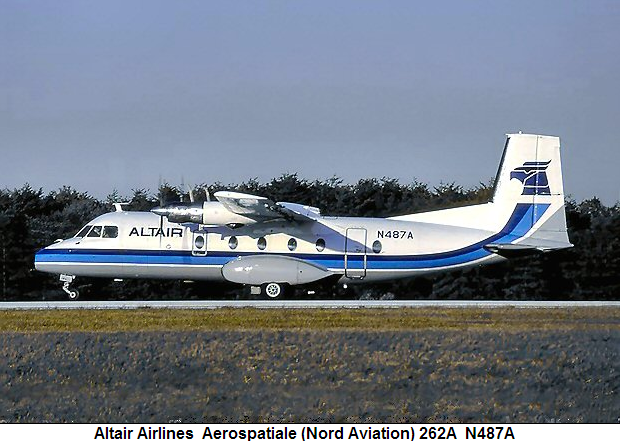 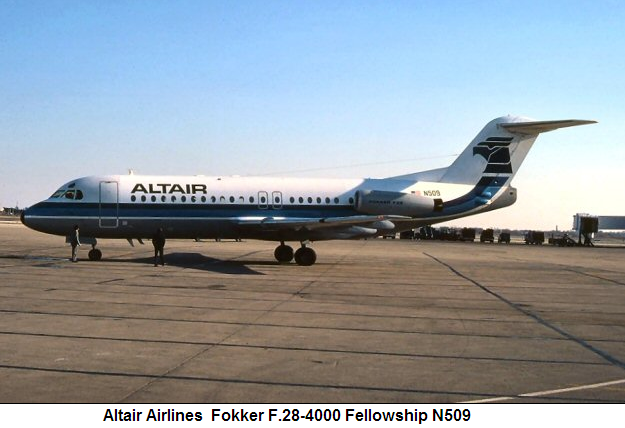 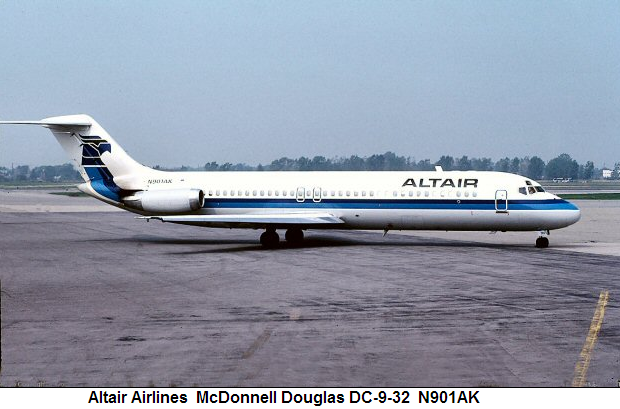 Key people Henry P. Hill
Altair Airlines was an airline based in Philadelphia, Pennsylvania, United States. It was in service from 1967 to 1982.
The airline was established in 1967 as a regional airline. In 1967, Altair's main shareholder was Tristram Colket and it had 587 employees. In May 1970, Altair Airlines was reported by the Civil Aeronautics Board to have the highest bumping rate. Altair attempted to return to profitability by expanding their services to new hubs along the East Coast and by taking on a fleet of DC-9 jets but profits never were able to outpace the debts incurred. In November 1982, Altair owed more than one million dollars in jet fuel costs to Gulf Oil Corporation and, after a protracted period of negotiating, Gulf demanded immediate payment. Altair had little choice but to seek legal protection. In 1982, Altair filed for bankruptcy due to its many debts. Its last president was Henry P. Hill. Many of Altair's dedicated employees found employment at other airlines with facilities at Philadelphia International Airport.

When it ceased operations in November 1982, Altair Airlines had a fleet of six Fokker F28-4000s and three McDonnell Douglas DC9-30s.

Other History Write Up

Altair Airlines began scheduled services in November 1966 on routes from Philadelphia to Scranton,
PA and White Plains, NY, via several intermediate cities. The original modest fleet consisted of
three Queen Airs, one of which is seen above in this rare shot by Bob Polaneczky taken at Philadelphia
Airport in November 1970.
By the early 1970s Altair had expanded its network considerably. Still based in Philadelphia, it
flew to some 15 cities throughout Pennsylvania and upstate New York. The Queen Airs were
augmented with a fleet of five Beech 99s. N746A is seen above at Westchester County Airport
in White Plains, New York, taxiing in after a flight from Philly in January 1979 in this shot by
Howard Chaloner.
A livery change was implemented by Altair in the early 1980s to more readily identify the line.
N451C, seen above at Philadelphia Airport 1981 in this shot by Jay Selman/Airliners Gallery
shows the revised markings. N451C was a new machine which had been purchased directly
from Beech.
In 1976 Altair acquired seven Nord 262s from Cimber Air in Europe (some were Danish registered,
some German). N481A above, seen here in this nice shot by Howard Chaloner at Liberty International
Airport, Newark, NJ in April 1979, was formerly D-CIMB (and OY-BDL, I-SARL before that).
Of the 110 machines of this type built at Bourges, France some 40 or so wound up in service in the
U.S., the most notable customer being Lake Central.
A smart new blue livery was introduced (on some aircraft) by Altair in 1980. Seen above is an
example shot at sunset on a bright winter's day at Baltimore/Washington International (Friendship)
Airport in December 1980, by Bob Garrard. By this time the airline had expanded its route
structure to provide service from Philadelphia and Newark to as far north as Buffalo, NY, and
as far south as Raleigh, Greensboro and Charlotte, NC.
Such was the growth of the Philadelphia-based regional carrier that, in 1980, it ordered a fleet of
ten Dash-400 Fokker F.28 pure jets, new from the manufacturer. N509 was one the first and went
on-line in October of 1980. It is seen above at home base Philadelphia International Airport in
this nice shot by Charlie Carroll taken in November 1980.
Early in 1982 Altair acquired three ex-Air Canada DC-9s. The first was the former C-FTKL, seen
above in this rare shot by Trevor Ogle at the Niagara (Greater Buffalo) International Airport in Sept-
ember of 1982. ...............And then, as quickly as it had all started back in 1966, Altair was gone.
On 9 November 1982 it filed for Chapter 11 bankruptcy. Clearly, the up-and-coming regional air-
line, which by then was serving cities as far afield as Buffalo, Hartford, Providence, Boston, Tampa,
Memphis, Raleigh /Durham and Savannah from its hubs in Philadelphia and Newark had succumbed
to the too rapid expansion syndrome, and this, coupled with under-cutting by de-regulation upstarts
forced it out of business.. For a while the fleet was laid up in Philadelphia, but eventually homes
were found for the bulk of them. The DC-9 above went back to Air Canada the following year.