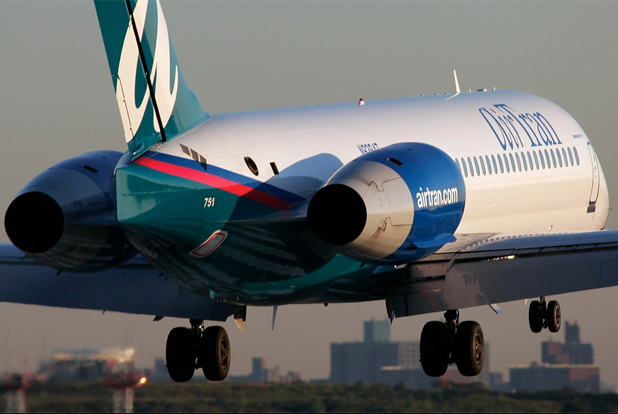 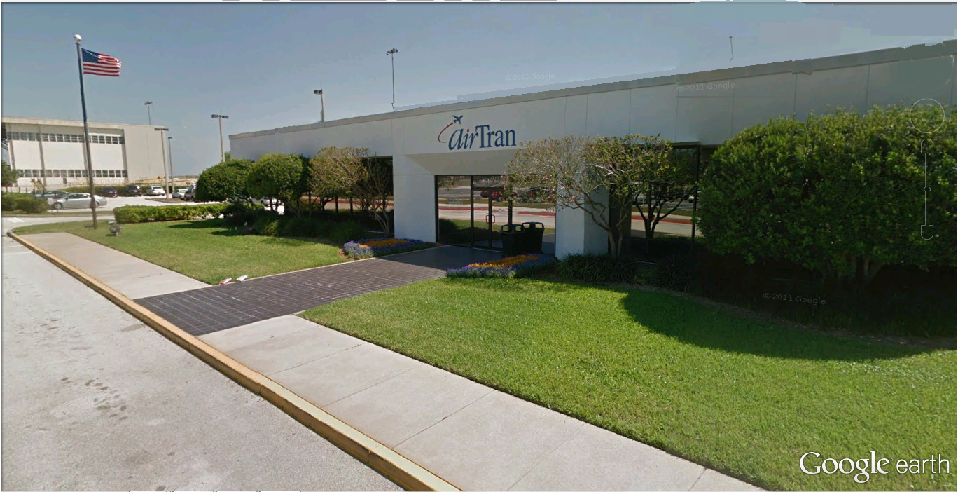 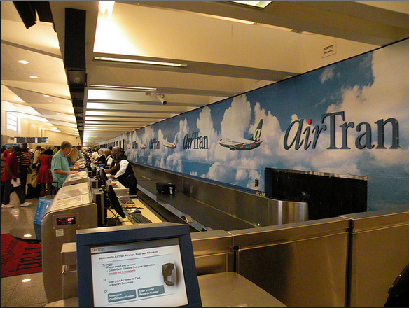 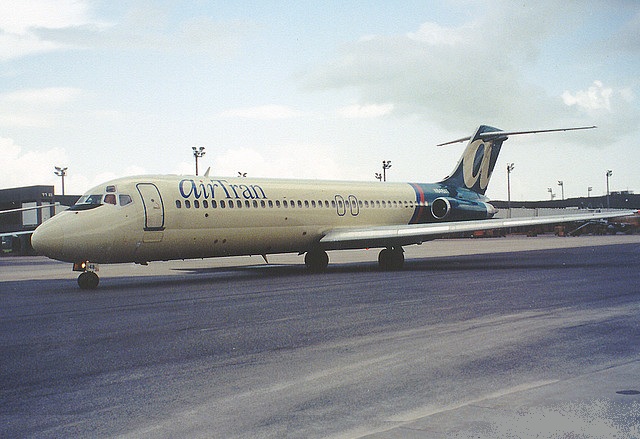 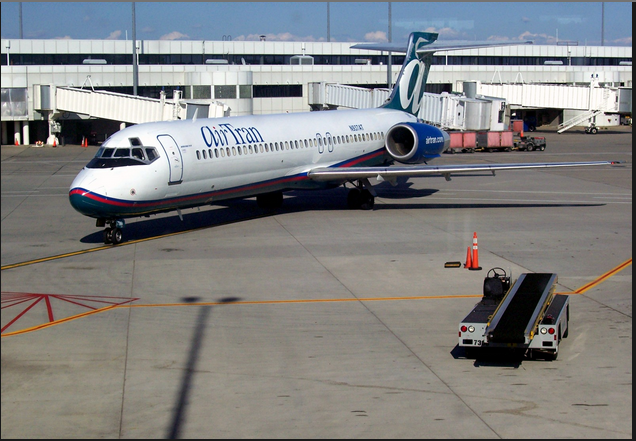 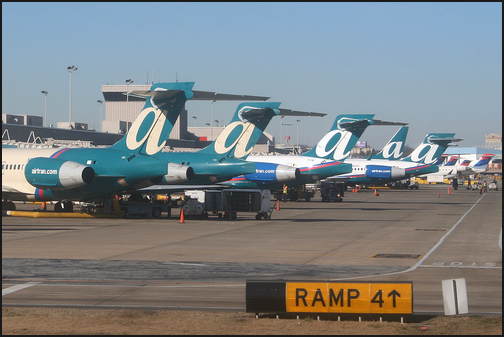 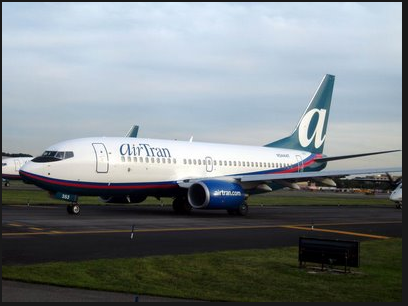 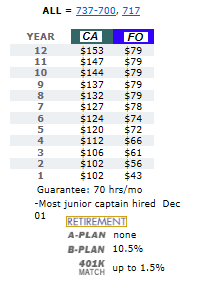 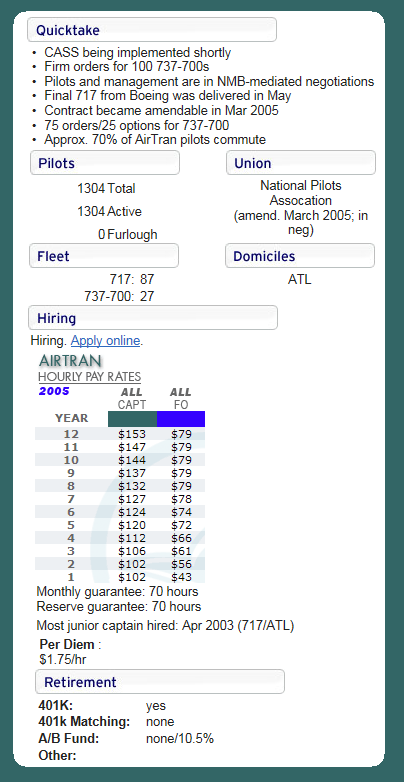 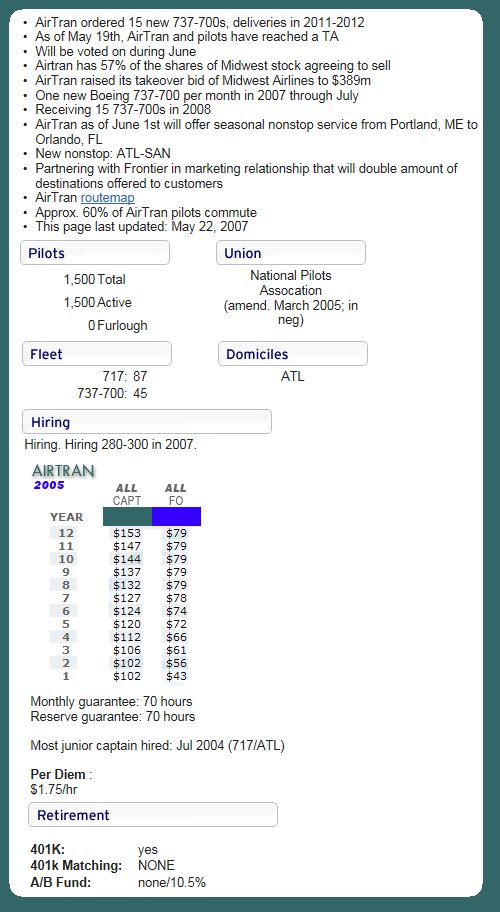 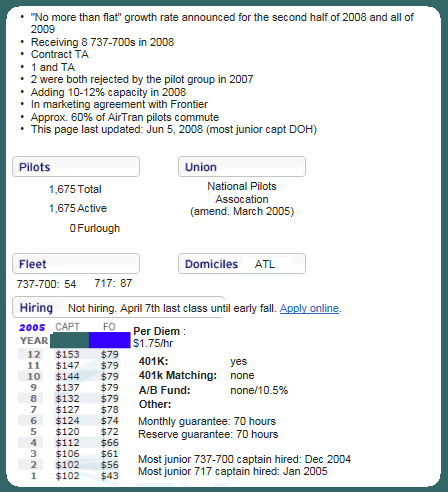 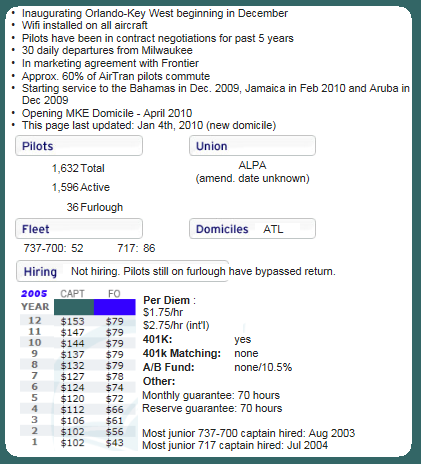 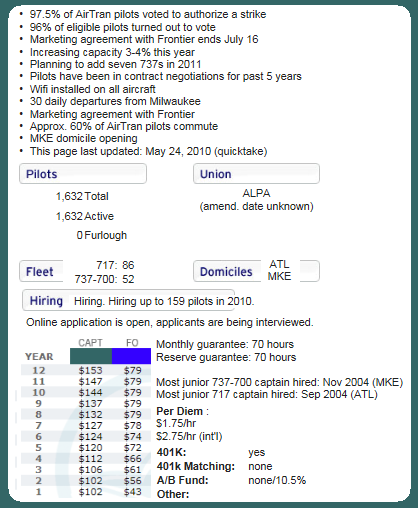 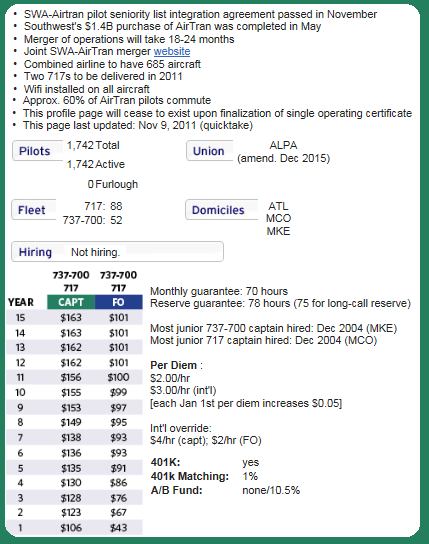 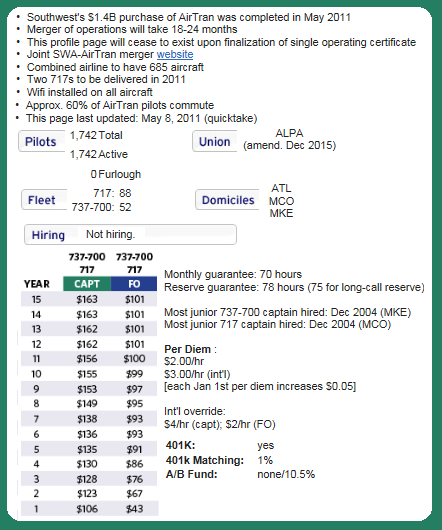 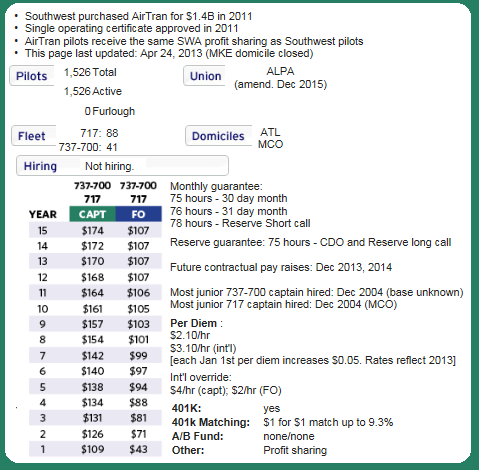 Founded - 1994, when AirTran Corporation, the holding company of Mesaba Airlines, purchased Conquest Sun, a 737 startup founded by former Eastern Airlines empoloyees.  In 1995, AirTran Airways was spun off by Mesaba and formed its own holding company called Airways Corporation.  On July 10, 1997, ValuJet, Inc announced plans to acquire Airways Corporation, Inc.  The deal closed in 1997, during such time the company name was changed to AirTran Airlines.

The original AirTran Airways, a Boeing 737 operator with service to/from Orlando, was founded by AirTran Corporation, the holding company of Mesaba Airlines of Minneapolis, Minnesota, operating as a Northwest Airlink carrier with hubs in Minneapolis and Detroit. In 1994, AirTran Holdings purchased a start up 737 operator named Conquest Sun and renamed the airline AirTran Airways. Conquest Sun, similar to ValuJet, was an airline started by former Eastern Air Lines employees. The original AirTran Airways moved its headquarters to Orlando, Florida, and grew to 11 Boeing 737 aircraft serving 24 cities in the East and Midwest providing low-fare leisure travel to Orlando. In 1995, AirTran Airways was spun off by Mesaba and formed its own independent holding company named Airways Corporation.
On July 10, 1997, ValuJet, Inc., the holding company for ValuJet Airlines, Inc., announced plans to acquire Airways Corporation, Inc., the holding company for AirTran Airways, Inc. of Orlando, Florida. The deal was scheduled to close on November 17, 1997.
On September 24, 1997, ValuJet Airlines changed its name to AirTran Airlines. On November 17, 1997, ValuJet, Inc., acquired Airways, Inc., and renamed the holding company, AirTran Holdings, Inc. In the summer of 1998, the two airlines merged onto the same FAA certificate and the AirTran Airways name survived. While the hub remained in Atlanta, the headquarters of the new entity was combined in Orlando, Florida, on January 28, 1998.
In January 1999, a new management team led by Joe Leonard, a veteran of Eastern Air Lines, and Robert L. Fornaro, of US Airways, took the reins at the airline.

AirTran received the last 717 built in 2006
On August 15, 2001, the company's stock began trading under the ticker symbol AAI on the New York Stock Exchange.
In October 2003, AirTran began services to Washington, D.C.'s Reagan National Airport, and to San Francisco the following month.
On July 1, 2003, AirTran placed an order for 100 Boeing 737 aircraft.
On January 5, 2004, AirTran's last Douglas DC-9 was retired, leaving it with a fleet of more than 70 Boeing 717s. The first Boeing 737 entered AirTran's fleet in June 2004, ending the service by Ryan which were used on an interim basis to fly transcontinental flights in order to compete with JetBlue which had recently begun service from Atlanta to the west coast. JetBlue later left Atlanta due to increased competition from AirTran and Delta.
On May 23, 2006, AirTran accepted one of the last two Boeing 717s delivered in a ceremony with Midwest Airlines, who accepted the other 717.
In November 2007, Robert L. Fornaro took over as CEO, as well as President. Joe Leonard remained Chairman of the Board of Directors until June 2008. Upon his retirement, Fornaro then became Chairman making him Chairman, President and CEO.
In 2009, AirTran Airways was the first major airline to outfit all of its aircraft with Gogo Inflight Internet.
By 2009 AirTran underwent major expansion in smaller cities such as Yeager Airport (Charleston, WV); Asheville Regional Airport, NC; and Harrisburg International Airport, PA.

See also: AirTran Holdings#Proposed AirTran Holding acquisition of Midwest Airlines Group
In 2004, AirTran sought a major expansion at Chicago-Midway Airport by buying the leases of ATA Airlines' 14 gates. Southwest Airlines made a higher bid for the gates, and AirTran lost the deal.
In December 2006, Air Tran Holdings announced that it had been trying to acquire Midwest Air Group. On August 12, 2007, AirTran announced its attempt to purchase Midwest Airlines had expired, while TPG Capital, in partnership with Northwest Airlines, had entered into an agreement to purchase Midwest Airlines for an amount larger than the AirTran Airways' proposal. However, on August 14, 2007, AirTran increased its offer to the equivalent of $16.25 a share, slightly more than the $16 a share from TPG Capital investors group. However, Midwest announced TPG would increase its offer to $17 per share and a definitive agreement had been reached late on August 16, 2007.
On September 21, 2007, AirTran pilots, represented by the National Pilots Association, rejected the carrier's contract proposal. Two weeks earlier, the pilots voted to dump the union president and vice president. On April 10, 2009, 87% of the pilots at AirTran voted to merge the National Pilots Association with the world's largest pilot union, Air Line Pilots Association (ALPA).

An AirTran 737-700 which the airline continued to receive until the acquisition by Southwest
On April 6, 2010 AirTran Airways opened their second crew base, at General Mitchell International Airport in Milwaukee, the same day they officially announced Milwaukee as their second hub.
On July 27, 2010, AirTran Airways hosted the grand opening of their new System Operations Control (SOC) Center at Orlando International Airport. This 16,000-square-foot (1,500 m2), $6.9 million state-of-the-art command center serves as the 24-hour nerve center for the entire airline with over 700 flights per day. The company employs more than 1,000 crew members in central Florida at several facilities, including their corporate headquarters, the SOC and a maintenance facility in addition to passengers operations at the airport. After considering putting the SOC Center in Atlanta where AirTran has their largest hub, the decision was made to expand the facility in Orlando adjacent to AirTran’s headquarters.
On July 17, 2010, AirTran Airways announced plans to open a crew base at Orlando International Airport in Orlando, Florida.[9] The base initially employed 100 pilots, including a chief pilot. Orlando joins Atlanta and Milwaukee. In October 2010, the crew base opened at Orlando International Airport in Orlando, Florida.
Prior to the winding down of the airline, AirTran grew to serve more than 70 cities coast-to-coast as well as in the Caribbean and Mexico with more than 700 flights per day and over 8,500 crew members serving nearly 25 million passengers per year.

On September 27, 2010, Southwest Airlines announced they would acquire AirTran Airways for a total cost of $1.4 billion. The acquisition would give Southwest a significant presence at many of AirTran’s hubs such as Atlanta (then the largest U.S. city without Southwest service), Milwaukee, and expanded service in Baltimore and Orlando. With the merger, Southwest adds international service to several leisure destinations such as Cancún, Montego Bay and Aruba. Southwest will integrate AirTran's fleet of Boeing 737-700 series aircraft into Southwest Airlines brand and livery, and the Boeing 717 fleet will be leased out to Delta Air Lines starting mid-2013. The airlines plan to have the acquisition completed and finalized within the next two years; until then, the carriers will operate as separate airlines. The deal closed on May 2, 2011 and a single operating certificate for the combined carrier was achieved March 1, 2012. Total integration of all employee groups between the two carriers is expected to be completed by 2015.
On February 14, 2013, Southwest Airlines announced that they had began codesharing with AirTran. They took the first step on January 26, 2013, by launching shared itineraries in five markets. Southwest continued launching shared itineraries with 39 more markets beginning February 25, 2013. By April 2013, shared itineraries will be available in all Southwest and AirTran cities (domestic and international). Southwest anticipates that the integration will be complete in late 2014.

AirTran adopted an approach to employee recruitment similar to Southwest Airlines with an emphasis on functional skills and relational competence. The airline had clear job specialisation with the expectation of flexibility between jobs as required by day-to-day operational circumstances. AirTran’s training approach involved drawing the link between individual job performance, the airline’s overall financial performance and the importance of achieving high levels of customer service and efficiency. 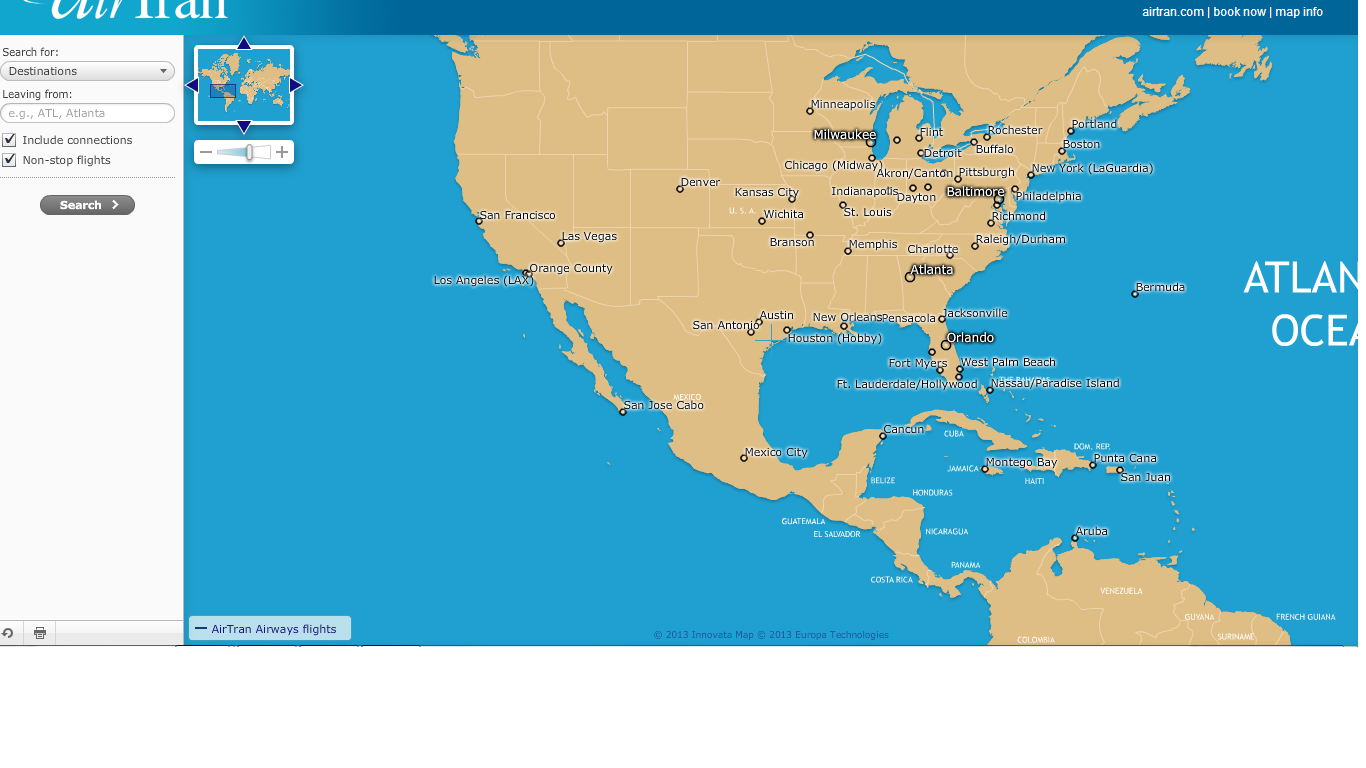 
Please click on graph to see the DOT data source.  If you do though, you will leave this site. 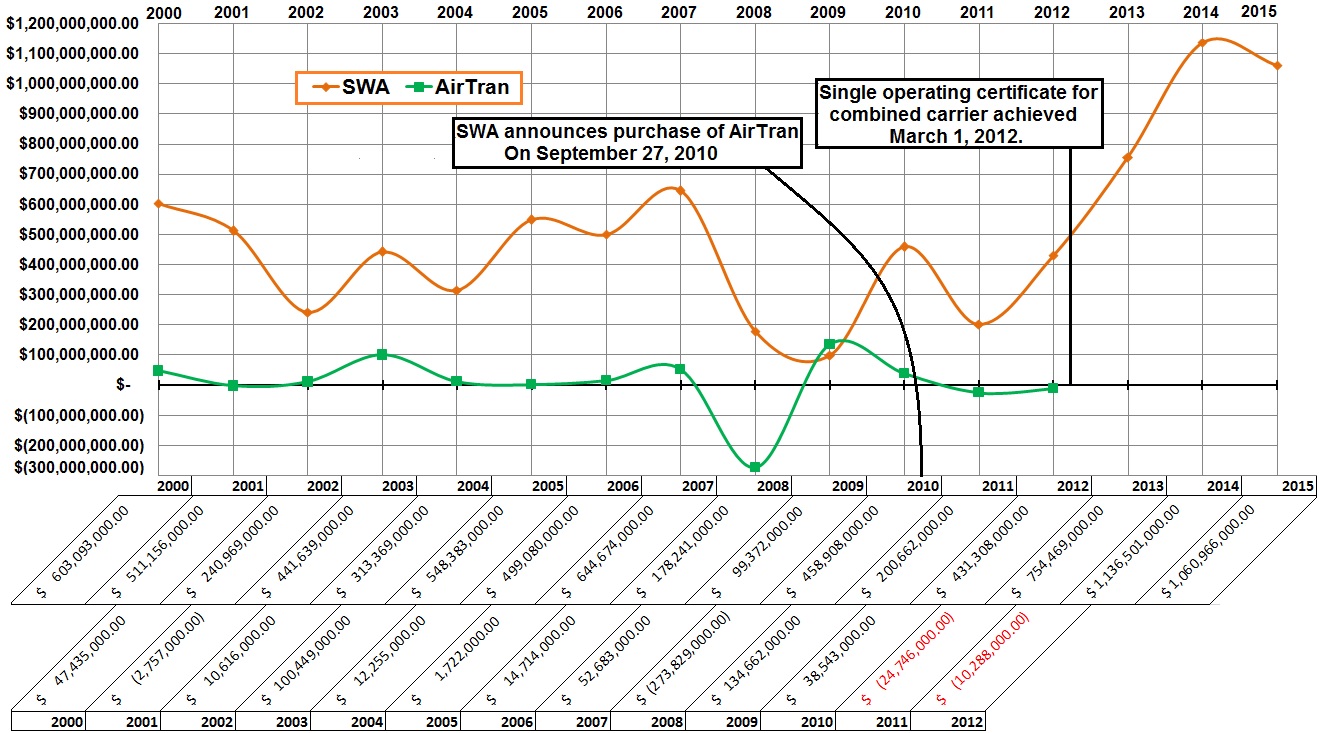