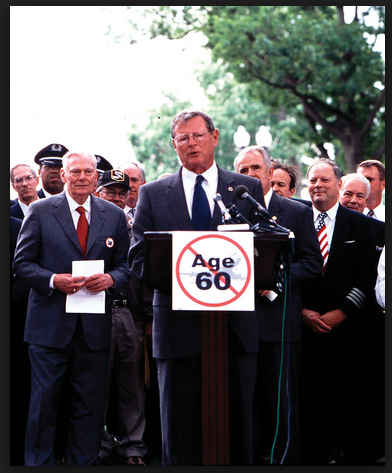 Origins of the Age 60 Rule

A murky tale of power, politics, and influence.

As ALPA provides members with information on the FAA’s Age 60 rule and prepares to poll its members about the Association’s position regarding the regulation, it’s worth reflecting on how this rule came into existence.

One theory suggests that, while previous attempts had been made to institute an age-specific retirement rule, a 1958 labor dispute between pilots of American Airlines, then represented by ALPA, and the company’s chief executive, C.R. Smith, may have been the straw that broke the camel’s back and provided the final impetus to implement the current regulation.

On Jan. 15, 1958, ALPA signed its first jet contract with National Airlines in anticipation of the airline adding DC-8s to its fleet. It was the dawn of the jet age, and airlines were scrambling to replace their piston-driven aircraft with jets and turboprops. Many airline managements propagated the idea that older airline pilots might not be able to adapt to the physical and mental demands of flying at higher altitudes in faster, more sophisticated airliners.

But airline managements had another not-so-public reason for declaring their concern for an aging pilot population. They wanted to get their jet operations up and running quickly. A fresh supply of young aviators who had received jet training in the military was already available, and airline managers knew that they could save considerable time and expense by recruiting these younger pilots instead of having to train their older, more senior pilots.

In the April 1959 issue of Air Line Pilot, ALPA reported that Capt. Deke DeLong, "the nation’s oldest airline pilot," had retired from Northwest Airlines at the considerable age of 65. That same year, the FAA estimated that approximately 40 active airline pilots were over the age of 60. Aviation was still relatively young, and so was the majority of its pilots. But the number of pilots over the age of 60 was expected to surge in the years to come.

At the time, no government regulation prohibited airlines from using pilots past a certain age, but several airlines sought to impose their own mandatory-retirement policies, predominately at age 60. Western Airlines, TWA, and American Airlines all tried to retire pilots based on age, but pilots of each of the airlines brought grievances to resist these policies. In each of these cases, an arbitrator ruled in favor of the pilots.

In the grievance brought on behalf of Western Airlines pilots, the arbitrator wrote in his decision: "There is no testimonial basis and no ‘fact of life’ on which we could be expected to take a kind of ‘judicial notice’ that supports the view that it is unsafe to let a pilot perform after the age of 60. That is not to say that there is not some age--say 90--when we would take judicial notice of physical impairment beyond all reason. It is enough to say that the evidence here does not support the theory that the attainment of age 60 is in itself enough to disqualify a pilot."

The pilots of Western and TWA went back to work. But American Airlines refused to comply with the binding arbitration. American’s C.R. Smith chose to ignore the ruling and continued to enforce his company’s mandatory-retirement policy. The carrier’s disregard for the arbitrator’s decision was just one of many issues that led to a 20-day pilot strike that began Dec. 20, 1958.

Only a month earlier, Smith had appeared on the cover of Time magazine, which heralded him as the father of commercial jet travel. Less than 2 months later, American would be the first airline to provide permanent transcontinental jet service. But the threat to Smith’s plan to retire his older pilots would hinder American’s ability to aggressively expand its jet operations.

The three men who brought the grievance at American--Capts. Robert J. Rentz, Ernie A. Cutrell, and James H. Burns--were no ordinary pilots. They were veteran flyers who had attained legendary status in the piloting community and had earned the respect of their peers.

Capt. Rentz had already acquired many thousands of hours in the air when he left airline flying during World War II to serve as commander of the Army’s 1st Combat Cargo Group. He flew supplies, equipment, and personnel during campaigns in China, India, and Burma before returning to his airline job after the war.

Capt. Cutrell was a pioneer in instrument flying and blind-landing experiments. In 1946, he was presented the Chanute Flight Test Award for his contribution to aerospace sciences, an honor given to Howard Hughes just a few years earlier. In 1957, Capt. Cutrell became the first recipient of the ALPA Air Safety Award for his work on runway approach lighting. He was also a mentor to a young Ernest K. Gann, who paid homage to him in Fate is the Hunter, Gann’s classic 1961 book about his own experiences as an airline pilot.

Capt. Burns, the oldest of the three, was a charter member of ALPA and had been one of Dave Behncke’s key men during the Association’s early days. To protect him from anti-union retaliation, Capt. Burns was referred to as Mr. I in the Association’s founding documents. On Dec. 27, 1931, he and 12 other men met secretly in a room at the Morrison Hotel in Chicago, Ill., to form an alliance to protect their fellow pilots from oppressive airline managements, advocate for safety, and uphold the honor of the airline piloting profession.

Such was the caliber of the men that C.R. Smith now sought to expel from the profession--a profession to which they had given so much. Indeed, these three men embodied the hard-earned experience, the dedication to safety, and the fierce loyalty to their fellow pilots on which the profession was built. Men such as these defined what it meant to be a line pilot.

On Jan. 10, 1959, to bring an end to the costly strike, Smith gave in to many of the union’s demands. As a part of the strike settlement, Smith agreed to reinstate the three captains. But after the strike ended, he delayed the promised reinstatement.

Only a few months before the strike’s end, Congress had created the Federal Aviation Agency. President Eisenhower appointed retired Air Force Lieutenant General Elwood "Pete" Quesada to head the new agency. As fate would have it, Smith and Quesada were old buddies from their military days. During World War II, Smith had temporarily left his position at American and joined the Army Air Force, rising to the rank of major general. He was instrumental in organizing the U.S. Air Transport Command and served for a time as its deputy commander. During this time, Smith and Quesada got to know each other well.

In a Feb. 5, 1959 letter, Smith wrote privately to Quesada, suggesting that it might be necessary for the FAA to designate a suitable age for retirement. Shortly thereafter, Smith also sent a letter to ALPA’s then-president Clarence Sayen, asking for ALPA’s help in persuading the FAA to establish a mandatory retirement age for pilots. Sayen refused, saying that the Association would abide by the System Board of Adjustment’s decision in favor of the pilots and that he would urge Capts. Burns, Rentz, and Cutrell to report to the company for service.

Smith, to make his case within the FAA for a mandatory retirement age, produced his own study of American Airlines pilots, which indicated that younger pilots required less training time to make the transition from propeller to jet airliners.

Quesada responded with two proposals that would establish a maximum age of 55 for pilots to receive a type rating in turbojet aircraft, and a mandatory retirement age of 60 for all airline pilots.

Quesada convened a panel of experts to review the proposals. The panel supported the mandatory-retirement recommendation, although it eventually decided against an age-55 turbojet type rating limitation. Later, when Smith’s study was presented to legal counsel for review, FAA lawyers recommended that Smith’s study of the American Airlines pilots be abandoned. The legal team recommended instead that, to strengthen its position, the FAA base its justification of the rule solely on medical criteria as opposed to training performance.

Considering the slow movement that has become the norm in recent years for most government regulatory agency bureaucracies, the speed at which the rule was developed and implemented was remarkable. Within 2 weeks of Smith’s private appeal to Quesada, the FAA had already drafted a medical justification for the rule. A notice of proposed rulemaking was published within a matter of months.

The final rule was published in the Federal Register on Dec. 5, 1959, only 10 months to the day from C.R. Smith’s first appeal to Quesada.

The regulation became effective on March 15, 1960, forcing Capts. Rentz, Cutrell, and Burns into retirement once and for all.

ALPA fought to overturn the rule for more than 20 years, taking the position that mandatory retirement should be based on a pilot’s actual mental and physical capabilities rather than an arbitrary age. (In the next issue of Air Line Pilot, we will cover ALPA’s struggles in the late 1970s and early 1980s, as the union dealt with the consequences of the FAA’s intransigence regarding its Age 60 rule and voted to support it in view of its relevance to contract items such as retirement benefits.)

Little is known about what became of Capts. Rentz and Burns after their airline days had come to an end, but Capt. Cutrell continued to fly for many years afterward. He qualified on B-52s and KC-135 tankers at Castle Air Force Base, Calif., in a transition course for Air Force Reserve officers--a testament to the fact that some pilots can indeed fly beyond age 60, including flying jets.

While no direct evidence suggests any impropriety in the connection between C.R. Smith and Elwood Quesada, those opposed to the Age 60 rule remain suspicious of the relationship. They note that nearly a year after the rule went into effect, and shortly after Quesada retired from his post as Administrator of the FAA, he was elected to a seat on the American Airlines’ Board of Directors.