Chautauqua Airlines is a wholly owned subsidiary of Republic Airways Holdings, which employed approximately 5,000 aviation professionals as of April 2008. The Chautauqua aircraft are deployed under the “express” banners of four major airlines; American, United, Delta, and U.S. Airways. Chautauqua Airlines do not fly their aircraft in their own aircraft livery color scheme, but colors and branding of the airlines they serve. They do, however, have several “blue tail” aircraft which they operate for independent charters and when other aircraft are in maintenance. Chautauqua airlines currently operates an all-jet fleet of Embraer aircraft. Chautauqua is historically significant for it is one of the last remaining companies still in business that once flew as a part of the Allegheny Commuter. Allegheny Commuter was one of the first regional franchisee systems combining independent regional and commuter airlines under one seemingly contiguous and seamless brand. Ironically, it no longer services the Chautauqua County-Jamestown Airport from which it began.

The airline was established on May 3, 1973, in Jamestown, Chautauqua County, New York, USA, and started operations on August 1, 1974 using two 15-passenger Beech 99 aircraft. In 1984, the airline grew by adding five 19-passenger Fairchild Metro III aircraft to its fleet. In 1986, Chautauqua Airlines was purchased by GAC, an affiliate of Guarantee Security Life Insurance Company, and added twelve 30-passenger Saab 340 aircraft to replace slower Shorts 3-30’s in the fleet.

Chautauqua Airlines had a rough year in 1994, posting its first loss in 20 years. The loss can be attributed to the crash of an American Eagle commuter plane flying from Chicago to Indianapolis. Media coverage of the crash spread quickly, and because of its association, Chautauqua Airlines lost passengers who had come to distrust commuter planes. However, Chautauqua Airlines bounced back, while renewing its code-share agreement with USAir on May 8, 1994. To better support its growing operations, the corporate headquarters were relocated to Indianapolis, Indiana.

Chautauqua was acquired by Wexford Management in January 1998 and also entered into an agreement with Embraer for the purchase of ten 50-passenger Embraer ERJ-145 regional jet aircraft. In 1999, Chautauqua entered into a 10-year code-share agreement with Trans World Airlines to operate at least fifteen Embraer 145 regional jets for the airline. In June 2001, American Airlines, who had purchased TWA, renewed the existing regional jet service with Chautauqua for feeder service at St. Louis using 44-seat Embraer 140 aircraft. In March 2001, Chautauqua entered into a partnership with America West to operate as an America West Express affiliate using twelve Embraer 145 jets in the Eastern United States, but ended this service in February 2003. In November 2002, Chautauqua began flying regional jet service to Florida for Delta. In March 2004, United Airlines announced that Chautauqua Airlines would operate sixteen 50-seat regional jets for United Express.

On May 26, 2004, an IPO was launched on NASDAQ under the ticker symbol RJET with Wexford Capital remaining the majority shareholder of Republic Airways Holdings, the parent company of Chautauqua Airlines. Later that year, Republic Airways announced a new jet-service agreement with US Airways for the operation of Embraer 170 and Embraer 190 aircraft.[3] Chautauqua was one of the first U.S. operators of the Embraer 170 regional jet, but was forced to transfer these aircraft to sister company Shuttle America in 2005 after the pilots’ union at American Airlines claimed the aircraft violated a “scope clause” regulating the size of regional aircraft operated under American brands.[4] In the first half of 2007, Chautauqua took delivery of 24 Canadair CRJs and flew them under a code-share agreement with Continental Airlines. Some of these aircraft were previously owned by Atlantic Coast Airlines (Independence Air), and some were owned by Comair. It has phased out all of its Bombardier CRJ products.

In October 2012, Republic Airways reworked a deal with partner Delta Air Lines, part of the company's broader effort to trim costs and boost revenue amid a decline in demand for regional airline service, to operate seven additional 50-seat Embraer 145 planes under the Delta Connection brand. 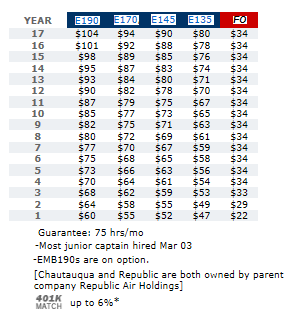