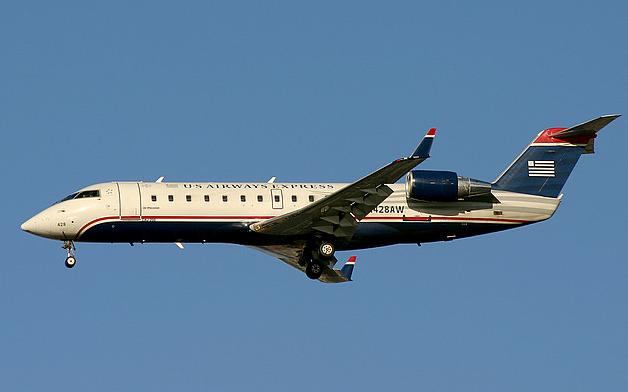 Air Wisconsin Airlines Corporation is an airline based at Outagamie County Regional Airport in the town of Greenville, Wisconsin, United States, near Appleton. Air Wisconsin is the largest privately held regional airline in the United States. It operates regional jet flights as US Airways Express under contract to US Airways, serving 69 cities in the US and Canada with hubs at Philadelphia International Airport and Ronald Reagan Washington National Airport. The airline is also a ground-handler for United Express at 17 locations and for US Airways at 3 locations.

Former United Express Bombardier CRJ-200 operated by Air Wisconsin at Chicago
The airline was established in 1965 and started operations on August 23, 1965. It was founded to connect Appleton, Wisconsin with Chicago. In 1985 it merged with Mississippi Valley Airlines and continued to operate under the Air Wisconsin name. In 1990 it acquired Denver-based Aspen Airways and was itself bought by United Airlines a year later. Air Wisconsin pioneered the concept of codesharing as an United Express carrier and rapidly became the nation's largest regional airline in the 1980s.

United Airlines sold Air Wisconsin to CJT Holdings in 1993. Air Wisconsin was then renamed Air Wisconsin Airlines Corporation or AWAC because UAL retained the rights to the Air Wisconsin name. In February 1998 it acquired the assets of Mountain Air Express including Dornier 328 turboprop aircraft and expanded operations in the west.[5] It flew as a feeder for AirTran Airways under the name AirTran JetConnect, but this relationship was discontinued in July 2004. Even after significant concessionary givebacks by all unions, Air Wisconsin was unable to secure a long-term deal providing service for United Airlines. United ended its contract with AWAC in April 2005, and the last flight under the United code operated on April 16, 2006. At one point, Air Wisconsin operated British Aerospace (BAe) ATP turboprop aircraft as well as BAe 146-100, BAe 146-200 and BAe 146-300 jet aircraft on United Express services. These were all large aircraft types when compared to other regional aircraft in operation at the time. Air Wisconsin was the only U.S. operator of the BAe ATP turboprop and also the BAe 146-300, which is the largest member of the BAe 146 family of jet aircraft.