On January 13, 1982, Air Florida Flight 90 crashed into Washington, DC's 14th Street Bridge and fell into the Potomac River shortly after taking off. A total of 70 passengers, 4 crew, and 4 motorists on the bridge were killed. The crash was due to an anti-icing system being left off, which caused an inaccurately high engine pressure ratio (EPR) indication at an extremely low power setting, and the crew's failure to either abort the takeoff or apply maximum engine power. The crash prompted modifications to Air Florida's pilot training regarding anti-ice systems. The FAA also required revised aircraft de-icing procedures at airports. 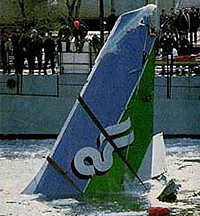 The crash of Flight 90, coupled with Air Florida's high financial leverage and reliance on foreign currency trading for profits, led the company to declare bankruptcy and cease operations on July 3, 1984, despite an effort by new head Donald Lloyd-Jones (an alumnus of American Airlines) to save the company. When operations ceased, Air Florida had over 18 months of unprocessed credit card ticket purchases and dozens of flight crews idle at home because management had failed to renew leases on all DC-10-30 aircraft. Midway Airlines acquired most of the assets of Air Florida for $53 million while Air Florida was in Chapter 11 bankruptcy protection.