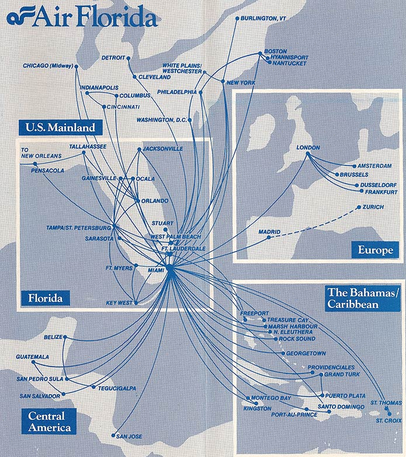 Air Florida was based at Miami International Airport. It was formed in 1971 by a Miami native, Eli Timoner and was organized by company president Ted Griffin, a former marketing director of Eastern Airlines. It started operations in 1972. Initial aircraft included the Boeing 707, later transitioning to the Lockheed L-188 Electra turboprop. Air Florida's fleet grew to include the McDonnell Douglas DC-9, Boeing 727, Boeing 737, and McDonnell Douglas DC-10.

Ed Acker, formerly CEO of Braniff International Airlines, led an acquisition of Air Florida in 1975 and expanded the airline into the interstate market following the Airline Deregulation Act of 1978. In addition to Air Florida having a large presence in the Northeast-to-Florida market during the 1970s and 1980s, the airline also expanded internationally and served various points in the Caribbean and Central America, as well as London, Brussels, Shannon, Frankfurt, Zurich, and Amsterdam. Air Florida was well known for its attractive flight attendants and, on international flights, four-star cuisine. In 1981, shortly before the crash of Air Florida Flight 90, Acker left Air Florida to become the Chairman, CEO and President of Pan American World Airways.

Air Florida tried to buy out Western Airlines during the 1980s, to increase its presence in the West and begin flights to Mexico and western Canada. The negotiations with Western got Air Florida 16 percent of the California-based company. Western was later absorbed by Delta Air Lines.