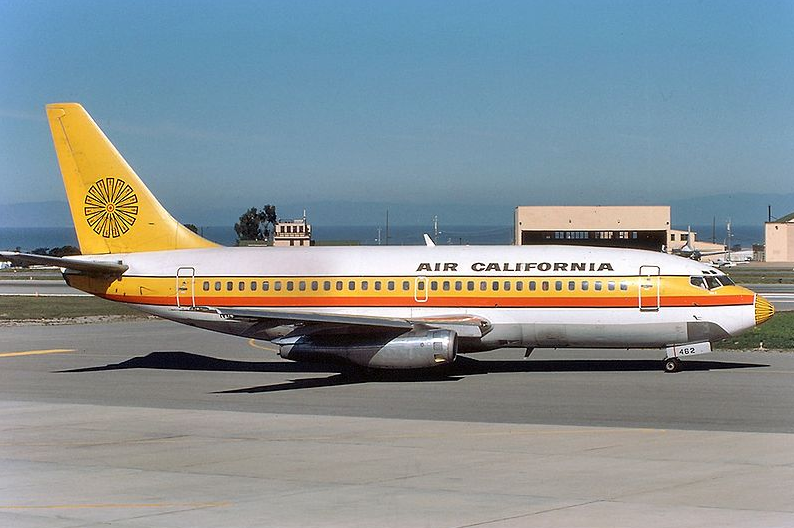 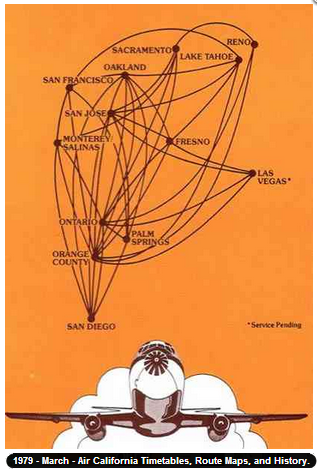 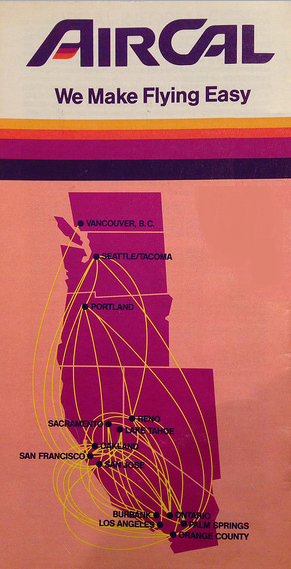 Air California, later AirCal, began as an intrastate regional airline operating mainline turboprop and then jet aircraft. The air carrier served points in the state of California and in later years a number of destinations in neighboring U.S. states. The system eventually included service to Chicago, Seattle, Anchorage, Alaska and Vancouver, British Columbia. It was founded by a partnership of Orange County businessmen as an alternative to other airlines and what was left of the state's passenger railroad system. The airline's initial route as of their January 1967 debut was between Orange County Airport (SNA) and San Francisco International Airport (SFO), a previously unserved route, using Lockheed L-188 Electra four engine turboprop airliners. Air California was headquartered in Newport Beach, California. The airline's "home" airport over the years was Orange County Airport which is now known as John Wayne Airport. The importance of the Orange County Airport to the airline was perhaps reflected in the air carrier's two letter code, being "OC", for its flight numbers.

Air California was one of the last airlines in the U.S. to use the Electra propjet in scheduled passenger service. One of the airline's early promotional campaigns included an illustration of an Electra dressed in the airline's gold "sunburst" tail emblem, with the slogan, "Our Electras Are Easy To Take". In later years after the airline had changed its name to AirCal, this slogan was changed to "Our 737s Are Easy To Take".
In the late 1970s Air California's fleet was primarily comprised of Boeing 737-200 jet aircraft. Boeing 737-100 models were operated as well. In addition, the airline flew a pair of Douglas DC-9-10 twinjets during the late 1960s which had been leased in order to provide extra capacity while Air California was awaiting delivery of new Boeing 737 jetliners. Lockheed L-188 Electra turboprops were also operated as they were required for flights into the Lake Tahoe Airport as this airfield did not allow airline jet aircraft operations for a number of years. The Electras were finally retired after the airline ceased service to Lake Tahoe. However, AirCal then returned to Lake Tahoe some years later with the first ever scheduled passenger jet service to this high elevation airport in the Sierra Nevada Mountains after the ban on jet operations was rescinded. AirCal initially served Lake Tahoe with McDonnell Douglas MD-80 aircraft and later with Boeing 737-300 jetliners. The airline also operated direct, no change of plane jet service between Lake Tahoe and Chicago O'Hare Airport at one point with Boeing 737-300 aircraft.

Source: Air Transport World
One program used by Air California in the early to mid-1970s was to offer school field trips to Sacramento at $25 a head, where school children would be taken on a tour of the California State Capitol, Governor's Mansion, and Sutter's Fort.
Another marketing program took place in 1980 when the airline began upgrading its fleet with the new McDonnell Douglas MD-80 jetliner. For a short span of several hours at Burbank Airport, one could purchase deeply discounted one-way passes good for up to one year for flights to either of the two San Francisco Bay Area airports it served at that time, San Jose or Oakland. The price was $9.80 one way/$19.60 round trip, with a limit of four round trips. Later that year when the carrier began service to San Francisco International Airport the passes were valid for that destination as well.

It was a fierce competitor of Pacific Southwest Airlines (PSA), another intrastate carrier. Following the Airline Deregulation Act of 1978, Air California initiated new service to Las Vegas and Reno in Nevada. These were the first routes undertaken by Air California outside of the state. Service to Portland, Oregon was then added followed by new service to Seattle, Washington and Phoenix, Arizona. However, this expansion also resulted in the airline becoming a takeover target for larger, national air carriers.

In 1981 the airline changed its name to AirCal and adopted a bright new logo and image, including a new wardrobe for its employees by noted fashion designer Mary McFadden. During the 1980s it operated a small fleet of Boeing 737 jets (series -100, series -200 and series -300 aircraft) as well as seven McDonnell Douglas MD-80 jetliners and six British Aerospace BAe 146-200 jets. The latter two types were also operated at the time by rival Pacific Southwest Airlines on several of the same routes. Acquisition of the BAe 146 jet enabled AirCal to increase flights at noise-sensitive Orange County Airport as this British-manufactured aircraft was quieter than other jetliners. PSA also acquired BAe 146 aircraft which were then used from Orange County Airport in competition with AirCal. By May 1987 AirCal had expanded with flights to Chicago, Anchorage, Alaska and its only international destination, Vancouver, British Columbia.

Boeing 737-200 in 1983.
AirCal, along with its equipment, routes, and facilities, was eventually acquired piecemeal by AMR Corp., the parent company of American Airlines, in 1987. American continued to fly many of the former AirCal aircraft from a new hub at San Jose International Airport (SJC) until American transferred the bulk of its San Jose operations to Reno Air in the mid-1990s. American also continued to operate former AirCal Boeing 737-300 aircraft into the Lake Tahoe Airport before turning over all Lake Tahoe service to their regional affiliate, American Eagle. American would later acquire Reno Air in 1999, and San Jose was an American Airlines hub until the early 2000s (and a downturn in the economy).
All eight former AirCal Boeing 737-3A4s were later operated by Southwest Airlines. AirCal also had ordered a ninth 737-3A4, but it was never delivered. Eventually, this aircraft found its way into the Southwest Airlines' fleet as well. As of August 2010, Southwest retired most of the former AirCal fleet, with N679AA being the only remaining Boeing 737-300 series aircraft still in service.