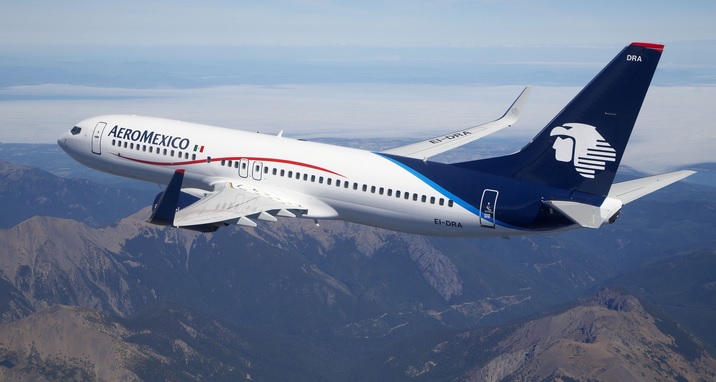 Aerovías de México, S.A. de C.V.[7] (Airways of Mexico, SA de CV), operating as AeroMéxico, is the flag carrier[8] airline of Mexico based in Mexico City. It operates scheduled services to more than 56 destinations[9] in Mexico; North, South, and Central America; the Caribbean, Europe, and Asia. Its main base is Mexico City International Airport, with a main hub at Monterrey and secondary hubs at Guadalajara and Hermosillo.

Grupo Aeroméxico includes Aeroméxico mainline and Aeroméxico Connect (regional subsidiary). The group held #1 place in domestic market share with 36.6%, and #2 place behind American Airlines with 15.3% of the international market share, in the 12 months ending March 2014,[10] becoming Mexico's largest domestic airline group. Aeroméxico is one of the four founding members of the SkyTeam airline alliance, along with Air France, Delta Air Lines, and Korean Air

The airline was established as Aeronaves de México on 15 September 1934, by Antonio Díaz Lombardo. The first plane was a Stinson SR. Julio Zinser piloted the maiden flight on the Mexico City - Acapulco route on 14 September 1934.

Aeronaves de Mexico Bristol Britannia at New York JFK in 1958
When World War II began, the airline continued to grow with the help of Pan Am, which owned 25% of the new Mexican airline. Aeroméxico saw few changes for the next two decades. However, during the 1950s, renovation began, and the airline took over various small competitor companies across the country, including Aerovías Guest (the second airline of the country at that time) that held the routes to Madrid and Paris. Aeroméxico added aircraft including the Douglas DC-3 and its successor, the Douglas DC-4.

1950s
During the late 1950s, the Douglas DC-4's were replaced by some pressurised Douglas DC-6 and two Bristol Britannias, the first turboprop passenger plane in the fleet and in 1958, services were inaugurated to Idlewild Airport (now JFK) using the Britannias. The Mexico City-New York route would prove profitable for "Aeronaves" and its North American competitors. The airline was nationalised in 1959.

1960s
In the early 1960s, the fleet of Aeronaves de México (Aeroméxico) included Douglas DC-3, Douglas DC-6, and Bristol Britannia aircraft. Starting in 1961, "Aeronaves" began replacing its piston-engined planes with new jets. The first jet-engined aircraft were a pair of Douglas DC-8's. The planes were used on routes within Mexico and to New York City. Between 1962 and 1963, Aeronaves de México (Aeroméxico) took over Aerovías Guest Mexico the second airline, and they were merged under the name Aeronaves de México. Later in the 1960s, more DC-8's were added and service to Europe was resumed, operated by two Comet-4C aircraft dry-leased by Aerovías Guest prior to the merger.

The 1970s brought dramatic changes for Aeroméxico. In 1970, under a government plan, Mexican domestic airlines were nationalized into an integrated air transport system under the control of Aeronaves de México. The system included eight smaller carriers, although these were later disbanded.[11] During the early-1970s, the remaining Douglas DC-6 and Bristol Britannia aircraft were retired. A new color scheme (orange and black) was introduced and the airline changed its name from "Aeronaves de México" to its current, shortened version of Aeroméxico in February 1972.

Aeroméxico, as one of the launch customers of the Douglas DC-10-30s program, received the first of its two planes in 1974, registered as XA-DUG and XA-DUH. That same year the airline also took delivery of their first seven Douglas DC-9-32s. During this period the airline's popularity and visibility grew dramatically. This was due in part to Aeroméxico's involvement in Mexican movies. Basically, every time a character in any movie produced in Mexico had to fly somewhere, they supposedly flew on Aeroméxico. Service to Canada was initiated and in early-1970s, two more DC-9-15s were added to the fleet.

1980s
The early 1980s brought times of expansion. A new color scheme was introduced (orange paint and silver), two DC-10-15 and a DC-10-30 planes were added in 1981, N10038 and N1003N, and in 1984, N3878P later XA-RIY. Aeroméxico as one of the launch customers of the McDonnell Douglas MD-82, a stretch version of the DC-9, received the first two planes in late 1981. During the period between 1980 and 1981, eight more DC-9-32 aircraft were added. The late 1980s were tough times for Aeroméxico. On August 31, 1986, the company suffered the only fatal accident outside Mexico when Aeroméxico Flight 498, a Douglas DC-9, approaching Los Angeles International Airport was struck by a small Piper aircraft. Both aircraft then fell to earth in the Los Angeles suburb of Cerritos, California. All 64 passengers and crew on board the DC-9-32 were killed, as were three on the Piper and fifteen people on the ground. After three years and a long trial, the plane crew and the airline were found not to blame. This was because the pilot of the Piper had strayed into an air traffic control zone reserved for commercial flights. That same year, the airline was acquired to the charter carrier GATSA and used it for their charter operations until December. In April 1988, the state owned company was declared bankrupt. The main reasons were lack of organization, a fleet with an average of 20 years without a renovation plan and a depredating administration by the Mexican Government. The company was grounded for three months. In August, a privatization program was underway. This involved retiring the eight Douglas DC-8's (3 -62s and 5 -51s) along with the remaining ten DC-9-15 aircraft. Starting the privatization process included a new corporate name being Aerovias de Mexico SA de CV. The airline restarted operations with assets left from the predecessor, this includes: Headquarters building, Maintenance Hangar, some aircraft and a certain amount of personnel that worked for Aeronaves de Mexico.

1990s
The early 1990s were turbulent times, with the rise in fuel costs due to the Gulf War, and a domestic fare war caused by start up airlines like TAESA, SARO, Aviacsa, among others, as well as constant labor problems. In April 1991 the first two 767-200ERs were introduced to the fleet starting to replace DC-10's in services to Europe, New York and Tijuana, another two 767-300ER's joined the fleet later that year, all this was part of a renovation and expansion program to introduce 24 757's/767's, Direct service to Madrid and Paris from Mexico City with 767's was introduced as well services to Frankfurt via Paris and Rome via Madrid.

In 1992 Grupo Aeroméxico was among other investors that failed to consummate the acquisition of Continental Airlines.

After failing to invest in Continental, Aeroméxico acquired the bankrupt Aeroperú from the Peruvian government. They tried to use the same path that led Aeroméxico to the leadership in the domestic market with AeroPeru.

On 1993 Aeroméxico Group took over Mexicana the second largest airline in the Mexican market under the same management there was a great dispute in June 1993 with the pilot union regarding the transfer of flights to regional subsidiary Aeromonterrey, which had non-union pilots.[12] Between 1994 and 1995 the six DC-10 aircraft in the fleet were finally retired. Their last revenue flight was in Mid 1995.

In December 1994 3 weeks after Carlos Salinas left the office the first of several devaluations in the next 18 months started, and there was a huge economic crisis in the country Aeroméxico had to cut capacity flights to Frankfurt and to Rome were canceled, 4 MD80's 4 767's returned to the lessors, early retirement for pilots and another staff was on their way, a new 767 was due on April 95 and was transferred to Lan Chile flights to Madrid and Paris were operated only by 2 767-300ER's.

In 1996 Cintra was created in order to avoid the two main carriers went bankrupt some 757's of the original Aeroméxico renovation program ended up un Mexicana and AeroPeru. The market and the airline recovered between 1996 and 1998 8 Md-80's were leased back as well another 2 767-200's.

The sale of Grupo Cintra was scheduled after several delays in September 1999, and with the looming presidential elections in 2000, everything was delayed once again. The ruling party lost the election after 70 years in office and all the policies changed. Due to the recession in 2000 the new government put everything on hold waiting for better economic conditions to start the stock sell-off, and just when they were everything was about to start, the 11 September 2001 attacks occurred and nothing materialized since the two main carriers Mexicana and Aeroméxico (as most Legacy carriers) were losing large amounts of money.

In the period between 2000 and 2005 Aeroméxico had an average fleet of 60 aircraft in main line, plus 20 in Aerolitoral, as well as five CEO's during this time. After 9/11 and the Iraq War, it was forced to put in movement an ambitious fleet renovation program. In 2003, the airline acquired its first Boeing 737-700 instead of the Boeing 717 as a replacement for its aging DC-9 aircraft. On 29 March 2006 Aeroméxico CEO, Andrés Conesa announced the inauguration of direct flights between Japan and Mexico City via Tijuana. This was after the purchase of two Boeing 777-200ER, making Aeroméxico the third airline in Latin America to fly regularly to Asia, after Varig and the now defunct VASP. However, because of Varig's redimention, Aeroméxico is currently the sole airline with this service until some other Latin American airline starts flying to Asia. Aeroméxico has resumed its Mexico City-Tijuana-Shanghai route twice a week as of 30 March 2010. Suspension of this flight was due to the 2009 flu pandemic.

On 29 June 2006, the International Lease Finance Corporation (ILFC) and Aeroméxico announced that the airline will operate 3 Boeing 787 Dreamliners. Aeroméxico will lease the 5 787-8s from ILFC with deliveries scheduled to begin in early 2012, another 2 planes on lease from ILFC will be in service by 2013, and 2 more in 2014. It was originally going to be delivered in 2010 and 2011, but it was delayed for 2 years. From 2006, Consorcio Aeroméxico S.A. de C.V., the parent company of Aeroméxico at the time, was facing large debts and could not make any profits to pay them off. This forced the company to offer Aeroméxico for sale in 2007. In early October, a week-long auction was held, with Grupo Financiero Banamex competing against the Saba family. Finally, in 17 October 2007, Banamex had put forward the highest bid, and the airline was sold to the bank for US$249.1 million. In October, 2010 Aeromexico's largest competitor Mexicana de Aviacion filed for bankruptcy and was placed into administration.

On 25 July 2012, Andrés Conesa, Aeromexico CEO announced the purchase of 10 Boeing 787-9 Dreamliner, albeit 6 firm orders and 4 options; with this, the company will become the first Mexican carrier to have this kind of equipment. In early July 2012 it was reported that the company was looking at Airbus A320 and A350, but ultimately decided on the aircraft manufacturer Boeing. The new order is added to the package of 20 aircraft that the company had announced in 2011 and nine more Boeing 787-8 Dreamliner already provided. The delivery of the Dreamliners began in the summer of 2013. The total investment is US$11 billion and that includes the acquisition of 90 Boeing 737-8 MAX which will be delivered during 2018. The airline took delivery of its first Boeing 787-8 Dreamliner (albeit leased from ILFC) in early August 2013 and officially launched commercial service on 1 October 2013