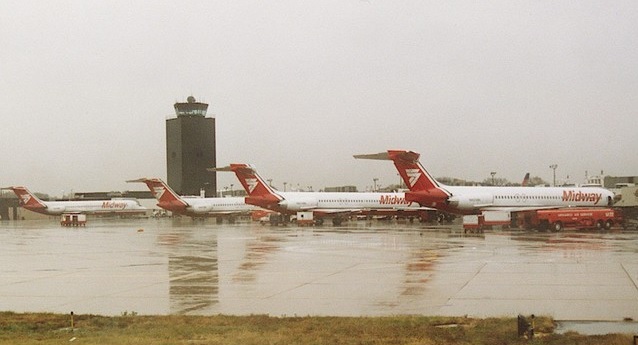 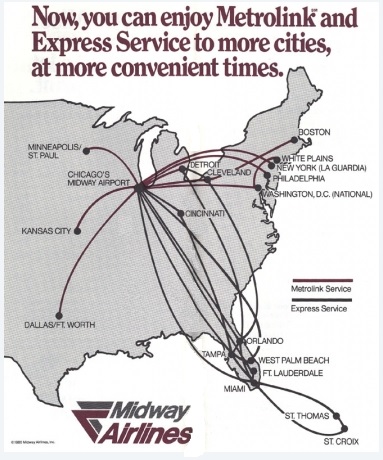 Midway Air Shuts Down After Buyout Is Abandoned

Published: November 14, 1Midway Airlines said it had ceased operations early this morning. The announcement came just hours after Northwest Airlines said it was abandoning its effort to acquire the small Chicago-based carrier.

Midway, which employs 4,000 people, had been trying to reorganize under Chapter 11 of the Federal Bankruptcy Code and will now probably have to liquidate.

A recording on Midway's reservations phone line advised ticket holders to contact their travel agents and credit card companies. In past airline shutdowns, other carriers have honored tickets.

Midway Airport in Chicago, the home base for the airline, said no flights were scheduled in or out of the airport around midnight central time, when the airline ceased operation. There were also no Midway flights scheduled at La Guardia Airport in New York at that hour.

The carrier's collapse is another significant blow to deregulation, which had sought to create several airlines able to compete with older, larger carriers.

If Midway liquidates, only one important airline created after the industry was deregulated in 1979 will be left, America West Airlines. But it has also had troubles and is operating under the protection of the bankruptcy code.

Midway was born shortly after deregulation began. It underwent several changes in strategy, becoming an airline that provided upgraded service at coach prices to attract the business flier. The strategy did not succeed since Midway could not match the frequency of flights of competitors like United Airlines and American Airlines. Unlike the big carriers, Midway was unable to offer the frequent-flier programs that attract business travelers.

The airline struggled along, however, by offering lower fares than its competitors. It also had advantage of flying into Midway Airport, which is closer to downtown Chicago than O'Hare International Airport, which handles most flights.

The carrier was already financially weakened before the Persian Gulf war cut traffic and caused fuel prices to double.

Midway issued a statement late last night from Chicago, saying: "As a result of Northwest Airlines' unilateral decision to withdraw from its commitment to acquire substantially all of Midway's assets, effective midnight, Wednesday, Nov. 13, Midway will cease operations.

"Midway deeply regrets the inconvenience caused to our loyal customers by the cancellation of all Midway service." Analysts Speculate on Motives

The collapse of the deal with Northwest prompted analysts to wonder whether Northwest wanted to get out of the deal for some hidden reason or whether it simply felt deceived by Midway, as Northwest's president, John H. Dasburg, contends.

On the surface the deal was small potatoes. Northwest agreed to acquire the carrier mostly by assuming debt of about $153 million. The agreement was approved by the Federal court overseeing Midway's bankruptcy reorganization.

There have been concerns about Northwest's viability, however, since Alfred Checchi and a group of investors took over the carrier's parent, NWA Inc., in a $3.6 billion leveraged buyout in July 1989.

But earlier this week, Northwest considerably strengthened its balance sheet. Minnesota agreed to provide the airline with a package of financial assistance worth about $740 million.

The package includes a $390 million loan to the airline backed by the Metropolitan Airport Commission. Another $350 million will be used to build two maintenance bases in Duluth and Hibbing.

Jeffrey W. Hamiel, the executive director of the airport commission, said the agency had been seeking to find out what kind of economic impact an acquisition of Midway would have on Northwest.

As such, the agreement to buy Midway could have threatened to unravel the financial package.

The package is a coup for the airline, which is getting the state and its agencies to help it pay off its debts. In return, the airline must put up some assets as collateral and promise that it will not move its headquarters from Minneapolis. The package still has to be approved by some state agencies.

Accompanying the good news, however, was a dose of bad news from Price Waterhouse, which did a financial analysis of the airline for the Metropolitan Airport Commission. Large Losses, Large Debts

"Northwest has recently incurred large losses, continues to hold a large portion of acquisition debt and has little equity," the accounting firm said. "In addition, its prospects for the future are dependent on many circumstances that it does not control."

Thus, the financing agreed to by the state, it said, "has significant elements of risk."

The analysis has caused an outcry among legislators and the public, some of whom see the state becoming involved in a Chrysler-style bailout.

In order to get the state to go along with the financial package, Northwest had to be on its best financial behavior to reassure nervous officials that its future was secure.

Acquiring a Midway was not the best deal to reassure these officials. Midway has been losing close to $1 million a day.

The feeling among Midway executives is that they have been made the fall guy here.

The executives, along with some analysts, believe that Northwest was looking for a way to back out of its agreement to buy Midway and that assertions that Midway had provided misleading information about its finances was a smokescreen to hide the real reason. Midway's Point of View

The Midway executives contend that they provided Northwest with their own internal data on revenue and yields -- the amount of revenue generated by a passenger flying one mile -- which gave Northwest accurate information of the airline's condition for the last year.

But Mr. Dasburg of Northwest said the airline had understated its traffic by about 13 percent and overstated its yields by about 25 percent.

Kevin Murphy, an airline analyst for Morgan Stanley & Company, sees a connection between Northwest's getting the financing from the state and the airline's decision to drop the Midway deal.

He said Northwest appeared to be under pressure from Minnesota and the airport commission to be conservative in any acquisition.

As a result of the failed deal, Midway shut down. Midway was only able to keep operating as long as it did because it had received a loan from Northwest.

Mr. Murphy also said Southwest Airlines, which had made an early bid for Midway, might now no longer be interested in the carrier.