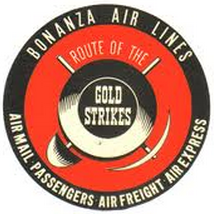 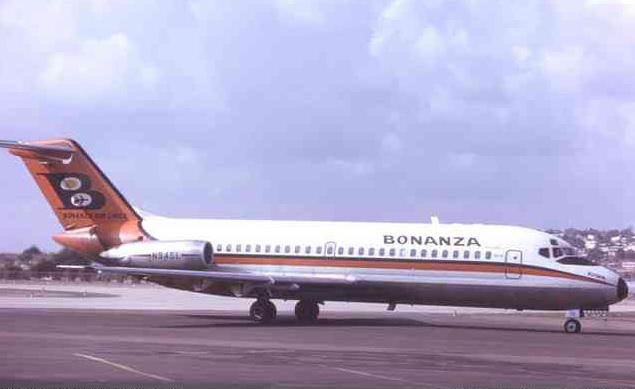 The company was created in 1945 and based in Las Vegas and was known at the time as Bonanza Air Services in Las Vegas. The company was part of a Civil Aeronautics Authority effort to develop regional airlines called "local service airlines."

During the later part of the 1940s and especially through the 1950s, the carrier

In 1959 Bonanza introduced Fairchild F-27 turboprop aircraft (nicknamed the Silver Dart) and applied for additional routes to Texas (although these routes were never operated) It appears that Bonanza may have been the first scheduled fixed-wing airline in U.S. to introduce all-turbine powered aircraft into their fleet as the DC-3 aircraft were phased out from scheduled service in late 1960. One of the destinations served by Bonanza with the Fairchild F-27 propjet was Grand Canyon National Park Airport in northern Arizona with flights to Las Vegas, Phoenix and Tucson. The workhorse F-27 twin turboprop was also utilized to provide service to a number of other destinations in Arizona as well as cities in Nevada, Utah and southern California.

In an attempt to enter the jet-age, the carrier ordered three British Aircraft Corp. BAC One-Eleven twinjets in October 1962; however, this request was denied by the United States government, although U.S. authorities then allowed American Airlines, Braniff International Airways, Aloha Airlines and Mohawk Airlines to purchase new BAC One-Eleven jets. In light of the denial, an order was placed for the U.S. manufactured twinjet equivalent at the time, being the Douglas DC-9 series 10. Deliveries of the new DC-9 jetliner began in late 1965 and services commenced with the type on March 1, 1966. The DC-9s, dubbed Funjets, were deployed on the following routes within the first year of service: Las Vegas—Reno, Las Vegas—Los Angeles, Reno—Los Angeles, Salt Lake City—Phoenix, and Reno—Las Vegas—Phoenix. The headquarters were moved to Phoenix during 1966.

A fantastic site covering everything regarding Bonanza Airlines: