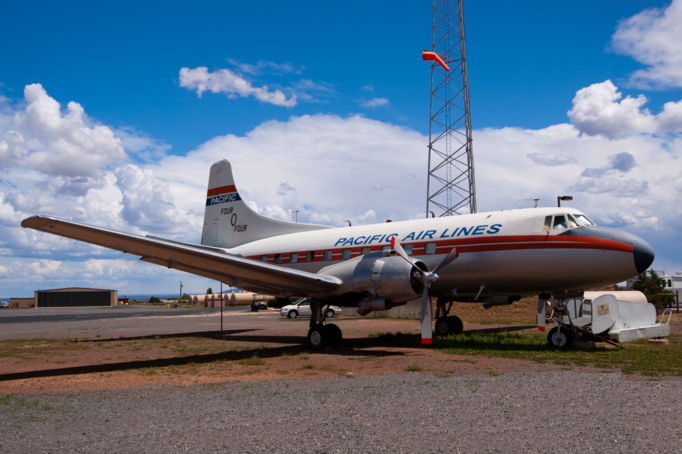 Pacific Air Lines was a regional airline (then called a "local service" airline as defined by the federal Civil Aeronautics Board) on the West Coast of the United States which began scheduled passenger operations in the mid 1940s under the name Southwest Airways. The company was essentially a feeder airline, primarily linking smaller communities in California with larger cities such as Los Angeles and San Francisco. Flights were also operated to Portland, Oregon and eventually reached Las Vegas and Reno in Nevada.

Founded largely with money from investors from the Hollywood motion picture industry, the airline was noted for innovative safety practices and cost-saving procedures.[2] The name Pacific Air Lines passed into history in 1968 in a merger with Bonanza Air Lines and West Coast Airlines, forming Air West which then became Hughes Airwest.

In early 1941 Air Service veteran John Howard "Jack" Connelly and noted Hollywood agent/producer Leland Hayward formed a business partnership that five years later would evolve into a scheduled commercial airline. Neither man was a stranger to aviation; Connelly was also a former test pilot, airplane salesman, Civil Aeronautics Administration instructor pilot, and inspector for the 1930s-era Soviet Union. Hayward was an active private pilot and was on the board of directors of Transcontinental and Western Airlines (TWA). The two men enlisted the support of commercial pilot and photographer John Swope to oversee the training of aviation cadets. Together, they founded a maintenance depot for overhauling training aircraft, a wartime air cargo line, and a military pilot training complex consisting of Thunderbird Field No. 1, Thunderbird Field No. 2, and Falcon Field in Arizona. By the end of World War II, Southwest Airways was the largest training contractor in the United States, and trained more than 20,000 pilots from over two dozen countries.

After the war Connelly and Hayward raised $2,000,000 from investors including James Stewart and Darryl Zanuck to expand Southwest into the airline business, pending government approval. They were awarded a three-year experimental charter from the Civil Aeronautics Board on May 22, 1946 for their feeder service.

In August 1953 Southwest scheduled flights to 23 airports, all in California except for Medford. In May 1968 Pacific flew to 29 airports.

Connelly serves no food ("let them bring their own"), provides no chewing gum ("we never fly high enough to need it and besides it sticks to the floor") or magazines ("takes too long to unwrap them")

Connelly, president, and Hayward, board chairman, were the majority owners of the airline, and as such could hold sway concerning how the company would operate. Running on slim operating margins, Southwest Airways was a no-frills airline decades before low-cost carriers became common.

The airline speeded ground operations to the point where a DC-3 could load and discharge passengers and begin taxiing for takeoff 90 seconds after coming to a stop (adding six minutes if fuel is needed). To save money the airline had their own pilots do the refueling instead of paying airport personnel. Ground time was reduced by keeping one engine running while a male purser quickly escorted passengers to and from the plane. Pacific's DC-3s were modified with an 'airstair', a door that doubled as a staircase for passengers. The airstair eliminated waiting for a ground crew to roll a wheeled staircase up to the plane.

In August 1953 a daily Southwest DC-3 was scheduled SFO to LAX in 3 hr 45 minutes with eight stops.

The airline's innovative spirit extended into air safety as well: in December 1947 a Southwest Airways DC-3 flying into the coastal town of Arcata, California made the world's first blind landing by a scheduled commercial airliner using Ground-Controlled Approach (GCA) radar, Instrument Landing System (ILS) devices and Fog Investigation and Dispersal Operation (FIDO) oil-burning units adjacent to the runway. By the following year the airline had made 1,200 routine instrument landings at the often fog-shrouded Arcata airport.

By 1948 Southwest had a fleet of ten planes, all Douglas DC-3s, and was flying between 24 airports in California and Oregon, thus becoming the second largest feeder airline in the United States.

The airline had no fatal accidents until the evening of April 6, 1951 when Southwest Airways Flight 7 crashed, killing all 19 passengers and 3 crew members, including 12 military personnel.  The DC-3 was flying a 20-minute route between Santa Maria and Santa Barbara in California. The aircraft struck a ridge in the Refugio Pass region of the Santa Ynez Mountains at a height of 2,740 ft (835 m), far below the minimum nighttime altitude of 4,000 ft (1,219 m) prescribed for the route over that stretch of mountains. The Civil Aeronautics Board was unable to determine the cause.

By late 1952 the airline's fleet included eight secondhand piston-engined Martin 2-0-2s, faster and larger than the DC-3.[13][note 1] In the 1950s the airline's literature said it reached 33 California locales (i.e. 24 airports) and timetables in the mid-1950s boasted that Southwest Airways "serves more California cities than any other scheduled airline."

The airline became Pacific Air Lines on March 6, 1958. The corporate logo was changed from an earth-toned Thunderbird reminiscent of a Navajo sandpainting to a simpler, modern design with bright colors. In a move possibly designed to prevent the flying public from confusing the newly named Pacific Air Lines for a brand-new airline, company timetables published in 1959 asserted that the company was in its "17th year of scheduled service".

Like other Local Service airlines Pacific was subsidized; in 1962 its operating "revenues" of $12.1 million included $4.1 million Federal subsidy.

Martin 4-0-4 in Pacific Air Lines colors at Camarillo, California, January 3, 2008. A lowered airstair is seen below the tail.

In 1959 Pacifc added the first of fourteen secondhand pressurized Martin 4-0-4s. Pacific's first turbine powered aircraft, the Fairchild F-27 twin turboprop (a U.S.-built version of the Dutch manufactured Fokker F27 Friendship) was added to the fleet. In 1960 a gradual phase-out of the DC-3s began with the last of thirteen leaving Pacific's fleet by mid-1964, and the last Martin 2-0-2s were retired in March 1964. The Martin 4-0-4s and Fairchild F-27s then became the workhorses of Pacific's fleet. One F-27 route during summer 1964 was a "milk run" with numerous stops: flight 771 flew Reno-Lake Tahoe-Sacramento-San Francisco-San Jose-Fresno-Bakersfield-Burbank-Los Angeles-San Diego. It left Reno at 6:00 a.m. and was scheduled to arrive San Diego at 12:10 p.m.

Flights to Las Vegas started in 1957, to Reno and San Diego in 1962, and to Lake Tahoe in 1964; Portland, Medford, Reno and Las Vegas were the only cities Pacific ever served outside California.

The first U.S. hijacking attempt took place on board a Pacific Air Lines plane on the ground at the Chico, California airport on July 31, 1961. The pilot and a ticket agent were both shot; however, the assailant was then overpowered by the co-pilot and passengers while the plane was on the ground.

When jets were added to Pacific's fleet, the design of the bird that has always been the airline's symbol was transformed into a more streamlined silhouette of a bird in flight.

On September 13, 1965 Pacific Air Lines announced it would acquire six new Boeing 727-100 jets, leasing two immediately and placing orders for the remainder to be delivered in early 1968. The jets were ordered during a prosperous time for the airline, but net income for Pacific dropped from $700,337 in 1965 to $150,716. chiefly because the 727 was uneconomical to operate on Pacific's short haul routes. Two were then leased to National Airlines.

One early 727 route was San Francisco-Monterey-Santa Barbara-Los Angeles which according to the January 1967 timetable was served with three daily roundtrips. In 1968 the airline was flying 727s Los Angeles-Fresno-San Francisco-Eureka/Arcata, San Francisco-Monterey-Los Angeles and Los Angeles-Fresno-Reno. Pacific flew 727s nonstop from Burbank and Fresno to Las Vegas, and nonstop from Fresno and San Jose to Reno. The airline pioneered scheduled jet service to Bakersfield, Eureka/Arcata, Fresno, Lake Tahoe, Monterey and Santa Barbara with the 727.

Pacific planned to order Boeing 737-200s which were more economical to operate than the 727s. However, events overtook the airline in the form of a merger to form Air West and the order was cancelled.

After the merger with Bonanza Air Lines and West Coast Airlines, the new Air West soon removed Pacific's 727s from the fleet although they were operated in scheduled service for a brief time to such cities as Las Vegas, Los Angeles, Monterey, San Francisco, Santa Barbara and Salt Lake City.[26] The primary jet aircraft types operated by Air West were Douglas DC-9-10s with these twin jet types being flown by Bonanza and West Coast. New McDonnell Douglas DC-9-30s would soon join the fleet as well. The successor to Air West, Hughes Airwest then added Boeing 727-200s in the 1970s. Air West and Hughes Airwest retained Pacific's Fairchild F-27 turboprops as Bonanza and West Coast also operated the F-27.

In 1967 the airline embarked on a controversial advertisement campaign, including a full-page ad in the New York Times on April 28, 1967, that highlighted the fear of flying, a subject rarely mentioned by airlines. Pacific had hired award-winning advertising executive and comedian Stan Freberg for the ad campaign, knowing that unconventional ideas were his forté. Under his direction print advertisements said::

“              Hey there! You with the sweat in your palms. It's about time an airline faced up to something: Most people are scared witless of flying. Deep down inside, every time that big plane lifts off that runway, they wonder if this is it, right? You want to know something, fella? So does the pilot, deep down inside.            ”

The copy from another ad said:

To complement the ad campaign flight attendants handed out "survival kits" featuring hot-pink lunch pails containing a small security blanket, a "lucky" rabbit's foot, the best-selling book The Power of Positive Thinking, and a fortune cookie containing the slogan "It could be worse. The pilot could be whistling "The High and the Mighty." The attendants were also encouraged to exclaim "We made it! How about that!" upon landing.  Freberg had unfulfilled plans to paint a Pacific Boeing 727 to resemble a locomotive, with wheels on the fuselage and a cowcatcher on the nose. Inside the cabin, passengers would have heard a recording of a steam locomotive over the loudspeakers.

Matthew E. McCarthy, Pacific's chief executive and biggest shareholder, explained the campaign: "It's basically honest. We spoof the passengers' concern, but at least we admit they have it." Philip H. Dougherty, writing in the Business and Finance section of the May 1 edition of The New York Times, described the advertisements as "rather shocking". Objections to the unorthodox campaign were raised at a May 1967 stockholders meeting, and two Pacific Air Lines executives resigned in the wake of the controversy. When the Boeing 727 jet order was optimistically announced by the airline in 1965, it was unforeseen that a change in the business climate was on the horizon and that economic realities would dictate that some of the jets would not actually end up flying under the Pacific Air Lines banner. Stiff competition from rival air carriers such as Pacific Southwest Airlines (PSA) and United Air Lines were factors in Pacific Air Lines joining forces with Bonanza Air Lines and West Coast Airlines in a three-way merger which resulted in the creation of Air West in 1968. Air West later became Hughes Airwest which was subsequently merged into Republic Airlines in 1980. Republic in turn was acquired by Northwest Airlines in 1987. Northwest was then merged into Delta Air Lines in 2008. At the time of the Air West merger, Pacific's fleet included eleven of their workhorse Fairchild F-27s, five Martin 4-0-4s,[13] and three Boeing 727-100s, one of which was still leased-out but returned to Air West in late 1968. The last of the increasingly obsolete Martins were not carried forward into the Air West fleet and were disposed of in August 1968.

The two co-founders of Southwest Airways died within nine months of each other in 1971. John Connelly was 71, and Leland Hayward was 68 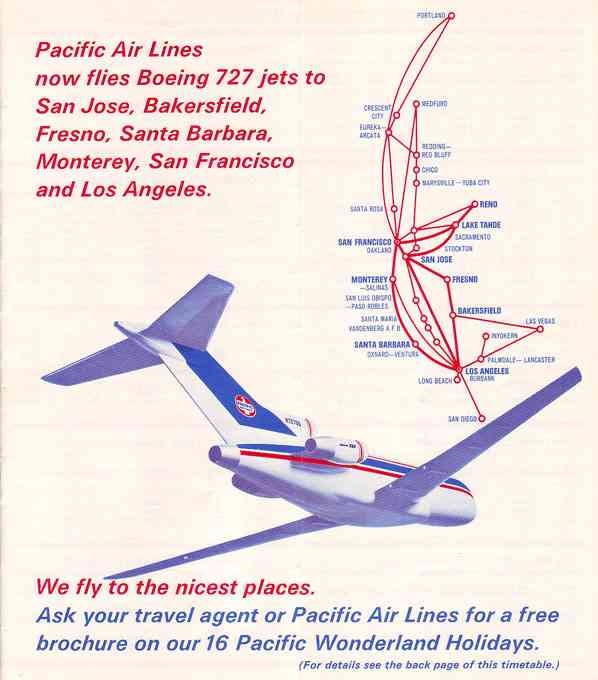