The airline began operations in 1945 as Robinson Airlines out of Ithaca Municipal Airport near Ithaca, New York, flying single engined, three passenger Fairchild F-24 aircraft. As they grew in the 1950s, the Douglas DC-3 became its primary aircraft; the Convair CV-240, CV-440s and Martin 4-0-4s were integrated into their fleet later. The airline also experimented with helicopter service between New York and Catskill Mountains resorts with limited success.

In 1952 Robinson was purchased by Robert Peach, and the name was changed to Mohawk Airlines as the result of a customer contest. In 1958, the airline moved their headquarters to Utica, NY, in the heart of the Mohawk Valley.
On February 11, 1958, Ruth Carol Taylor was hired by Mohawk Airlines, becoming the first African-American flight attendant in the United States. Only six months after breaking one historic barrier, Ruth Taylor's career ended due to another discriminatory barrier: the airline's marriage ban, a common practice among airlines of the day. Airlines often dismissed flight attendants who either married or became pregnant.
In 1961, Mohawk became the first airline to use a centralized computer-based reservation service, and in 1965, they became the first regional airline to utilize flight simulators. Mohawk also upgraded their fleet with the British Aircraft Corporation BAC 1-11 in 1965, becoming the first regional airline to inaugurate jet aircraft service.

By 1969, all piston-engined aircraft had been retired from their fleet and Mohawk flew mainly BAC 1-11 and the twin turboprop Fairchild Hiller FH-227.
From 1968 to 1971, labor and economic issues bled Mohawk financially. Unable to pay creditors at the end of that period, Mohawk entered merger discussions with Allegheny Airlines, and the merger was completed in 1972. The resulting company eventually became USAir in 1979, changing their name to US Airways in the late 1990s. US Airways was acquired by America West Airlines in 2005, who chose to maintain the more nationally recognized name of US Airways. 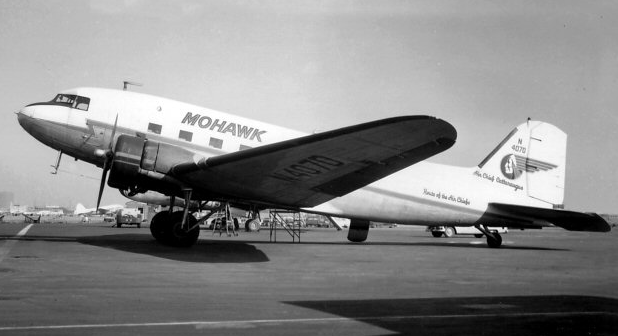